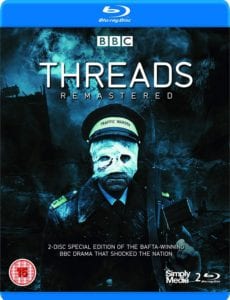 Sheffield, England in the 1980s. Several people try to survive post-nuclear devastation, suffering from the effects of nuclear war between Russia and the United States. 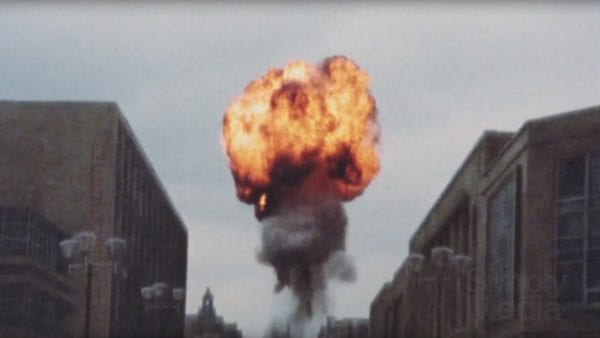 While the world isn’t exactly the same as it was back when this film was produced, the timely nature of this release of a remastered version of Threads should not be lost on a country that can look out the window and see grey skies, frozen fields and shivering people walking the streets. An over exaggeration in order to compare today to the days of the Cold War? Most certainly. But a sheet of ice on grey pavement would be a fitting metaphor for Threads, a movie that revels in its simplicity.

Various individuals from Sheffield (though they could be from anywhere in Great Britain) are shown, setting these people up for, if it weren’t seemingly for the flip of a coin, what could very well have been reality. That reality is nuclear devastation. Several nuclear bombs are detonated on and around Great Britain, laying waste to infrastructure, homes and lives.

A low budget release compared to other media that have dealt with similar scenarios, Threads’ strengths come not in what could be perceived as overproduction or even what is standard nowadays. This isn’t The Road or Call of Duty: Modern Warfare. Threads is more akin to a documentary, with a narrator and information displayed on a screen lending a helping hand to the realism on display.

The film does have limitations when compared to what is shown onscreen by other movies. Movies that could use CGI to show the destruction of a city. Threads doesn’t need that, instead trading in high production values for a plainness of delivery; a sense that it is telling you what will happen without dressing it up and presenting it all with a sheen. For example, the juxtaposition of the quiet home life of various characters and the brash noise of text being typed onscreen is a nice little touch to add to the tension, a tension that can be felt because the viewer is the only one who knows what’s coming. The feeling that a government is doing its best to produce some best laid plans but is still cobbling things together. This is conveyed with the simple visual of the official war book (a book of procedures in case of nuclear war or similar) having handwritten amendments on the front page. 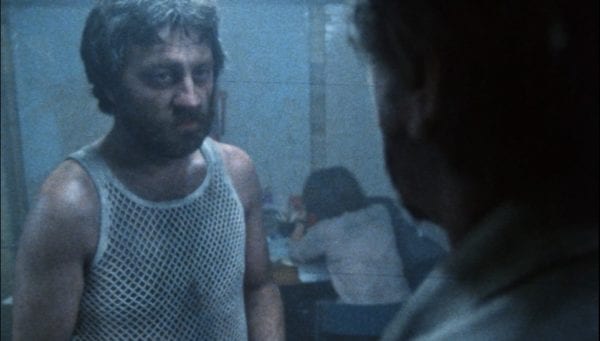 In a way, the movie is terrifying in that these people have no control over their lives and, like in most peoples’ cases, have no control over when their lives will come to an end. The horrors of such a situation are dealt with plainly and matter-of-factly. For those expecting something else, these main characters are protagonists, but they are not heroes. No one is going to save the day at the last minute. No one is going to push that little bit harder to save lives and ‘win’. No one wins. People are lost track of. Others perish, unable to escape. Some are separated from loved ones, dying in the place they happened to be when the bombs dropped, alone. This slow, remorseless path is exemplified by the steady transitioning of what’s on television, from news reports of troubles in a faraway land all the way to a public service message on what to do with a dead body in your house.

There are certain shortcomings. Some might not connect with a movie that sometimes cuts away to photographs of destroyed buildings instead of staying with the moving image. Questions about character motivation appear when soldiers disconnect from the plight of the public startlingly quickly. The amount of foreshadowing in the first fifteen or so minutes is also a little on-the-nose.

However, startling images (charred corpses, dead children cradled or simply left in the street and a particularly jarring final shot) give the impression Threads doesn’t want to coddle the viewer. Instead it wants to soberly present what would happen if those in power picked the wrong choice. Those images and the plight of characters simply trying to survive are what stick in the mind. It’s a tough slog of a movie, one where a deep sigh and a pick-me-up might be necessary afterward. It depicts an unforgiving world. A pervasion of unrelenting darkness.