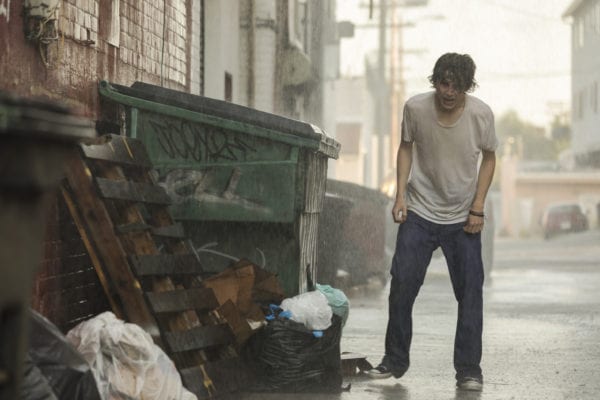 What was it like to try and adapt two different memoirs? Because I suppose one would be difficult enough, but dealing with separate perceptions of the same events would be even moreso?

Yeah, it was. There are so many challenges in adapting source material, as opposed to an original script. It’s like double the challenge if there are two books. The good thing was it’s absolutely not like Rashomon, the Kurosawa film where the same story is told from three perspectives, because that movie’s talking about the subjectivity of truth, or of so-called truth. In fact, these two books in their very different styles very reliably track the same events. When we first started drawing up charts of the timelines, there weren’t any clashes between the two books about what went on. There was just a different psychological perspective of how those events were being experienced by the two main characters. It somewhat lessened that challenge of perspective, which was obviously the major challenge.

The majority of films have a central perspective, most films have a central protagonist. The question with us was ‘is this a two hander or is there a central protagonist?’ – how it landed was that it’s sort of 55% David, 45% Nic. To us, the central thing became that it became essentially one guiding principle. At the heart of the movie, it’s the love and the tempestuous relationship between father and son. That in itself becomes a kind of character. That is the glue that holds the movie together and that is the navigational device that gives the movie its direction.

You’ve also been a film critic yourself – I was wondering how that practice informs your screenwriting?

Yeah, uhm, I don’t know. I, fairly consistently for 10 years, was the film critic for this Australian magazine, The Monthly. When I moved to America 10 years ago – well, 11 years ago now, almost 12 -for 6 or 7 years I didn’t even know what I was doing. It was very difficult to sell a book. I wasn’t attached to the system. I couldn’t get an agent. I couldn’t get a meeting. That job, writing those film reviews for that magazine, was kind of like my pay the rent money or my survival money, basically. It wasn’t a lot, but I could rely on that money.

I loved that job. I loved writing about film. I loved the excessive focus they give you to think, breathe, and live film. I’m a true passionate cinephile and always was. It wasn’t a given to me, that the path I was on as a poet and a novelist would mean that I would eventually become what I am now and write screenplays. I think my obsessive passion for film would never have changed or gone away. I think that being a film critic is a fantastic training ground for being a screenwriter because being a film critic, you are constantly analysing in a good sense what people are doing structurally that makes a film successful or not successful. Eventually when that ship comes in, you’re like, “Oh, my God. I have an opportunity here to try my hand at writing screenplays,” which in my case was the moment negotiating power with Candy when I got to say to the producers, “Okay, I’ll send my novel to you, but you have to allow me to have a stab, have first shot, at the screenplay”.

You know, I think of Jean-Luc Godard and all of those French guys who were the driving force behind that magic French cinema in the 50s, who were all film obsessive guys taking great delight in writing about film as great writing. They all became really interesting filmmakers. I love that connection between their earlier selves in their 20s and so on as film critics, film writers, and their latest films as significant filmmakers in the emergence of New Wave Cinema in the 60s. So, yeah, I think being a film critic is excellent training for becoming a screenwriter.

Almost on the other side of that, then, has there ever been a criticism of one of your own films that’s gone on to impact how you approach future projects?

No, I don’t think so. Maybe there’s something I’m not thinking about, but that would be a huge thing. People have, critics, have taught me to be… Well, two things. It’s taught me to be really tolerant about criticism of things that I’ve written, particular criticism that hurts. It’s taught me to try and take a breath and a moment to get past the hurt and try and respect what the film reviewer is saying. On those rare times where it’s like, ‘I’m really pissed off at this’, [it’s because] that film review is pontificating about, it’s theorising about something that the film is not trying to do.

In retrospect, other criticisms have, I hope, helped me become a better critic, because it’s made me try always to set up for the reader my understanding of what the filmmaker is trying to do. Therefore, the review is ‘have the filmmakers succeeded on their own terms with what they’re trying to do?’ – The film reviews that have rankled me are the ones which talk about an imaginary film that the film reviewer wanted to review as opposed to –

The film they did see.

Yeah, rather than the film the filmmaker is trying to make for the audience he’s trying to make. Who’s he, or he or she, tried to reach and have they succeeded on those terms? No, I don’t think there’s anything that, especially a film review, that’s changed my practice – although it’s a really great question and if I suddenly think ‘oh, I know what you’re talking about’, and have a great answer, I will contact you back and let you know.

There’s some interesting anecdote there, but I can’t think of it right now. 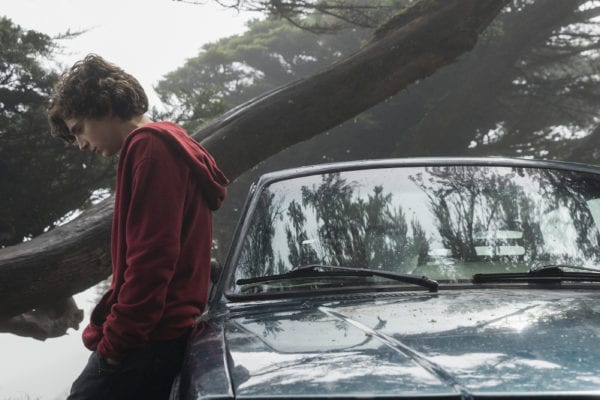 I suppose there’s a line of criticism, or a school of thought, that would class something like Beautiful Boy an ‘issues’ film, and maybe say it’s part of a genre that’s almost manipulative – what would you say to that?

It’s a fine line. It’s complex, right? For example, the cards that appear at the end of the film, I was not a part of writing those, that was in the aftermath of the film. I have mixed feelings about them If the film’s done its job in opening up a conversation about the scourge of addiction that’s sweeping across America – not just America, but the Western world, let’s say at the moment – and if it reaches out to people who are having to endure this in any way that has a positive effect, that’s a good thing. As filmmakers, we have responsibilities to not just make the film as an aesthetic object and drop it in the world and walk away, but to be connected and be responsible to actually helping save lives.

On the other hand, the purist in me wants the film to be a singular thing that tells its story, and beyond that? How it affects people is a great thing, because film makes an impact, but I have that slight feeling that [the cards] makes it feel like borderline PSA, a public service announcement, here, if you need help call this 1-800 number. This was really close to that to me and it wasn’t my decision. Yeah, I had that reservation and those doubts about that.

You’ve seen this film. Yeah, by its very nature it’s… Is it manipulative? Well, all film, including good film, is manipulative. The word has negative connotations when what it means, I think, is that ‘manipulation’ has an agenda that is deceptive and buried. Ultimately, I can support and I live with this film because the agenda is not deceptive. The books are incredibly moving and I can vouch for the fact, as an ex-addict myself, I vouch for their authenticity and their power. And as an ex-addict, or let’s say an addict who is 29 years clean and sober, I believe in the message of the film, which is not even hitting you on the head with a hammer, but which to me says there are no clearcut, black and white answers, but that love is at the centre of the answer and that there’s no guarantee that your loved one will survive the traumatic chaos of addiction.

We can’t hold your hand, but we can show [a story with] the kind of message that is you keep showing up no matter what. As filmmakers, what we tried to do was to not be morally judgmental, to not make one of those movies that is hitting you on the head with a hammer. Ultimately, yes, all films are manipulative, but I prefer the gentle flow of Beautiful Boy, which tells the story, much of which is very distressing, and gets to a point of ambiguous resolution with father and son scene at the end. He doesn’t exactly know how this is going to play out, but the cards give a lovely kind of a relief, especially the one that tells us that they survived all these things. The lovely Nic Sheff is a lovely guy and he’s actually writing his own TV shows and writes films.

That was a bit of a rambling answer, sorry. It’s very complex!

Finally, then – what would you most want someone to take away from watching Beautiful Boy?

The main thing I want in any of my works is for you, the audience, to go away having had an emotionally gripping experience. That’s absolutely the thing that I care about the most, that you were engaged and moved as deeply as possible by a work of art. That’s general, but specifically with Beautiful Boy, that you were made [to understand], that we helped you understand, how complex and difficult to pin down are the edges of this issue of addiction.

Luke Davies, thank you very much!