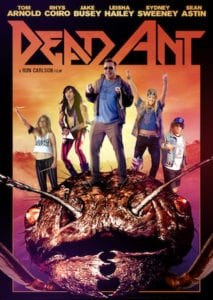 When the 1989 “one-hit-wonder” glam-metal band “Sonic Grave” embark on a trip to Coachella in hopes of a comeback, their peyote trip pit stop in Joshua Tree incites an “unworldly” vicious attack, and they must “rock” themselves out of harm’s way. 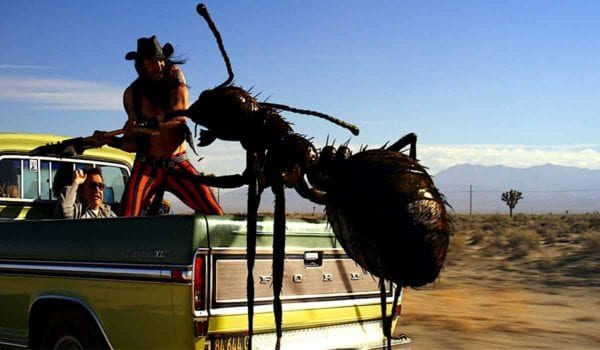 Ron Carlson’s Dead Ant is an amplified blast of smashmouth rockstar spunk dragged down by some pretty freakin’ ugly CGI insects. Not “ugly” as in monstrous or gnarly, either. We’re talking animated composition that barely functions full range of appendage motion, but maybe that’s intended. Carlson’s addition to “Heavy Metal Horror” canon is midnight goofiness of the glam-rockiest decibel. Straightened wigs, huggin’ spandex, squealin’ power ballads and all. Low-budget schlock that should include a bottle of whiskey with every VOD purchase – most of y’all will need it.

In the 80s, Sonic Grave ruled the airwaves with a massively successful arena pleaser. Today, they’re nothing but another “one-hit-wonder.” Manager Danny (Tom Arnold) isn’t ready to give up, so he books the band a gig at Nochella – no, not Coachella. Lead singer Merrick (Jake Busey) wants to unearth their old hits, guitarist Pager (Rhys Coiro) refuses the past, while bassist Art (Sean Astin) and drummer Stevie (Leisha Hailey) couldn’t care less as long they can trip balls. Cue a stop at Bigfoot’s (Michael Horse) desert produce stand to acquire “The Sun” – peyote – with a curse. If any creature is harmed on sacred ground while the band is stoned, they’d be damned until sunup.

“Horror” elements of this Them! with a Van Halen soundtrack are buried under sand never to be found. Creature effects aren’t polished enough to be anything more than late-night SYFY equations. Black bulbous shapes clumped together kicking dust behind a speeding pickup set against the most stand-out green screen canyon landscapes. Animated fire, animated creatures, and a heavy lean into Tom Arnold’s offputting tour organizer/womanizer/horndog/wheezing megaphone fail to permit scares even a fighting chance. You’re watching Dead Ant for the booze, babes, and Busey. 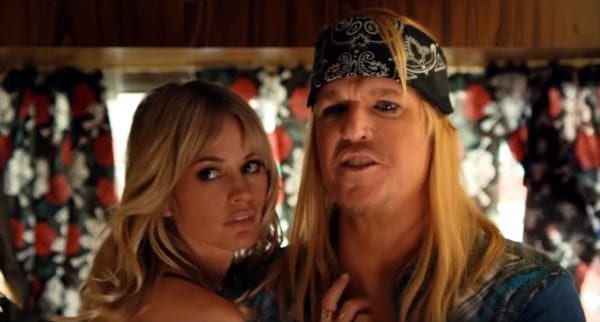 Don’t even ask about continuity which is an ongoing gag itself as – for example – a sedan that previously exploded in flames is later seen intact and ready for resale. Windshield, paint job, mechanics and all.

Compared to other cinematic “doomed bands,” Sonic Grave sells their souls for fame but never reaches the level of competition such as Dethgasm, Wild Zero, or Black Roses. Rhys Coiro riffs an attitude driven stand out as motley dude Pager – rock n’ roll through and through, never sacrificing showmanship when bashing mega-sized ants with warlock guitars or scamming on bikini girls even when death scuffles close behind. Kudos for a “Shire” reference from Sean Astin’s mouth and man, Jake Busey’s stoned philosopher act furthers his transition into Gary-level madness, but Coiro’s aggression against chart pleasers is stage-shaker thunderous. A Dio howl that carries over mountains; an egotistical pretty boy act that respects the headbang.

Unfortunately, Dead Ant isn’t very progressive when it comes to female characters nor is it positioned as a faithful ode to rock n’ roll history. Case and point: why use a cover of “Cum On Feel The Noize” instead of Quiet Riot’s version (he says knowing the answer is “budget”)? Then there’s Sydney Sweeney as a Nochella festival goer who ends up trapped with Sonic Grave. Your garden variety curvy screamer type there for ogling, skimpy flesh reveals and jiggle-about sexiness. Leisha Hailey the least fleshed out band member as a female percussionist sidekick. The focus here is on sex, drugs, and soulful rock homages – hence hot women needn’t personality when they’re sexpot vixens – but intent is cheap. Circle back around to creature design, and that statement hits even harder. “Someone needs to say a something about my dead friend,” Sweeney cries. “I did! I called her a cute black chick,” Arnold retorts. [Eye roll into infinity.]

Metal horns and “satire” and all that, but Dead Ant plays unfavorably into stereotypes and roadie preconceptions that are never as fun as characters so vehemently assure us they are.

All quality withstanding, there’s a tremendous commitment to bit commanding Dead Ant. Carlson employs a hive mind swarm of attackers, arms Sonic Grave with bug bombs, chews up a single corpse for at least one gnarly death – parts of this proficiently shot landscape accentuation are indeed fun. Be it Pager and Merrick debuting their next hit “Side Boob” or Danny holstering a Keystone and Bud Light with a bottle of Jack to the side, or – yes – one of my *favorite* usages of a film’s title as dialogue. You’ll reach Nochella and you’ll get the inevitable Sonic Grave performance (that sounds eerily like AC/DC’s “Thunderstruck”), and you know what, for how bad these buggers look – really bad – sometimes their ferocity is so insultingly underproduced it’s goofy-good. Cut to Danny Woodburn banging a leather skin drum as Bigfoot’s companion Firecracker, both tooled to the nines with ammo and explosives, driving a jeep into insectoid battle.

Dead Ant falls under the umbrella of exploitation flicks better served by their title than product, but not as wholly as some might expect. Tom Arnold is *exhausting* as he screams “jokes” (his KKK booking anecdote) and yes, once again, visual designs aren’t all that impressive – but Pager spouts some solid lines? Cheers to Sean Astin who wears a Party City trucker costume and still cranks an “11” performance energy, a toast to shredded 80s metal imagination, and a nod for peyote-pusher universe rules that rarely make sense yet couldn’t care less. Same “D-grade exploitation” schtick, new shade of guyliner.