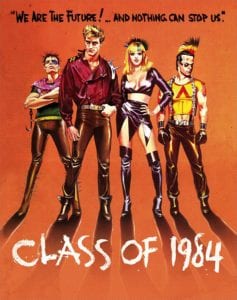 A new teacher at a violent inner city school goes up against a gang of vicious punks. 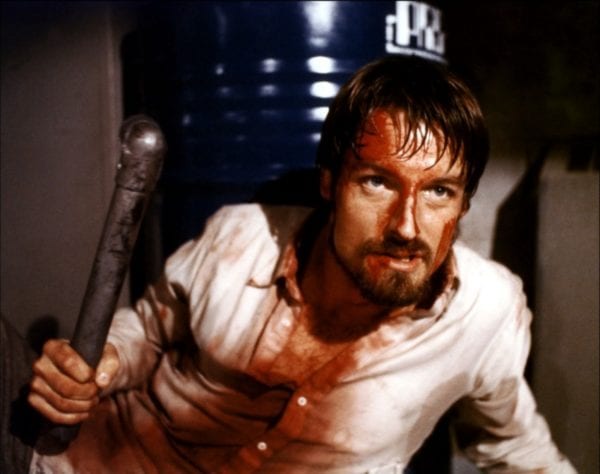 In a month that also sees director Mark L. Lester’s goofy sci-fi actioner Class of 1999 get a Blu-ray release, 101 Films are putting out its predecessor in a rather swanky duel-format package as part of their Black Label imprint for its UK Blu-ray debut. Class of 1984 doesn’t have robot teachers or mad albino scientists like its sequel but it is punctuated with the same social commentary, albeit presented in a grittier, less campy way, and enough of an exploitation aesthetic to draw comparisons with Death Wish and incur the wrath of the MPAA and the BBFC, the latter refusing to issue the film a certificate for its original video release, finally passing it uncut in 2005.

Andrew Norris (Perry King – The Lords of Flatbush) is the new music teacher at an inner city school plagued by drugs and violence, and it doesn’t take too long for the good-natured teacher to make an enemy of Peter Stegman (Timothy Van Patten – Catacombs), the leader of the dominant gang in the school. Stegman and his goons start harassing Andy, who intervenes on several occasions when the other teachers turn a blind eye, and things quickly get personal as Stegman refuses to let Andy’s big night presenting an orchestral concert go off without a hitch, forcing the teacher to take drastic action. 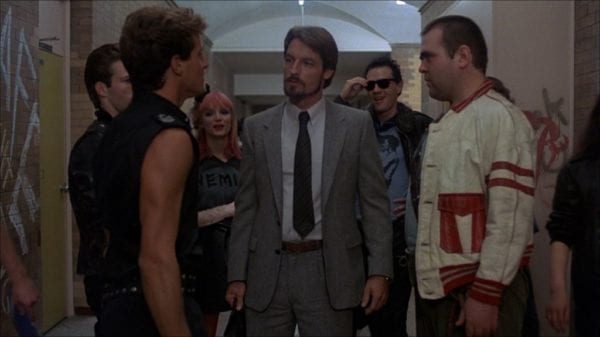 With more of a thriller vibe going on than one would expect from how the film looks and plays out by the end of the third act, Class of 1984 does a good job in keeping the viewer glued to the screen to see what happens next as escalation is the name of the game. Perry King is a very likeable lead and he makes Andy Norris a very relatable character, especially when he sees Stegman for what he really is and not the butter-wouldn’t-melt performance he puts on in front of his mother and the authorities. Norris’ friendship with fellow teacher Terry Corrigan (Roddy McDowall – Fright Night) is also very believable and enforced by making Corrigan a drinker and giving him a very tragic but totally plausible arc (and based on a alleged true event), and McDowall’s presence in the film is very welcome as he adds some much-needed light relief with his wonderfully quirky persona.

Also, a very young Michael J. Fox, complete with puppy fat and pudding bowl haircut, shows up as one of Norris’ students, and apart from his slightly awkward appearance, you can see flickers of the charismatic screen presence that would endear him to audiences a couple of years later. But despite having some very likeable protagonists, Class of 1984 suffers a little when it comes to the antagonists as they are a fairly unremarkable looking bunch. They all have bad attitudes and commit acts that force us to dislike them but unfortunately they are a fairly non-descript looking bunch and, apart from Stegman, are very forgettable. Stegman himself is a strange character as he acts like a total scumbag but looks like a coiffured ‘80s pop star, making the punk outfits that he wears look even dafter than they already did. Remember when Spandau Ballet grew their hair out a bit and wore leather duster coats? Yeah, that. 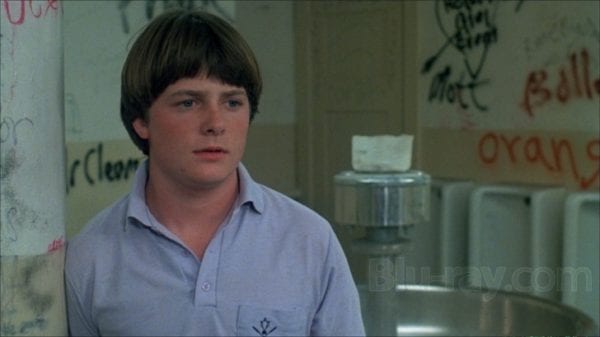 The clashes between Norris and Stegman’s gang escalate in violence until the film’s final act and that is when the Death Wish comparisons come in, making what should have been Andy’s crowning glory in front of his wife and colleagues a nightmare that he neither he nor his wife could ever really come back from and keep things the same. That said, Stegman is such a nasty character that when Norris does eventually put his foot down and not play by the rules anymore it does feel like a punch-the-air moment and Perry King totally sells it as a man who will not be pushed any more by a devious young punk with anger issues. And when that final bloody showdown comes the film’s message is in no doubt as Norris becomes the thing he hates the most in order to survive.

Weighing in with some solid extras, including an audio commentary from Mark L. Lester, a very interesting career retrospective of Perry King, interviews with Mark L. Lester, composer Lalo Schifrin and various cast members plus a fun interview with the always entertaining Tom Holland (Fright Night/Child’s Play), who wrote the story, and a booklet featuring an essay on punk culture and 1980s sci-fi by Scott Harrison, this limited edition package is a definite must-have for collectors and anyone looking for an ‘80s exploitation revenge movie that isn’t one of the usual Charles Bronson vehicles or something so crazy it goes off into camp territory (that would come later), and for a film that revels in its own grittiness Class of 1984 really is highly enjoyable, very rewatchable and probably the best release to have come out under the Black Label banner so far.