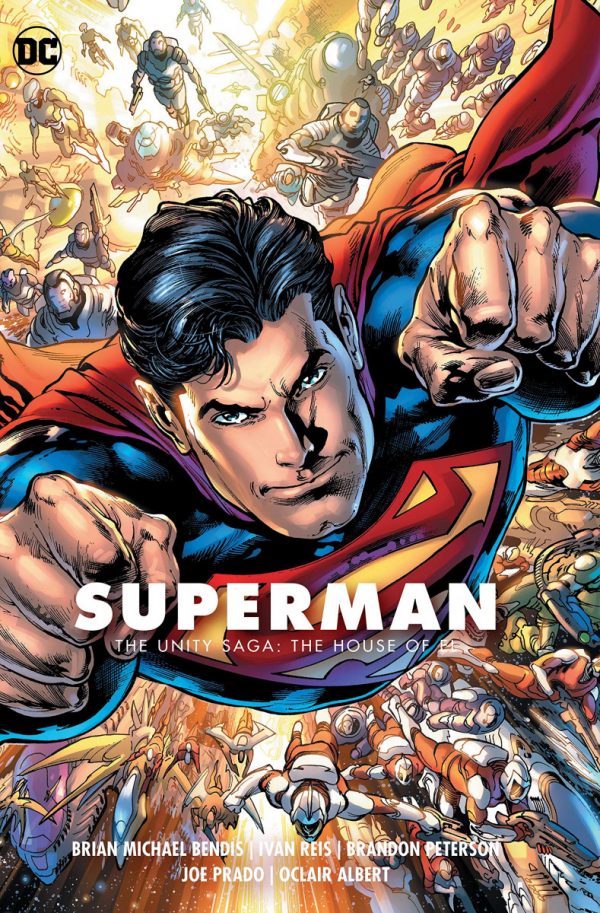 In the second volume to Brian Michael Bendis’ run on Superman, The Unity Saga: The House of El, some of the questions surrounding Krypton’s destruction by the mercenary Rogol Zaar are explored as Superman and his son Jon have a very unexpected reunion which is made more surprising by the fact Jon has aged seven years in the few weeks since he went away with Superman’s father, Jor-El. Bendis writes a interesting tale, though one that is not fully clear with a few plot points while also lacking its full potential.

One of the biggest complaints about Bendis’ Superman tales, both in this title and Action Comics, was the lack of the Kent family dynamic after Bendis separated Clark, Lois and Jon in the Man of Steel miniseries with Lois and Jon travelling across the galaxy with Jor-El. Lois returned fairly quickly in Action Comics – The Invisible Mafia, but Jon was nowhere to be seen until the final page of Phantom Earth, revealing an advanced age up from his 11-year-old self to an 18-year-old young adult in just the few weeks he’d been away. Bendis wastes little time diving into this new development as Jon recounts what happened over the course of his journey and the terrible events he went through, but Jon’s return doesn’t hit the potential Bendis aims for. Rather, it just seems like a big missed opportunity and drama for the sake of drama for Superman and Lois to have not only missed out on so much of Jon’s youth, but to also learn he was basically tortured for years in an alternate universe. It makes Lois’ previous assertions over Jon and Jor-El’s capabilities, as well as her own decision to leave the journey fairly soon after she left, seem incredibly shortsighted.

Despite the age difference and various trauma he’s gone through, Jon seems like himself and Bendis does a good enough job capturing his voice. The humour he injects into parts of the story is mostly good and fits with the previous iteration of the character, though Jon himself is not given much of an arc in the book. Bendis doesn’t delve too much into the how Jon’s time away has effected him, more than likely saving it for a future story or the new Legion of Super-Heroes he is writing, of which Jon will now be a team member. As it is, though, Bendis does a good job writing the Kent family, particularly Superman and Lois’ shock and sorrow over what’s happened to Jon. Their reactions are pretty understandable and Bendis conveys their emotions well with their desire to hide their true feelings from Jon. It just makes it more of a shame when the Kent family will once again be split up.

As this is seemingly the end of Bendis’ opening act to his Superman story, some loose ends are tied up while he plants seeds for the next arc in ‘The Unity Saga’. Superman’s battle with Rogol Zaar comes to a head in this story and, for the time being, places Zaar off the board as he and others are brought to justice over their role in Krypton’s destruction. However, a few important beats are either missing or simply glossed over as this is apparently only half the story with the rest playing out in the pages of Supergirl. While Superman tries to fight Zaar and the allies he’s collected, Supergirl apparently goes after the people who gave Zaar the go-ahead to destroy Superman’s home planet. There is also a reveal concerning Zaar’s true origin, but neither of these facts are actually explained in this book, making the final couple chapters a bit confusing. On one hand, it allows Superman and Supergirl to operate on their own stories without a huge need to pick the other up, but on the other hand both books miss out on some essential story beats that compliment the other and emphasizes the consequences of Zaar’s actions and Jor-El’s return.

The art throughout the book is pretty good with Ivan Reis and Brandon Peterson sharing art duties. Both their styles are fairly similar so it’s not a drastic shock when the art changes to the other’s pages. Their illustrations are clear and display a lot of great character work that convey the emotions of the Kent family through their body language and facial expressions in detailed sequences. Reis in particular shows the power of Superman’s presence whether he’s just speaking to others or engaged in a fight. The action scenes are also done really well with most of the fighting presented in an manner that is easy to follow. The inks from Joe Prado and Oclair Albert accentuate Reis’ artwork while Peterson’s own inks work well with his imagery. Alex Sinclair provides a large variety of colours as Jon relates his journey through the galaxy with Jor-El and captures the chaos of the in-space fights between Superman, Zaar and Zod. Very little detail is lost with such a large group of characters and actions. Even though the elements of the story aren’t quite there, the artwork alone is enough to make the book a fun read.

Bendis’ Superman Vol 2 – The Unity Saga: The House of El does a fairly good job of showcasing the love and respect in the Kent family, though some of the character development with Jon could have been better explored as well as certain story elements which leaves a little too much open or confusing unless you’ve read other titles. The artwork from Reis, Peterson, Sinclair and others are pretty detailed though and lifts some of the weaker parts in the story up. This first act ends on an intriguing note, though it’s a shame the Kent family won’t be together much longer as they have so much potential together, especially with the changes to Jon’s character Bendis has made.