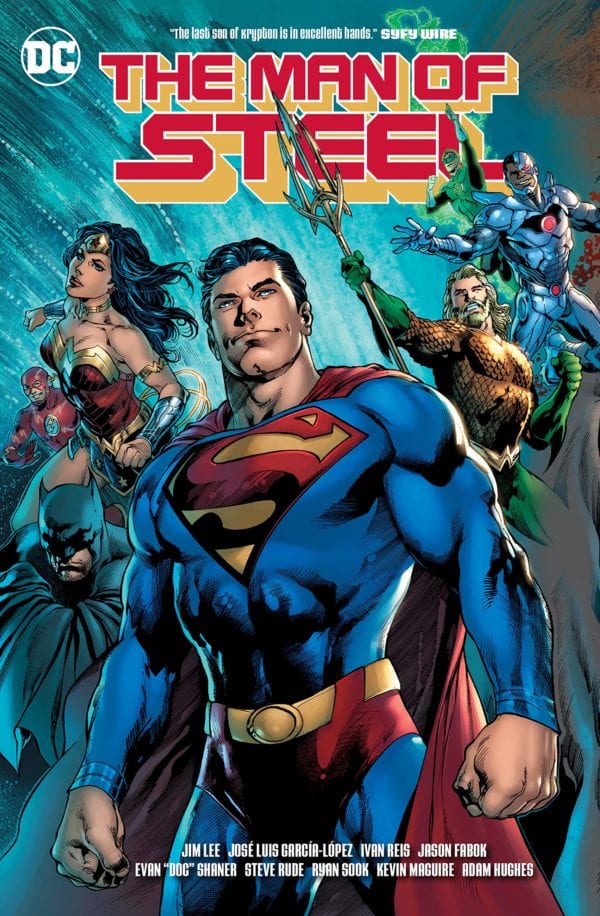 One of DC’s biggest coups of the last year was gaining superstar and fan-favourite writer Brian Michael Bendis to work on their oldest and most reverent superhero, Superman. Bendis is taking over on both Superman and Action Comics, but before his tenure on those flagship titles began, he crafted the miniseries The Man of Steel, a story set to create the backdrop of his main narrative by introducing a new villain to Superman’s mythology with mysterious ties to Krypton’s destruction. Bendis presents an intriguing introduction to his stewardship of Superman that captures the spirit of the hero. Some issues hold it back from being a great miniseries, but it is still a fairly solid exciting first chapter for Bendis’ Superman debut.

Bendis captures Superman’s characteristics pretty well throughout the story. He’s heroic and charming, even when he’s going through some personal turmoil as both Clark Kent and Superman, that he’s keeping secret from the rest of his friends and colleagues. From the way Superman speaks to fellow citizens or Batman rogues hiding out in his city, Bendis captures the spirit of Superman very well by balancing his levity and seriousness. At times he’s a little more dour than usual since Lois and Jon aren’t around, and that dourness only increases as the series continues with even more personal losses, but he still remains the Superman fans know and love. Bendis even knows how to utilize Superman’s characteristics during a fight, showing he’s got an intellect of his own when it comes to fighting and how best to use his powers in such a crowded city like Metropolis. His take on the Man of Steel is really the best aspect of the book.

Bendis also shows a good handle for most of Superman’s supporting characters. Jimmy Olsen, Perry White and Supergirl are written well and, though they don’t appear too much, Lois and Jon feel very much in character with Clark and Lois’ chemistry on point. At times, though, Bendis doesn’t quite capture the voices of the supporting characters. Some of Jon’s dialogue feels out of character as does some members of the Justice League. Bendis writes a good Batman, but his Flash and Cyborg have some interesting expressions in their dialogue that neither land well with their jokes or sounds like them.

While Bendis’ take on Superman and most of the supporting characters are good, the one weak point of the story is the central villain. Rogol Zaar is a new face to the Superman mythos and one with an alleged connection to Krypton’s past. He is presented as a fierce warrior and zealot who views himself as fighting a noble cause even if the universe’s most powerful figures disagree with him. The problem is that we only get to know Zaar on a very surface level with his actions and behaviour. Beyond that, there’s nothing that separates him from many of Superman’s other rogues than being just another big bad who can match him physically. The potential Bendis presents him with in the first chapter fizzles out and by the time story concludes, there’s nothing more to him as Bendis leaves the mystery of his past hanging open. Part of that is because he’s planting the crumbs for his ongoing Superman and Action Comics stories, but there’s just not enough to Zaar to make the intrigue really attention grabbing.

Another issue is the book’s pacing. It’s a much better experience reading it in a collected format rather than on a week-to-week basis as the series was in its original publication, but there are still some issues with the story’s flow. In every chapter the story pauses for a couple pages to flash back to what happened to Lois and Jon until the full event is revealed in the finale. The way it is presented is a little repetitive as the first half of this event is played over and over again with only a couple more lines of dialogue revealed each time. It’s not until halfway through or the penultimate chapter that it really starts to become interesting and lose its repetitive feeling. Man of Steel doesn’t really start to pick up until its third and fourth chapters, yet it still relies on the mysteries of Zaar’s claims as well as the whereabouts of Superman’s family. The fact that one of those threads is left open and the other took away the most interesting and fresh approach to the character in years, after a highly successful run from the title’s previous creators too, makes these plot points a little frustrating.

The art is pretty good throughout the series with a rotating crew of some of DC’s top talent. Ivan Reis, Jason Fabok, Jim Lee, Doc Shaner, Jose Luis Garcia-Lopez, Steven Rude, Ryan Sook, Adam Hughes and Kevin Maguire contribute the book’s pencils while Hughes and Alex Sinclair provide the colours. Each artist does well with their work and present Superman in some pretty great imagery with Lee and Reis being obvious highlights. Maguire puts on a nice display of action in his chapter with some very fluid movements in and between the panels, including some noticeable details in the background, that sells both how skilled Superman is with his strength and dangerous Zaar is as a new enemy. Hughes also presents easy to follow action with some vibrant colours that blend lights and darks, though he loses some of the detail later in the chapter on the character’s faces. Other than that instance, though, the art from everyone is pretty great and none of their unique styles clash in a major way.

The Man of Steel is a good jumping on point for new reader’s of DC’s biggest hero. Bendis captures the essence of Superman and does well with his characterization, even if he is a little more dour due to the personal struggles he’s going through. The art from the team is pretty good for the most part with only a couple hiccups. While the story is largely set up for Bendis’ ongoing series, it does make a fairly good introduction to Rogol Zaar, though he could have been given more characterization to separate him from other Superman villains. Nevertheless, Bendis delivers on some of the book’s potential while setting some interesting pieces in place. While some of the execution doesn’t quite land, fans should be intrigued with the new direction Superman is heading in.