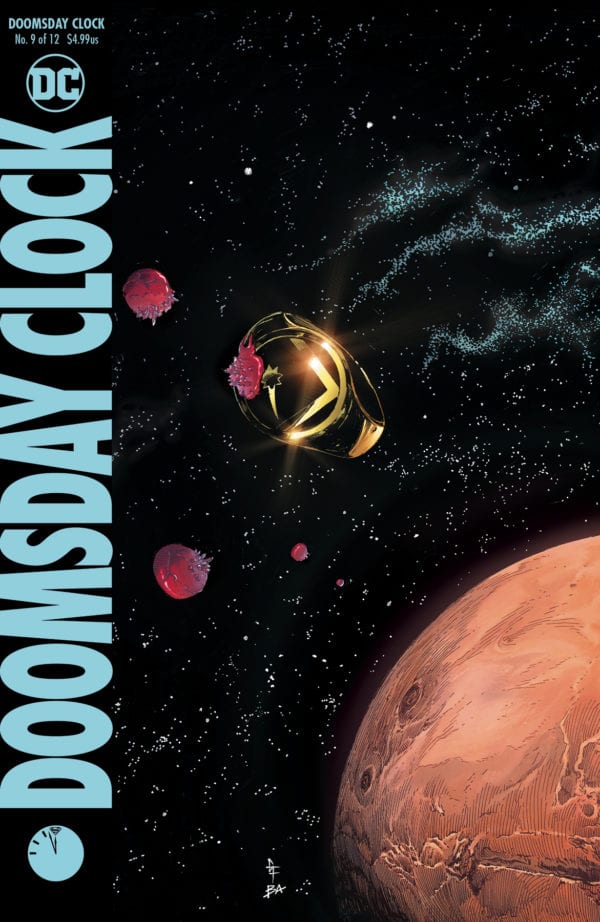 After several delays, Doomsday Clock #9 is finally here and it was well worth the wait. The issue was basically a fans dream of settling what were once imaginary debates of who could win in a fight: Dr. Manhattan or the entire Justice League? Geoff Johns further captures the essence of Manhattan’s character while Gary Frank knocks it out of the park with his visuals. He provides some of the best work in the series so far with how much is going on from panel to panel. Overall, the issue provided another stand-out sequence with the battle on Mars while also raising some intriguing questions as we edge closer to the finale.

Picking up shortly after Doomsday Clock #8‘s conclusion with Firestorm apparently setting off an explosion in Moscow, Johns doesn’t waste very much time kicking things into high gear as several Justice League members travel to Mars to confront the explosions mysterious energy signature. There are some deep pulls here as John utilizes very familiar faces like Martian Manhunter, Supergirl and Steel, members of the Bat-family to the Doom Patrol, Metal Men and Justice League Dark. It’s a nice collection of the wide array of DC’s heroes and while some may only have a brief moment or two to shine, Johns makes some great use out of them. Guy Gardner in particular stands out as he tries taking Manhattan on all by himself while Manhattan’s reaction to the various magic wielders like Constantine and Zatanna is humorous. Firestorm, however, ends up playing a fairly significant role given Manhattan’s possible frame-up of him and is shown something which gives a lot of credence to the Supermen Theory Johns has been building up throughout the story. While it’s a bit of a bummer to see Superman sidelined again, the use of the League’s B and C-listers is nicely done.

Johns also does well with capturing Manhattan’s voice and habit of seeing events in a non-linear fashion. Manhattan sounds very much like himself from the original Watchmen as he effortlessly shifts back and forth between perspectives, but Johns doesn’t overdo that aspect of the character either. For much of the issue, he’s very much in the moment as he examines the League and their capabilities and shows just how outmatched they all really are. Johns also captures Manhattan’s cold dispassion as he speaks with and faces down the Justice League, viewing them more as amusing curiosities than true threats. It’s interesting and funny to see such a powerful character like him examine something he doesn’t fully understand like a Green Lantern ring or the essence of magic and be intrigued at something new to learn about, recalling one of his final moments from Watchmen at being excited by not knowing what happens next. Johns utilizes Manhattan very well here.

While the battle on Mars is the biggest takeaway of the issue, the story makes some big moves forward as Johns begins tying everything together. It would have been easy to focus entirely on the battle’s spectacle, but the plot is still given just as much significance as the action. From the revelation that Firestorm’s role in the Supermen Theory may actually be true to Lex Luthor’s own investigation into the Justice Society, Doomsday Clock #9 marks another turning point for the series. One of the more intriguing developments is the renewed significance of the Justice Society’s absence as Manhattan’s narration implies his tiny act of preventing Alan Scott becoming a Green Lantern is what has caused the end of the world. We’re still waiting for the reasons as to why Manhattan has interfered so much in the DC universe, especially in Superman’s life, but why he has placed so much importance on the Justice Society is one of the bigger questions of the series and should have a lot of Society fans happy that Johns is giving their place in history so much reverence. Hopefully we’ll see more of the Society before the end.

As frustrating as the delays can be sometimes, it cannot be denied that they are worth it when we get art as great as Frank’s. From the number of characters he has to draw, whether they are in the battle or not, his detail on each one is excellent. Frank’s facial expressions for Manhattan, J’onn, Guy and Lois Lane are some clear standouts. He captures Watchmen‘s nine-panel grid layout really well and uses it to showcase several of the heroes in their own moments. He makes every image stand on its own thanks to the amount of detail he puts in. Frank’s pencils are helped even further by Brad Anderson’s colours. Anderson provides some very dynamic colours as the Justice League is set nicely against the red of Mars, as does Manhattan taking on the various powers they utilize. Even the darkened scenes between Lex and Lois are great as Frank and Anderson play with the shadows to further emphasize their emotions and body language.

Doomsday Clock #9 is one of the most impressive issues of the story thanks to Johns’ characterization of Manhattan and Frank and Anderson’s artwork. The battle between Manhattan and the League will probably go down as one of the most memorable events in comics this year, but the movement in the story places some compelling pieces down in the puzzle. The fact that the issue concludes with Black Adam getting in on the action in a major way is exciting and while it does raise the question if Johns is biting off more than he can chew given the vast amount of characters in the story with only three issues left, there’s little doubt he can’t handle it. Hopefully Superman will play a larger role in the final issues, but for now Doomsday Clock #9 was a great addition to the story thanks to Johns, Frank and Anderson.