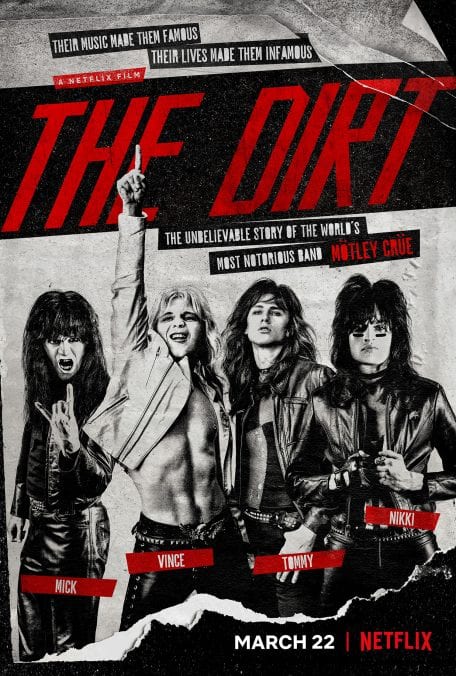 The story of how Mötley Crüe came to be one of the most notorious rock ‘n roll groups in history. 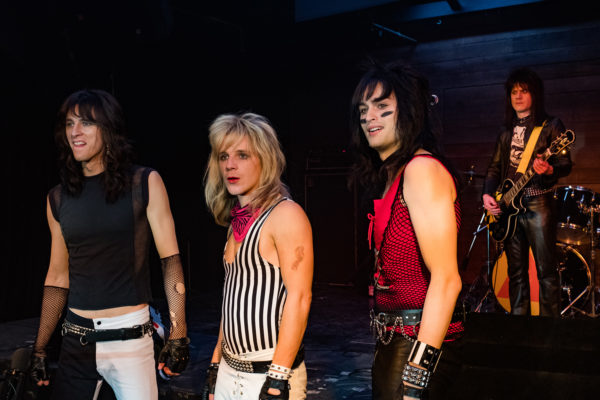 It’s all-too-inevitable that, in the wake of Bohemian Rhapsody‘s commercial and awards success – to say nothing of its more tepid critical response – we’re going to see a glut of dubiously “necessary” musical biopics over the coming years.

And while the allure of a probing, gritty examination of the forces that make a band tick speaks for itself, it’s easy to fear the Queen biopic’s successful “Wikipedia-page-as-movie” formula being widely adopted by both studios and bands keen to sell their stories, resulting in homogenised, blandly efficient filmmaking at best.

To that end it’s somewhat surprising to learn that Mötley Crüe biopic The Dirt is a 12-years-in-the-making passion project for director Jeff Tremaine (Jackass), a fact not remotely implied by its rather workmanlike adherence to the genre schematic. It is almost solely on the basis of the film’s top-notch cast and its overall vivacious energy that this is just good enough.

A whistle-stop tour through the origins, the highs and the lows of the band’s 35-year tenure, The Dirt has to cram a lot of drama into its 108-minute run-time, inexorably aided by some cutesy fourth wall-breaking moments which pacily nudge the narrative along, and an unfussed, seat-of-your-pants editing style that, if nothing else, feels totally in-step with the band’s own roughhouse demeanour. 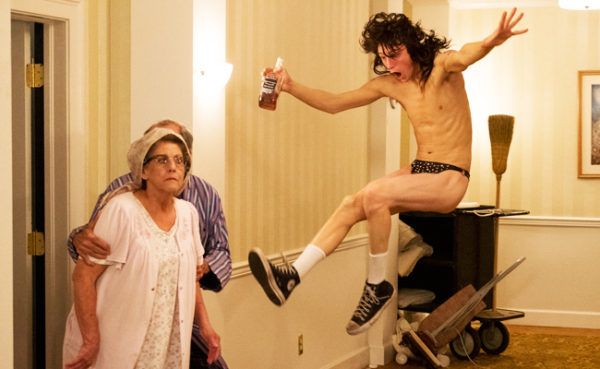 And that is really this biopic’s true success; even when it’s racing through the usual drug addiction, family melodrama and band dissension cliches, it captures just enough of the rock outfit’s reckless, sloppy tenor to feel like a true(ish) representation.

This is a testament primarily to the central quartet, who despite the familiar material manage to graduate beyond pantomime impersonations – especially Daniel Webber as front-man Vince Neil and Colson “Machine Gun Kelly” Baker as drummer Tommy Lee. But that’s not to forget fine work from David Costabile as the band’s manager Doc McGhee, and a frighteningly spot-on cameo from Tony Cavalero as Ozzy Osbourne (in surely the film’s most gross-funny scene).

The real challenge of a Mötley Crüe movie, however, is in deciding how to approach the band’s notorious moral dubiousness, and given director Tremaine’s status as a co-creator of Jackass, it’s probably reasonable to expect the band’s more problematic behaviour to be brushed entirely under the carpet.

The Dirt instead decides to perform a tap dance on a tightrope, essentially, by at once drawing raucous attention to the band’s alcohol and narcotic excess, not to mention their nightly sojourns to strip clubs, but ultimately confessing the dangers of such a lifestyle. It’s Ozzy Osbourne of all people, hilariously enough, who practically stops the film dead to warn the band of this, even if they naturally don’t take much notice.

Tremaine’s film makes great pains to document substance addiction and the soulless potential of the touring band experience – and in some of its best and quietest moments, the movie does a great job depicting the dull grind behind a charmed musician’s life. The constant travel and the hotel rooms promote a mental burnout, whereby only the hardiest mind can avoid the temptation of sex, drugs and booze. 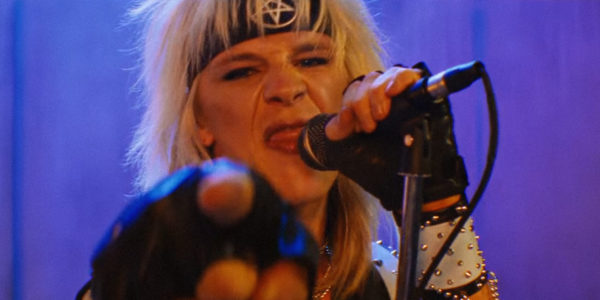 Things get a little muddier on the sex front, though, especially given the band’s well-noted controversies with their treatment of women. The film somewhat proudly has a character tell the audience, “Never leave your girlfriend with Mötley Crüe, because they will f*** her,” a claim that might be amusing had Nikki Sixx not included a sexual assault story in the book on which this movie is based. A story he unsurprisingly recanted on the eve of the film’s release, of course.

But it would’ve been foolish to ever expect a band-endorsed biopic to get that far down in the weeds, and it’s an aspect of their history that will likely be shrugged off by those who this film is most eagerly appealing to. On the balance of perspectives, Tremaine does a reasonable job depicting the band’s many personal failings, even if some might understandably take umbrage with a tone that sometimes veers a little too close to “let boys be boys.”

More often than not, though, the focus is trained on a group of fast-living young men who, despite their trials and tribulations, formed one of the most iconic and best-loved rock bands of all time, warts and all. There’s just enough emotional nourishment here to make The Dirt feel like more than a hollow PR exercise – a sequence involving Neil’s terminally ill daughter is genuinely, unexpectedly heart-wrenching – even if you couldn’t be faulted for wishing it was more comprehensive and a little less doting.

A thoroughly standard issue musical biopic, albeit one which captures – and doesn’t fully romanticise – the band’s dangerous, anarchic spirit.