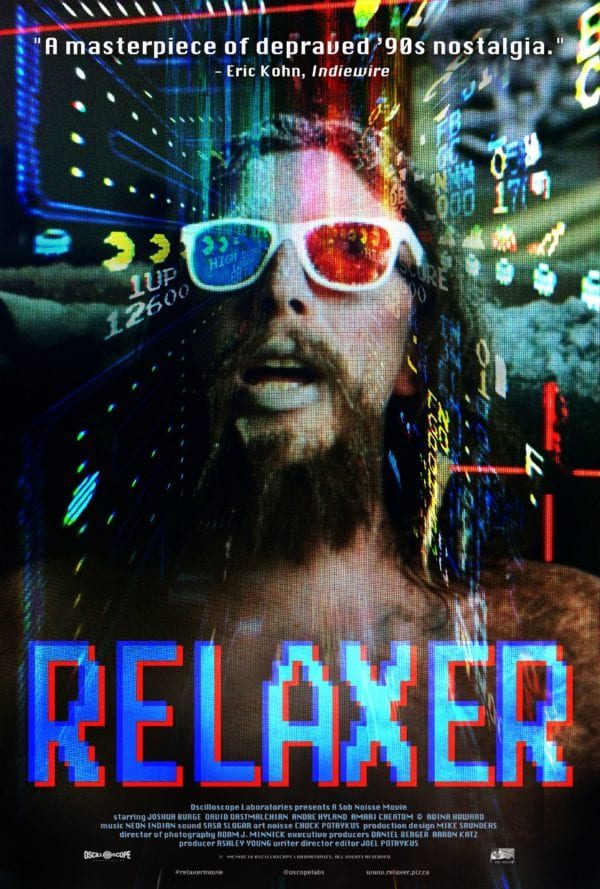 With the impending Y2K apocalypse fast approaching, Abbie is faced with the ultimate challenge – the unbeatable level 256 on Pac-Man – and he can’t get off the couch until he conquers it. A survival story set in a living room.

Slackerdom is performance art wired to the reving engine of Americana culture. As children, we dream of wearing controller joysticks smooth while munching on processed and bagged snack foods. Slugging back carbonated drinks dyed radioactive colors. As adults, can we argue those same things don’t nag away during work hours, or overtime shifts, or weekends spent on responsible duties? Enter Joel Potrykus’ Relaxer, a single-setting narrative that permits one motivationless character the right to “chill out” forever, but at what cost? Dignity? Hygiene? Self-preservation?

Potrykus relates gamer culture to the spectacle of human fantasy, as cheat codes and glitches represent parallels to our desire for lives less complicated. Alternate realities where we can Up-Down-A-Z-Down-Down our worries, debts – anything – away. Crack a Jolt and pop in some pizza rolls, things are about to get – very literally – nasty.

Joshua Burge stars as “Abbie,” a shirtless nobody who’s amid a milk chugging challenge imposed by brother Cam (David Dastmalchian). After nature takes its regurgitative course, Abbie agrees to one final trial before his survivalist sibling departs. Inspired by an issue of Nintendo Power, Cam instructs Abbie he must defeat Pac-Man level 256 and win the $100,000 prize offered by cover model Billy Mitchell. Will this be the first challenge Abbie conquers? With Y2K still a few months away, time is on his side – but that’s the only thing. 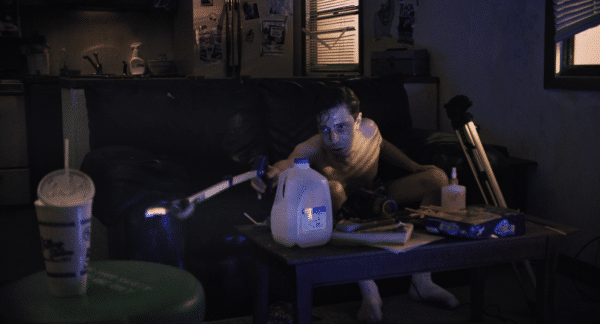 Relaxer revels in repugnancy and misery in a way that’s intended to churn your stomach. Abbie’s never shown showering, defecating, or moving much more than an inch as he physically incapacitates himself for hours then days then months. Urine, milk vomit, and cherry cola cake his skin, which – out of fits of dehydration – he licks off his fingers for the smallest dosage of sustenance (two bologna sandwiches with holes in them only get you so far). We gaze on as Abbie does anything *but* guide Pac-Man past Blinky and Clyde towards another bonus munch. Locked in, as Potrykus exploits couch potato culture as a means of gross-out comedic revelation.

Metaphors are so on the nose you can smell the rotten, piss-soaked warm milk stench wafting off Abbie’s skin. When verbally belittled, Abbie puts on red-and-blue 3D shaded sunglasses (with personal meaning) and refuses to stand (up for himself). As Abbie achieves new milestones while glued to the ass-grove in his sofa, Pac-Man sound effects signal his “next level.” Nostalgia blends with revulsion and mixes in moral starvation, all to say time cannot be eternally spent uncovering every glitch in Tony Hawk’s Pro Skater. Also, Abbie may be telepathic? And he keeps a knife tucked under his seat cushion?

Characters waltz in and out of Abbie’s apartment noting the smell – dreadlocked media store clerk Dallas (Andre Hyland), a bug bomb crew, Arin “Bechdel” (Adina Howard) – adding conversational tone that reveals backstory information. Banter exposes Abbie’s past as he yearns for California sunshine so he can reunite with his sexually abusive father. Cam continually knocks Abbie into the “mud,” forcing unwinnable challenges – everyone knows Pac-Man level 256 leads to a binary cascade that corrupts the game, even on N64 – as Abbie continues to endure masochistic derailment. Relaxer bruises its subject beyond repair – wounds visible, festering as Abbie *insists* that he’s “just relaxing.” A victim of his own imprisonment, strapped to leather by someone else’s words (and, after time, undefinable stickiness). 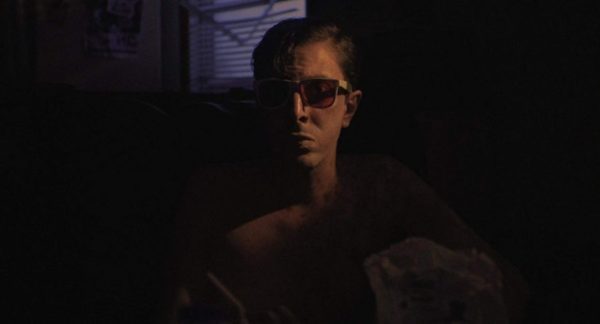 All this to say there’s *plenty* going on throughout Relaxer despite confinement – a canister of Army property in plain sight, unanswered questions, Abbie’s “inventive” methods that keep his tush planted – all of which Potrykus captures through steady long takes. The rural American filmmaker continues to evolve from Buzzard to The Alchemist Cookbook and now chugging Kool-Aid, but does lensed unease translate into sustainable slothishness? Humor is derived from Dallas’ “Show Me The Money!” impression, or Abbie’s connection to a dead crow, or being covered in raw sewage. Conversations of the foolish – mostly as Abbie attempts to crack 256’s code – or desires for Chuck E. Cheese pizza. Dastmalchian enters and exits as an aggro-bro who can be seen passing the time with pushups, filling baby bottles with milk, and pummeling Abbie with each word.

As Abbie punishes himself, so will some viewers. “Divisive” is the word here, and while this critic stood for Buzzard and The Alchemist Cookbook, Potrykus’ latest – stylized and colorful in terms of tubular glows – uncharacteristically grows tiresome as humanity collapses.

Relaxer is an achingly absurdist gross-out picture that canonically fits within Joel Potrykus’ mainland method of creation, but will not play to audiences equally. Oddities are often “my shit,” but I found myself underwhelmed by Abbie’s lazy purgatory, nor engaged as his quest for “257” beats around proverbial bushes. Joshua Burge owns mediocrity – no argument – only to statuesquely meander like an unending Mario 64 level with no objective. Oh, and Mario can’t leave Princess Peach’s couch? Some of you will love Relaxer, and find grand meaning in Abbie’s epiphany – master this film’s pattern and you’ll be rewarded.