The end has come for Star Wars Resistance’s first season as Kaz, Yeager and their team make a desperate play to save the Colossus and rid themselves of the First Order while trying to rescue Tam from their clutches. Problem with that last part, though, is Tam may not be quite so willing to join Kaz and Yeager again. ‘No Escape: Part Two’ delivered an exciting and tense finale that capitalized on its character development for several characters while setting the stage for its second season in some very interesting ways. 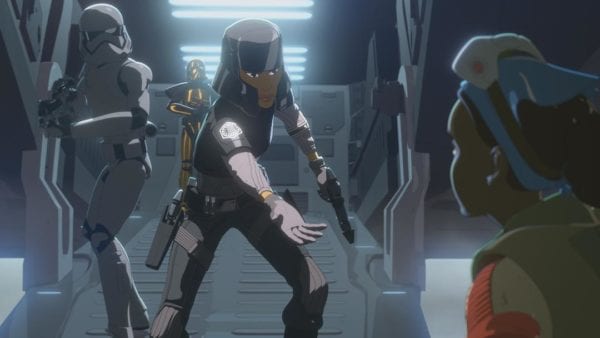 Unlike the previous episode, ‘No Escape: Part Two’ was a nicely balanced episode with its seriousness and comedy. It focused much more on the former element than the latter is Kaz had to quickly deal with his emotions at watching his home planet be destroyed by Starkiller while coming up with a plan to save the Colossus. It really allowed the tension throughout the story to rise organically and out the pressure on Kaz and Yeager to rescue Tam from the First Order’s clutches, but it really came together in the end where so many elements of Resistance‘s first season came back, such as the return of Synara, Aunt Z and the Ace pilots working together against the TIE Fighters. It made for a pretty exciting finale as all the various pieces came together.

The action was only matched by the emotional tension the characters felt. Unfortunately, Kaz’s pain at the loss of his homeworld had to be pushed to the side for the sake of the mission, but it was pretty clear how devastated he was at the First Order’s attack. The emotional conflict was really centred on Tam’s feelings of betrayal, especially in regards to her relationship with Yeager. Both Suzie McGrath and Scott Lawrence gave some pretty great performances with McGrath being the clear standout. The pain and anger she unleashed at Kaz and Yeager for all their lies and treatment of her, despite their good intentions, felt authentic thanks to McGrath’s performance. Tam has really gone through quite an arc throughout the season and it really paid off, albeit tragically, in her final moments. 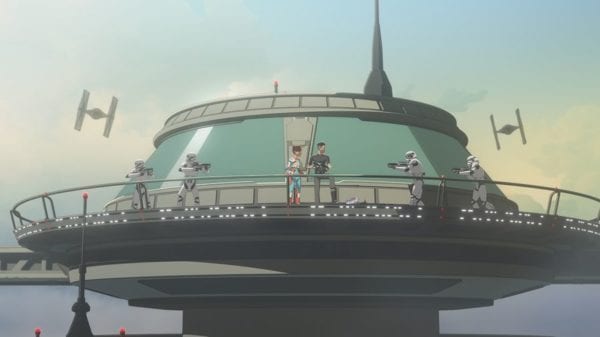 The moment where she chose Agent Tierny over Yeager was not a particularly surprising one given the things she’s said and has been told over the last several episodes, but that didn’t make the impact of her choice any less. It was a devastating loss for Kaz and Yeager, but ‘No Escape’ did a great job of making you empathize with Tam while also making it clear that, even as she made her choice, she was still conflicted in leaving Yeager. It was quite an emotionally powerful moment for all the main characters that was not only well acted, but well animated as the confusion and pain on Tam and Yeager’s faces was very well detailed.

‘No Escape: Part Two’ also boasted some of the season’s best action yet. Between the showdown on the landing pad and the aerial battle as the Colossus took off, the action was very entertaining and tense. Seeing Yeager and Kaz finally fly together was great as they both worked very well together in the sky. Even though Major Vonreg didn’t have quite as much of a role throughout the season, he and Kaz did have a bit of a rivalry in his few appearances and it was satisfying to see Kaz finally defeat him once and for all. Another nice touch to the finale was the Aces joining Kaz and Yeager in battle as well as Synara coming in with the pirates to even the score after the First Order double-crossed them several episodes ago. As said, many elements of the season came together very well. 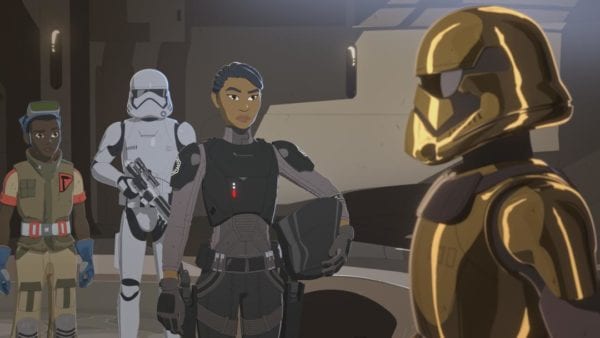 While the finale tied up a lot of the season’s loose ends and character development, it concluded on some pretty intriguing cliffhangers for its second season. Not only has Tam joined the First Order, but Kaz, Yeager and everyone on board the Colossus are not actually heading to the Resistance headquarters at D’Qar, but somewhere else in the galaxy since Neeku couldn’t input the coordinates in time. Its an interesting set-up and makes one wonder how it will tie into the events of The Last Jedi (since that sequel will take place pretty much immediately after the finale) or Episode IX. It will also be interesting to see if this development crosses over with another of Dave Filoni’s Star Wars series, like if Kaz and Yeager meet, say, a wandering Jedi and and Mandalorian in search of their lost friend and Imperial Admiral in the outskirts of the galaxy.

‘No Escape: Part Two’ was a well done conclusion to Resistance‘s inaugural season that was exciting, tense and emotional. It successfully built off everything that came before it and delivered a more than satisfying end while setting up a very different second season. Fans of the series will be quite pleased with how it wraps up.