If there is one name in comics that stand with legends like Lee, Kane, Finger, Ditko and others, it is Denny O’Neil. With a career spanning nearly 50 years in comics, O’Neil has made some pretty remarkable achievements to the medium in his time as a writer and editor for both DC and Marvel. The impact he made on superheroes like Batman and Green Arrow are some of his most well known as he helped bring Batman back to his darker roots while reshaping Green Arrow’s character for a new generation. His influence is still felt to this day through the comics, animation, television and even films as several elements of his work have been adapted in various ways. It cannot be understated just how important O’Neil’s contributions have been. The legendary comic writer-editor will be appearing at the Toronto Comic-Con at the Metro Convention Center this weekend, appearing on the days of March 16 and 17. We got the chance to chat with O’Neil prior to the convention about his long career and what it was like to revamp Batman, Green Arrow and others at a time when the popularity of comics seemed to be waning. Among other topics were Batman’s seminal 80th anniversary, including the upcoming Detective Comics #1000 for which O’Neil has written a sequel to his famous story ‘There Is No Hope in Crime Alley’, his work over at Marvel and an upcoming collection on The Joker that O’Neil has also contributed to. Check out the interview below…

Ricky Church: This year marks a big one for Batman as its his 80th anniversary. What do you think it is that draws audiences to Batman?

Denny O’Neil: Well, part of it is the iconography. The first thing that was submitted to an editor as a way to capitalize on Superman’s success looked like Superman with a domino mask and bright colours. It was the genius of Bill Finger to come up with that shape. I don’t think I’ve ever met an artist who didn’t want to draw Batman once. They want to do their version of that silhouette even if they don’t want to do any stories. There’s also the fact that, as with Superman, there’s a tragedy at the center of his character. He is human and that’s what attracted me as a writer. I could get him into trouble, I could come up with death traps. It wasn’t like Superman where you had to spend dozens of words explaining why he doesn’t do what we saw him do last month. Superman is derived from god mythology and Batman is derived from hero mythology. I don’t know why the original Batman super-character that Kane originally invented was not accepted. One of the editors rejected it and instead of just firing everybody, which is probably what they do now, they hooked him up with a writer about his age. I knew Bill Finger a little bit. I spent an evening with him and in that long evening he told me he loved The Shadow and the general idea of a man who you can never really be sure is there or not. 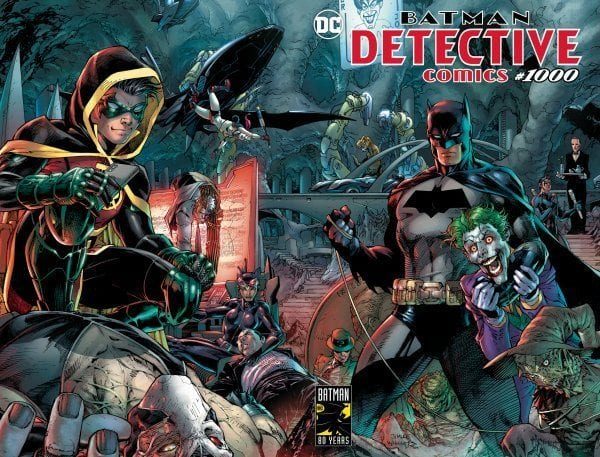 RC: Another milestone Batman will reach in just a couple weeks is the thousandth issue of Detective Comics. As a former writer and editor for the Dark Knight, what does Detective Comics #1000 mean for you?

DO: I’ve done a textpiece for it and the next thing I will do for DC is a textpiece for a Joker collection. The first thing you can say about Detective #1000 is nothing has ever lasted that long before aside from Action Comics. Nothing that is a publication. I think Batman and comics in general have had a influence on pop culture because they have lasted so long. I mean, people will use superheroes as advertising icons! Its become an archetype for us and is now respectable academically. I have on my table here an academic publication about comic books. When I teach, I teach at New York University which is certainly respectable. Almost every major university and major library has a comic book section now. They are being recognized as something that has seeped into the national awareness.

RC: Very cool about the upcoming stories! Now one of the big things you did during your time writing on Batman in the 1970’s is bringing him back to his darker roots as Bob Kane and Bill Finger originally presented him as. What kind of difficulties did you face in shifting the public perception of Batman back to this darker figure after such a long, campy period in the comics, particularly with the success of the Adam West show?

DO: The job I was given by Julie Schwartz was to change it so that wasn’t much of a problem. What happened was the TV show was an enormous success for the first year, it was on twice a week, it had a pretty reasonable success the second year and it bombed the third year. The comics had tried in a very off-hand way to follow the lead of the TV show. It is not universally true that when something becomes a movie or TV show it’s comic book sales go up, but it was true in that instance. I was living in Greenwich Village and I would go into a bar that was frequented by writers, professors, NYU academics and they were all riveted by Batman on the back bar, but that didn’t last long.

The people in the big offices were, I think, considering cancelling Detective or changing the format, but they were going to continue publishing Batman so Julie gave me the assignment, saying “We’re not going to do what we’ve been doing, you do something.” For years at lecture platforms and classrooms I’ve said this is what Neal Adams and I did. We took Batman back to his origin, May 1939. This obsessive guy, this creature of the night. It was the genius of Bill Finger that he figured out how to do that character for comics. You need an icon if you’re going to do comics and he came up with the perfect one. We took it back to its origins and then when I took over editing Batman I did the homework and felt that isn’t what we did. Batman was a father figure with loving issues or if not a father, the best big brother anybody ever had. Our stories were uneven as sometimes attention was paid to his tragic beginnings, sometimes it was just a superhero story about a guy in a funny suit. But I am told by historians that that version of the character is one of many that has been prevalent since. 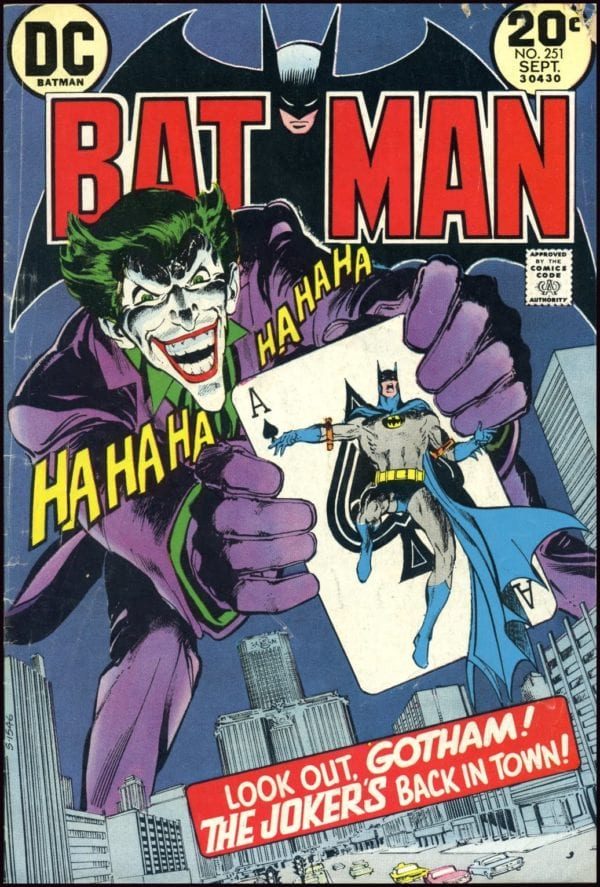 RC: Apart from revitalizing Batman, you also did the same thing for The Joker, particularly with ‘The Joker’s Five-Way Revenge’ where you brought him away from the harmless, goofy prankster back to the homicidal maniac. Did you find it difficult to transition him back to his original interpretation or was it simple as well?

DO: There wasn’t much of a transition. Actually the job I have to do this week is to write a textpeice about The Joker and so far I have not solved the problems that textpiece presents. I normally do this part of the job by taking a long walk, I live pretty close to a nice lake. Can’t do that now though because it’s colder than hell out there. I will do my best, though, to keep my word. If you’re a professional that’s what you do. If you say Thursday, you don’t make it Friday. Sometimes that’s not possible, but I think it’s always possible to at least let that editor know you’re having that kind of problem. The biggest problem comic book editors have is people who don’t do what they promise to do. Julie Schwartz used to talk about having that problem back in the 40’s and the same people when they work in television they’re very prompt, but something about comics they feel like they don’t have to take it seriously. Well if its what’s feeding your family, yeah you have to take it seriously.

RC: Some of the other additions you made to Batman during your time was the creation of Ra’s al Ghul and his daughter Talia with Neal Adams. Now Ra’s has seen a fair bit of a popularity rise in the last decade or so, partially in thanks to Liam Neeson’s portrayal in Batman Begins. How do you feel knowing a villain you helped create has made such an impact on Batman in the comics, animation and live-action?

DO: Well here we’re moving into territory where Neal would give you different answers than I will, but I can speak with some authority about Ra’s because I was really, literally there at the beginning. Julie Schwartz and I decided we needed a new major villain for Batman. We had gone back to the well too often. There was The Riddler, The Penguin and The Joker and we kept using those characters so Juliu had a name he liked. Ra’s al Ghul. It means ‘Head of the Demon’ in Arabic. I don’t know where he got it. So he gave me that and my mission was to create a character. You begin with your hero. What is Batman about? He’s about logic, about double identities, about Gotham City. So you think of a villain that speaks to all those and is also smarter and tougher than the hero. Later, when Ra’s became a movie star, I was made aware of similarities between him and Fu Manchu. Now I would have sworn I created Ra’s from nothing, but journalists have pointed out the similarities. I know I didn’t read any of the Fu Manchu novels. Did I see any of the movies? Well I used to go to a lot of 42nd Street movies and not always sober so it’s possible.

But he’s the only character I can think of where we set out to create a major character. As you probably know Spider-Man was created to kill 15 pages Stan had left over from Amazing Stories. Captain Marvel, the first one, was created by a committee and the guy in charge of the committee was the guy who edited Fawcett’s movie magazines. It’s corporate think, ‘well movies are pictures and comics are pictures, obviously this guy is the man to do that’. Most of the characters from the 40s have evolved and that’s good, that’s why they’ve lasted and the other reason is Julie re-invented them in exactly the right way. Stan gets huge amounts of credit for re-inventing comics and he deserves it. Without him we wouldn’t be here. But Julie, in a different way, also re-invented comics.