When the game was initially announced back at the Xbox E3 2018 conference, a lot of people had mixed feelings about Devil May Cry 5. The announcement came out of the blue and left a lot of people wondering what exactly to expect from the latest title, since the last outing for the IP was the criminally underrated DmC: Devil May Cry by Ninja Theory.

Devil May Cry 5 is back with Capcom’s comfortable Hack and Slash gameplay, though there might be a little nod to Ninja Theory in the game. The setting reverts to the main canon and is very much a return to form.

The first thing to talk about is the game’s meaty story; there is a substantial amount of story here and it has not just been a second thought, presenting an interwoven narrative between three playable characters. The happy go lucky DMC games of yore have started with OTT action and wise remarks, and while Devil May Cry 5 has them too they are served with a massive lashing of humility. The game starts off with everyone at their lowest point and having to deal with a threat that could not just initially be dealt with in a single blow. 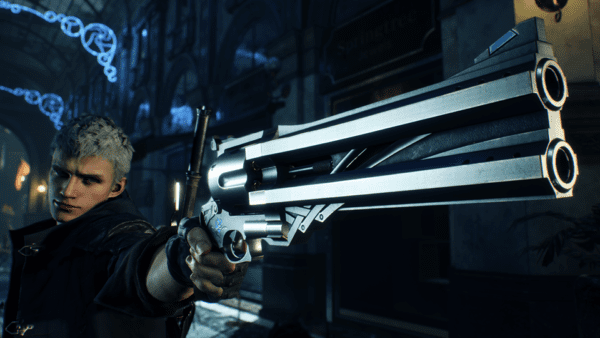 You discover the Red Grave City is under a demonic occupation with a strange tree growing from the demon world and into the human. When the prologue finishes the game move forwards a month to discover that Nero is returning to the city to get his revenge on losing his initial fight with the evil entity at the heart of the tree.

After completing the title just hours before writing this review, I was drawn into the story and had to see it through the conclusion before I could type a single word. The game is possibly one of the greatest DMC titles to date, and the story plays like a great epic where everything in the series so far has led to this point. The main title screen for the game also lets you review the history of the series to date and lets you know where all the titles stand within the canon – and yes, they did include DMC 2 and its horrific outing.

Nero and newcomer V take the reigns for the first half of the 20 chapters, then (not a real spoiler since he is on the cover) Dante emerges into the mix in the game’s latter half. Each of the characters have a unique play style which can be off putting, though some missions have branching paths which mean multiple play-throughs of the level are needed with the different characters. All characters will share a health bar, so there’s no need to upgrade them separately, while Dante and V also share a Devil Trigger meter. The abilities for each character have to be purchased separately so all new combo attacks, charge attacks and personal speed boost and double jump must come out your pocket repeatedly.  This does not cause too much of an issue though as the game can be very liberal with the dropping of Red Orbs.

Nero has the same load out and game play style since his last outing in DMC, though he now has a robotic Devil Breaker arm instead of his demonic arm. This new arm has different variations which have offensive, defensive and area effect abilities.

V is the brand-new character and with no physical strength what-so-ever he relies on the power of his demonic familiars and his Devil Trigger to fight. His Griffon and Panther familiars are controlled by a single button each; while button bashing the 2 buttons rapidly can seem like a great idea, they do have combo and special attacks that can be purchased and are worthwhile. His Nightmare familiar is summoned when his Devil Trigger is activated and this is where the nod to the non-canon DMC title comes into play. V’s hair changed from black to white and a massive golem like being takes to the battle field and is invincible while Devil Trigger is active.

Dante is the main attraction of the series and is once again back with is signature four styles – Trickster, Sword Master, Gun Slinger and Royal Guard. Each of which change the ability a button on the controller and allow for complete free flowing combo attacks. This is possibly the best character for all out attack if you can get the hang of switching styles on the fly. His Devil Trigger unlocks a demonic form allowing for health regeneration and increased speed as well as attack. Further abilities unlock when Dante acquires new weapons throughout the game. 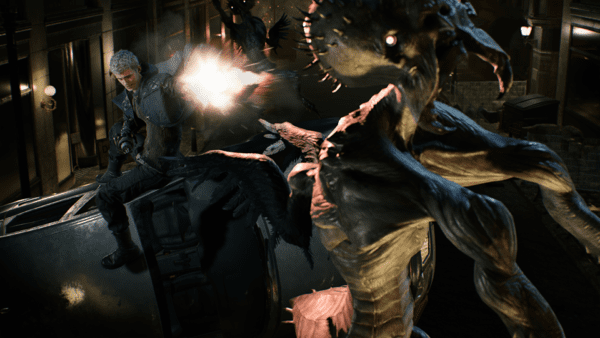 Devil May Cry 5’s story may just be as important as the high-octane combat, where everyone is given a time to shine and have their personal story told. I will not shy away by saying as a long-time fan of the series, 5 might have the greatest story in any DMC game to date. The story switches between the flashbacks of the three characters and how all their stories culminate in the predicament that Red Grave city now finds itself.

The main cast is joined by returning characters and fan favourites Trish and Lady, who as shockingly not playable characters. The game almost disregards the strong female characters for a masculine pissing match between Dante, Nero and V. The latest addition “Nico” is a wise cracking and crude mechanic that keeps Nero in check and is there to supply new Devil Breakers and items that can be purchased. Though her character is not exactly original, she almost plays out like a crude version of Cindy from Final Fantasy XV with her over sexualised appearance.

The graphics for character design are more realistic than in any previous game, and this is down to Capcom’s RE Engine which has been seen in both Resident Evil 7 and the RE2 remake. The engine delivers some outstanding visuals and a new look to Dante and Nero which many people might not like, but if you love the game it will grow on you quickly. The character designs are also accompanied by the returning voice actors, allowing for some great nostalgic value. The last time Nero and Dante were voiced in a new DMC game was 2008’s Devil May Cry 4. Along with the character designs, the enemy and boss designs are a massive return to form. The nightmarish and ghoulish desigsn left me sitting in disbelief. There are possibly some grotesque and hideous creatures that would make Souls players wince.

When playing this game, I never found the gameplay to be boring or repetitive; the boss battles were an absolute joy to encounter and I found only the boss battles in the last couple of levels to be aggravating with a familiar twist. The way in which a player encounters a battle will be uniform, but how you have upgraded your character and how you chose to combat the boss is a unique experience. Nero will receive a boost if you rev his sword to unlock new attacks, Dante will have a great number of choices when wielding his different styles. I saw boss battles as less of a frustration and a great way to learn and use my characters abilities, it was an extremely rewarding experience. 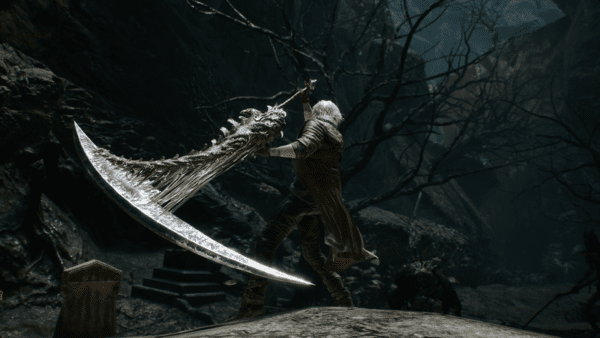 A new addition to the game is brought in when players fall in battle; players would normally be granted the chance to use a gold orb to regain their life in an exchange for a slightly decreased level score but now you can buy back in with red orbs. Players are given the option to select three separate tiers with various amounts of health and devil trigger/devil breaker replenishment they return with. If a player falls multiple times in battle the cost will go up in large increments, and if you don’t have the orbs you can always quit the level and start again or their is an option to buy more orbs with real money – here lies a sneaky micro-transaction. There is never a need to buy more orbs, it takes the grind out the game and you can always return to the main menu and replay an earlier level for the chance to earn extra Red Orbs.

Devil May Cry 5 boasts a brilliant soundtrack, allowing players to battle with some thumping bass lines and heavy guitar riffs. Though if you purchase any special editions you can actually customise the battle music for certain characters. I chose Devils Never Cry from Devil May Cry 3 as my Dante battle music, creating an extremely nostalgic affair when trying to draw out simple encounters so I could hear more of the music. 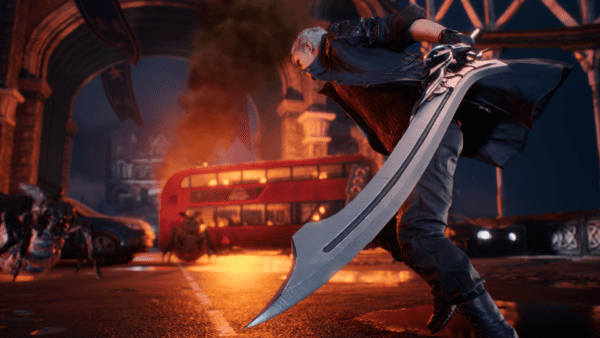 The game has a great story which demands to be told, and the action gameplay goes hand in hand with the epic tale that has been delivered. The players have all taken their places and everyone deserves to experience this absolutely fantastic chapter in the Devil May Cry series. The action will have returning fans slipping comfortably back into the groove while newcomers might have the largest smiles on their faces when they pull off some of the most epic combo attacks you will find in gaming to date. The replay value has massive lifespan with the need to find unlockable items, upgrades to health and Devil Trigger meter.

If I had to find a complaint it is an extremely minor thing to mention – when the game delivers a cut-scene at the end of a mission, players cannot pause the cut scene and instead it will be skipped. This will require a return to the main menu screen and navigating the menus until you find the cut scene viewing gallery. It is a relatively minor thing considering I was playing on the Xbox One X and the loading times were never too long. The greatest thing about Devil May Cry 5 is how well it gets everything right, and it does not play like a love letter that remembers the glory days. Instead, this feels like a brand new chapter that was always meant to be. Devil May Cry 5 is the game that people should be talking about in 9/10 months’ time when Game of The Year suggestions are being made.