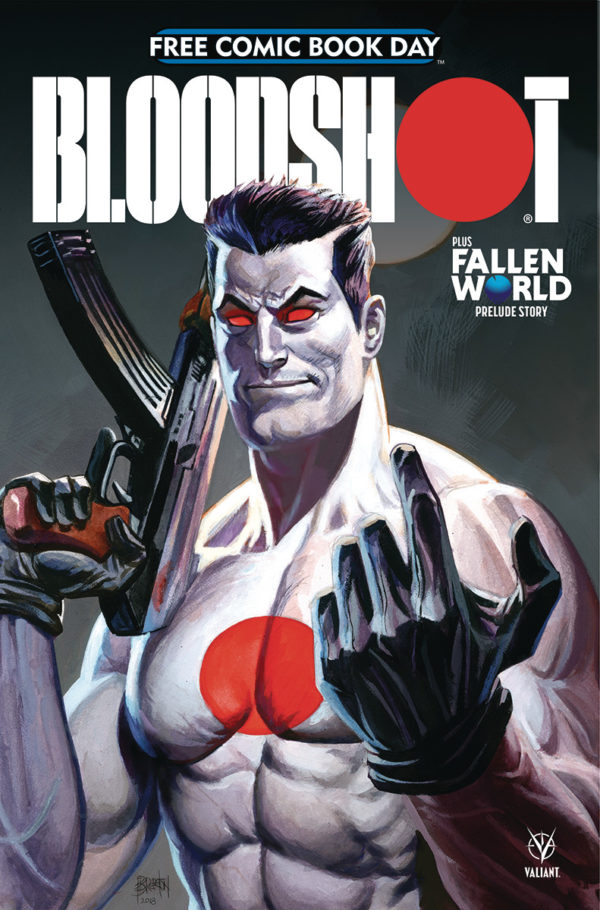 Free Comic Book Day is an absolutely great way to advertise a new series, particularly when that series has a related movie coming out the year after starring Vin Diesel. The brooding man with the crimson patch is due to burst into cinemas in 2020, thus it’s not surprising to see Valiant feature Bloodshot prominently in this forthcoming Free Comic Book Day 2019. The meat of this issue is a sneak-peek from a new Bloodshot series launching this fall, spearheaded by writer Tim Seeley (Nightwing, Shatterstar), with pencils by Tomás Giorello (X-O Manowar, Conan the Cimmerian). The backup story is a few pages from Fallen World #1, a furitistic look into the Valiant universe launching this month, written by the talented Dan Abnett (Aquaman, Titans).

In the feature story, Bloodshot hunts down a terrorist cell known as the ‘Sons of the Last Flesh’, who abduct Dr. Apte, a noble peace prize winning scientist. The sons hope to obtain true immortality, promising to forgive their prisoner for her crimes if she will free them from their ‘weak skin’. Letterist Dave Sharpe takes it easy on the latter half of this issue, as Bloodshot hunts the sons in a pulse-pounding page by page, panel by panel manhunt with very little speech. The story draws to a close as our titular hero walks off into the sunset, with a villianous big bad watching him on security cameras inside of what seems to be a military compound, as they plan their next steps.

For a first peek into a new series, I really enjoyed this. Writing great action in comic books is a hard task, but the star-studded pairing of Seeley & Giorello pull it off to a tee. While the story is not anything to write home about, first issues are obviously meant to just set a foundation and capture your interest going forward. The lack of narration from Bloodshot, and absence of a point of view from him as a character is what really bolsters the impact of this story. It leaves us to fill in some blanks, while bombarding us with strong and vivid action-filled panels. It empowers the titular character as a brutal, mysterious vigilante with a small penchant for wisecracking, ala Deadpool or Lobo. While there’s not a lot to digest in this issue, we can be sure it’ll develop well, as Tim Seeley is a writer who often excels in that issue 12 and onwards space, when he starts to pull all of those subtle little nuances in his scripts together, in a clever and often-genius way (his most recent run in DC’s Nightwing is a great example of this).

As for the other featured story, the peek into Fallen World #1 was interesting enough to pique my curiosity, but at a meager four pages, this excerpt seems more pointed at those who are already reading Valiant comics on a regular basis, who will have a bit more context as to what’s happening here.

The issue is rounded out with interviews from both Seeley and Abnett talking about their visions for their respective series. Of note, Ernie Estrella’s (Syfy Wire) comment that the Bloodshot story almost felt a little inspired by Terminator was a great observation. It does feel like Seeley’s take on action was heavily inspired by broody 80’s action sci-fi flicks, which is an attitude that’s somewhat missing from current day comics.

Overall, Bloodshot: Free Comic Book Day Special was certainly worth my time, and might have persuaded me to add Bloodshot #1 to my pull list for this fall. It works as a beginner friendly introduction to the character, while also making an immediate impact with adrenaline riddled pencils and gritty colour work. It also sparks a little curiosity as to where Seeley will take the character a few months in.

I’d suggest picking up Bloodshot this FBCD, especially if you’re keen to see what to expect from Vin Diesel’s cinematic debut in the Valiant universe next year. Bloodshot #1 will hit stands this fall, while Fallen World #1 is available now.