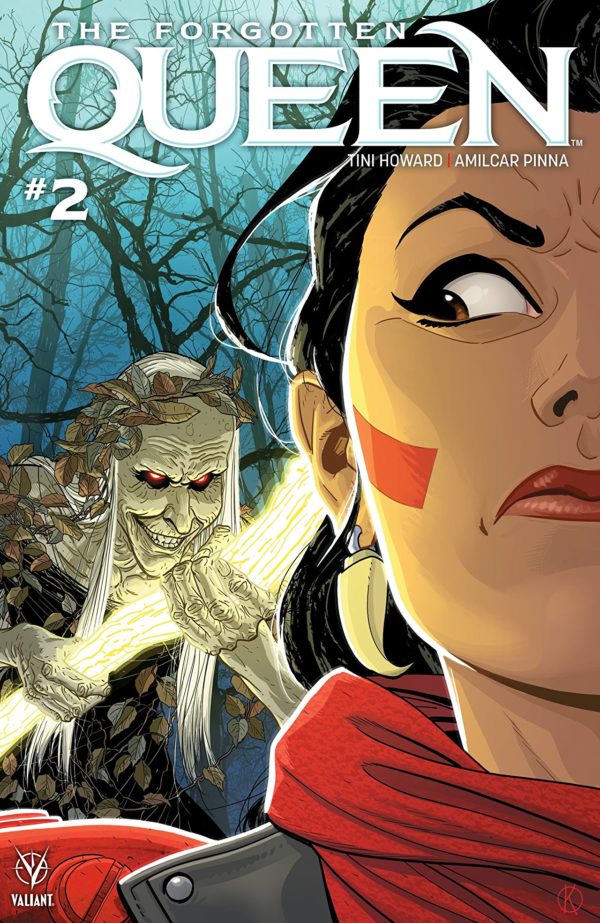 The neat thing about having an immortal at the center of The Forgotten Queen is time is on this comic’s side. Issue one can (and did) eat through Vexana’s Genghis Khan years but that’s a blip in her long history. At the end it was teased she would fall in love and that’s where issue two picks up. Right away writer, Tini Howard, makes some interesting parallels between Vexana’s first meeting with Khan and her introduction to Khutulun. Both leaders start out by calling Vexana “witch” but where Vexana puts up with the name calling from Khan, she continually denies the identity from Khutulun. The fact of the matter is Vexana wants a different relationship with her (at one point Khutulun asks her, “Tell me you didn’t also serve my great uncle in this way?” and Vexana responds, “Hell no.”), but besides the refreshing lack of eye batting at two woman sharing a tent (it seems we’ve gone backwards, as a society, where sex is concerned), her immortality doesn’t raise any eyebrows, either.

This goes for the present-day half of the story, as well. The Forgotten Queen is still splitting its narrative between Vexana and a research ship in the Pacific that’s looking for her armor. In this issue the rest of the crew (and not just their patron, Sarnai Oyuunchimeg) catch on to the fact that whoever owned this armor must be ancient.

It’s always more interesting when everyone’s on the same page, and in confronting her about this Oyuunchimeg becomes the narrator this issue. Last issue the narrator was omniscient and played into the scale of Vexana’s tale, that a storyteller was needed. Here the change to Oyuunchimeg feels appropriate given how introspective Vexana is this time around. She’s looking for answers about herself and here is a scientist who’s studied immortals.

Another change brought on by Vexana’s self-reflection is the range of emotions artist, Amilcar Pinna, gets to play. Issue one was all about cocky Vexana, with her profane language and attitude (sometimes the language felt anachronistic – Deadwood’s been subject to the same debate – but it never felt out of character). Khutulun brings out another side of her and it’s quite startling, to have this other woman turn the tables on our main character (Khutulun isn’t written as a side character – she’s written as someone who doesn’t realize she’s not the lead). Occasionally Pinna centers a panel around Vexana’s face. The dialogue in these scenes, as lettered by Jeff Powell, is for anyone to hear but there’s one exception, where Vexana directs her speech towards Khutulun. In that moment Vexana is putting herself on the line and you can feel it because of how Powell has lettered these scenes in the past.

Ulises Arreola’s colors keeps the two worlds separate. You’re always aware that you’re in an enclosed space on board the ship, because of the way the artificial lights bounce off the walls and tile. The desert scenes, meanwhile, are full of clear skies and scorching sun, while a new setting, where Vexana goes to look for a witch, includes the rare sighting of plant life. As the two time lines grow more in sync, Vexana continues to be an amazing case study. You won’t be forgetting this ‘forgotten queen’ anytime soon.