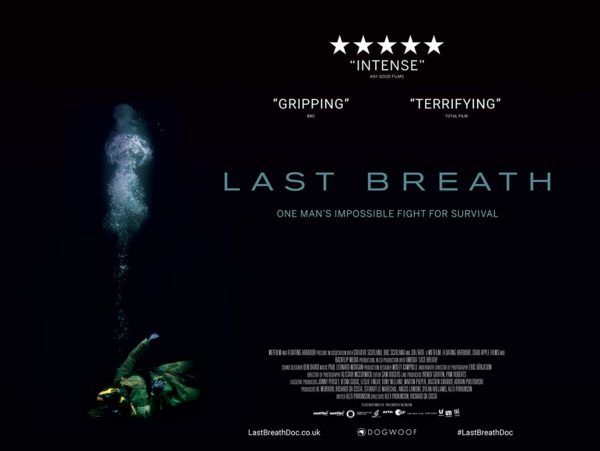 On a deep sea diving expedition in 2012, Chris Lemons was a member of the dozen strong crew who’d descend beneath the crashing waves of the North Sea to repair a seabed structure. However, on this particular night, years of meticulous training are tested when he becomes detached from his vessel, with five minutes of oxygen in his tank, and little chance of survival.

If you’re looking for a similarly sweaty palmed tale of human endurance after the Oscar winning Free Solo, then tilt your head down from the rock face, and look beneath the surface for Alex Parkinson and Richard de Costa’s nerve shredding deep sea documentary, because it makes The Abyss look like a dip in the shallow end.

Using a combination of archive footage from the ill-fated dive, talking head contributions from those at the pounding heart of the mission, and some neatly interwoven recreations, Parkinson’s timeline of events wrings as much tension from the scenario as possible.

It’s a manipulative tactic, withholding information to accentuate the dramatic effect, especially when the premise alone is so fascinating, but it does add a certain cinematic weight to proceedings. In fact, it’s how fictional it all feels that exacerbates the jaw-dropping nature of the unfolding events.

There are claustrophobic POV shots from inside the divers helmets, scanning the otherworldly vistas of the sea bed, which can discombobulate the viewer as they’re forced to search for shapes within the darkness, or the scene in which the divers drop off the submersible they’re attached to, plummeting into the void. And just when your tension is spring wound because you can’t see anything, the sound of the divers umbilical chord snapping will leave you terrified and helpless. Last Breath is put together brilliantly.

All this would be for nothing if you didn’t invest in the people in peril at sea, so the doc takes great care introducing you to the crew and peripheral players, such as Chris’ fiancé, or his main diving team, who candidly reveal that “no one wants to be in with a knob” during the selection process for their month-long expedition. Humour is as prevalent as heart palpitations, with the weird helium voiced exchanges of the divers as they prep to submerge, at odds with the downright scary nature of their work.

It’s these human touches which help to ensure that when you’re presented with some of the many indelible images on display here, such as the ROV desperately searching for Chris in a vast expanse of nothing, or one shot in particular that’ll take your own breath away, they hit you with the weight of bends inducing pressure.

As gripping as any lost in space/at sea/up a mountain blockbuster you can think of, Last Breath is a fascinating and frightening piece of documentary film-making.