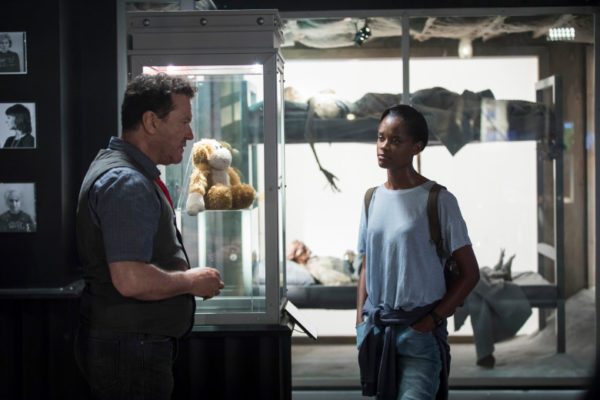 Black Museum is an anthology piece that closes out season 4 of the show. The episode, which tells the story of a young woman visiting a museum full of horrors, is one of the show’s most self-reflecting yet. Full of easter eggs and nods to previous episodes, the episode is in many ways a celebration of all that has come before it.

Many fans on the internet are using Black Museum as the episode that confirms the theory that every episode of the show has been set in the same universe and I must admit, the evidence is pretty damning. The ending has also caused some controversy but for me, it worked. If this is the end of the timeline that we know, or at the very least, near to the end, then people taking action into their own hands in a world that does not value individuals seems a logical progression.

One of the show’s best ‘what’s going on’ episodes, White Bear feels like two separate episodes wrapped into one. The first half of the episode is a standard horror movie set-up, with a girl being pursued by an angry mob for reasons she can’t remember, while the second half delivers one of the show’s best, and most surprising twists.

The final moments of this episode are some of the strongest in the second season of the show, and also some of its most memorable.

Maybe it’s down to my massive fear of spiders but Playtest still remains as the scariest episode of Black Mirror for me. The episode is very much open to interpretation but for me, it’s a clever commentary on the way our lives are becoming more and more like a video game as time progresses.

The episode’s final few moments are devastating to watch and the horror is ramped up expertly throughout the episode. 10 Cloverfield Lane director Dan Trachtenberg was brought in to work on this episode and his influence is very obvious. This is an utterly terrifying 60 minutes of television.

While The National Anthem, the story of a prime-minister being forced to have sex with a pig, may seem hilarious now, back in 2011 it was a piece of bold and provocative television that really set a precedent for what Black Mirror had to offer us.

The episode, while having a comical premise, is far from funny as we wince in horror at what we are witnessing and the events leading up to the act are executed perfectly as well. Brooker really knows how to ramp up the tension and he highlights that in ‘The National Anthem’. The episode was also a very smart commentary on the nature of us an audience, with the baying crowds watching the incident providing some of the episode’s best observed moments.

9: Shut Up and Dance

When I was speaking to people about writing this list, Shut Up and Dance was the episode that a lot of people mentioned to me, and it’s easy to see why. Black Mirror is often at its finest when it feels the most real, and Shut Up and Dance feels, perhaps more than any other episode in the show, like it could take place tomorrow.

The episode follows a boy who is being blackmailed by computer hackers, who must complete a series of tasks to win himself his freedom. Shut Up and Dance is particularly memorable, not only for its incredibly twisted ending but because it is so unrelentingly bleak. Watching it, it is impossible to shake the impending sense of doom, it offers its characters no sense of redemption at all and those final few moments just cement that.

Nosedive, the opening episode of season 3, is an episode that has really grown in my estimation on repeat viewings. Set in a world where social media ratings and the opinions of others dictate our lives, the episode presents us with a sterile and clinical version of the future, one which is lacking authenticity and genuine, human emotion.

The episode’s closing moments, where we see Bryce Dallas Howard’s character effectively commit social suicide is Black Mirror at its finest, presenting us with a twisted morality tale and a powerful warning about the direction we are heading in.

White Christmas ranking so highly on this list might not sit too well with some people. The episode, an anthology piece starring Jon Hamm and Timothy Spall feels like a bit of an anomaly in the Black Mirror universe but I still love it nonetheless.

The episode is a clever comment on the way we can treat people online and have a reckless disregard for how our decisions may impact others. Jon Hamm and Timothy Spall are both expertly cast here and the episode moves along very nicely, despite its inflated run-time.

The final twist in the episode may feel a little contrived but it ties the episode together effectively and provides a satisfying end to a great episode of the show.

Click the button below to continue on to the last page…