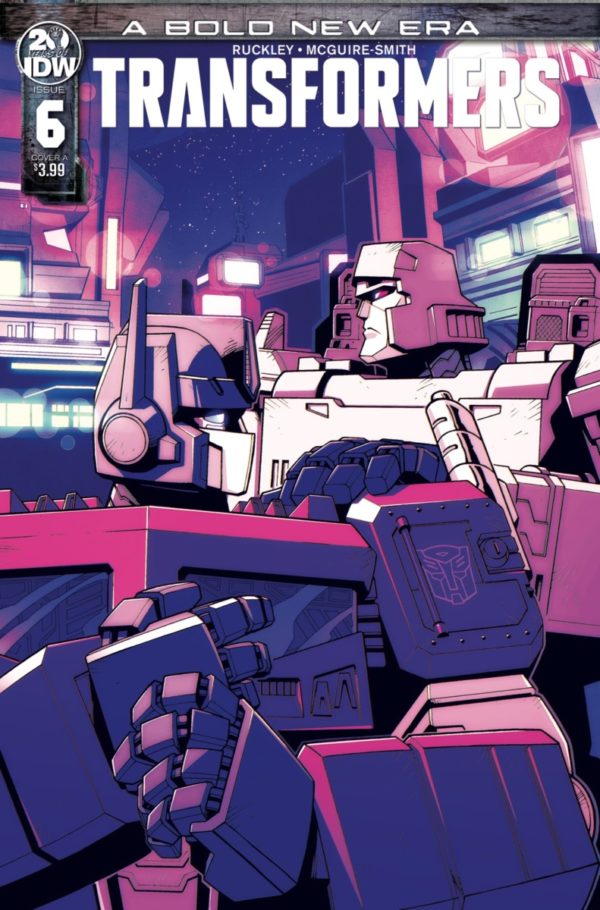 Over the course of IDW’s first few issues of the new Transformers series fans haven’t gotten a whole lot of information on the backstory of Cybertron, or when they have it’s been through second-hand accounts. Brian Ruckley uses Transformers #6 as a break from the main story, and the previous issue’s cliffhanger, to pick up on Orion Pax’s meeting with the mysterious Codexa from Transformers #3 and delve into his past with Megatron. While it is not a very exciting issue, Ruckley writes a very good take on Orion and Megatron in the years after a war and the first changes to Cybertronian society that helps inform where they both are now and is perhaps the series’ best issue so far.

Ruckley keeps the focus squarely on Orion and Megatron throughout the story, showing a time when the two bots were not on opposing ideological sides. They are much less tense around each other as Ruckley displays a true sense of friendship and camaraderie between them. Ruckley’s take on Orion in particular shows just how much he’s changed between the flashbacks and the current time where he appears to be much more weary and Prime-like rather than the Orion Pax Megatron got on so well with. Even the contrast with Megatron is interesting as he was also fairly optimistic with Cybertron’s future only to be let down. It makes for a nice parallel between the two as Orion and Megatron had high hopes for the changes in Cybertronian society but were eventually dashed by reality, putting them on two separate but similar paths while breaking their spirits down. The only downside is the gap in time between the earliest scene and their meeting on the Winged Moon as it’s not quite a clear picture of how the two characters got to where they were. Nor do we get any real answers on who Codexa or Termagex is despite those two having a profound effect on Orion and Megatron.

One criticism that grew with each issue was the way little pieces of backstory were given through a lot of exposition, mostly due to Rubble being the reader’s mouthpiece for the many questions regarding Cybertron. Transformers #6, however, balances the backstory and exposition well in a way that does not feel forced. We finally get more information regarding the Nominus Edicts and why Megatron believes they are holding all Cybertronians back from their full potential. Ruckley does a nice job describing Megatron’s philosophy about stability being a trick to make you stand still and there is no true point of equilibrium, but rather it is constantly changing and adjusting. It’s almost funny that Megatron will switch from this belief to a more absolutist and tyrannical one once he forms the Decepticons.

Transformers #6 also marks a first for the series as Beth McGuire-Smith is the only artist attached to the issue, not only handling pencils but colours as well. McGuire-Smith illustrates Orion and Megatron nicely, from their movements, facial expressions and surroundings. Even when they are standing still, they appear animated due to the body language McGuire-Smith utilizes. Her colours are bright and vivid, particularly in the sequence on the Winged Moon. None of the panels feel dull, but help the story move along at a good pace. One of the reasons Transformers #6 is the series’ most memorable issue is because of the consistency in the artwork and the detail she gives.

While there isn’t any more movement on the central murder mystery of the series, Transformers #6 was a welcome break from the main story thanks to the focus Ruckley gives Orion and Megatron. Their friendship feels pretty authentic with some nice parallels of their beliefs, personalities and who they ultimately will become. The character-driven nature really succeeds where the last couple issues have not. McGuire-Smith’s artwork only elevates the issue thanks to her pencils, colours and consistency. It’s a nice save for the series and hopefully one Ruckley can continue in the upcoming story.