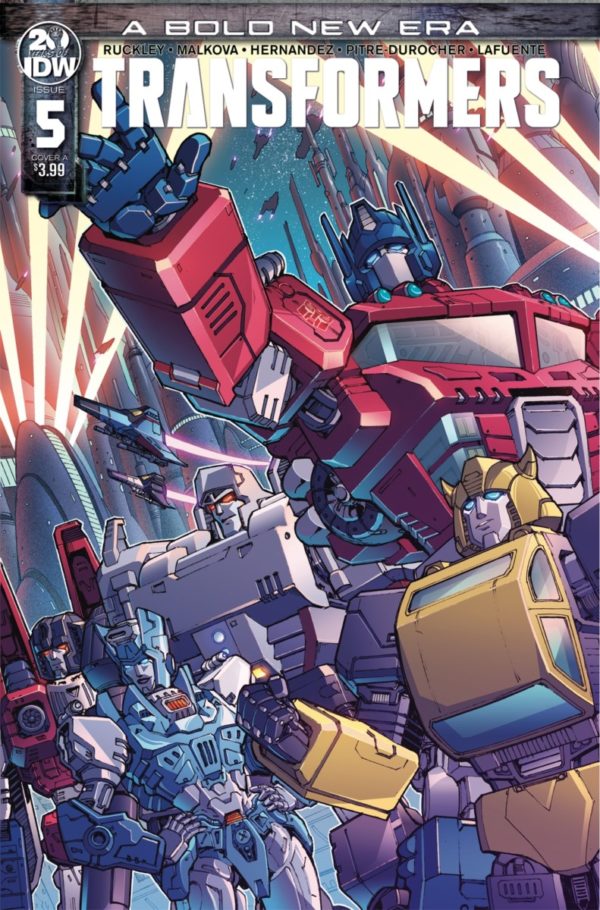 IDW’s latest issue of Transformers makes a couple interesting developments in the story, though it’s still plagued somewhat by the same problems of the previous couple of issues. Brian Ruckely doesn’t focus as much on the world-building aspect this time around as he instead moves characters further into their journeys. However, some developments are introduced but then are left hanging rather abruptly.

Transformers #5 spends a lot of time jumping between characters in a quick succession of scenes, from Megatron giving his latest speech to Chromia learning of an alarming fact regarding the mysterious Rise or Bumblebee’s private meeting with a surprising bot. Ruckley again drops little hints as to the state of Cybertron’s past and society without actually going in depth into its history. It’s more little pieces that add up to a bigger picture, but we still don’t know what form that picture is taking. The fact that a couple of these threads aren’t even mentioned again, mainly Chromia discovering hundreds of Cybertronians have apparently gone dark since Brainstorm’s murder, undermines their importance in this issue.

Most of the issue deals with Rubble as he explores parts of Cybertron by himself. He hasn’t quite succeeded as an interesting character of his own as Ruckley has used him more as a proxy for the reader, discovering new facts about Cybertron and being told a great amount of exposition. The issue again deals with Bumblebee’s doubts that he’s not being a good mentor and doesn’t know how to properly teach Rubble, though his doubts seem to stem from his concerns with Cybertron just as much as they do with him. His meeting with Soundwave to potentially join Megatron’s Ascenticon movement is one of the standout scenes of the issue not just for the way Ruckley has written this pair, but also because of the reveal Bumblebee was expelled from the Autobot security force rather than leaving by his own choice. It’s an interesting development for Bumblebee since he’s pretty much always been one of the most dependable Autobots no matter what iteration of the franchise. Should he join the Ascenticons, this opens up some new avenues for Ruckley to explore.

As for Rubble, his fate is much less clear as he witnesses Quake murder a Voin scavenger, potentially the same one they’ve been looking for in Brainstorm’s murder. This is a nice, if brief, payoff to the concerns several bots had regarding Quake from the third issue as we catch a glimpse of his violent tendencies. It’s likely Rubble will be found severely injured, but it would be an interesting development if Ruckley actually did kill off Rubble now. However, if Rubble were to die then you’d have to wonder what the point was for his character to begin with aside as a reason for massive amounts of exposition and backstory to be given to readers. There’d hardly be a point to the character which is why it’s likely we haven’t seen the last of Rubble quite yet.

The artwork is again split by three different artists. Angel Hernandez has the majority of work as is usual and Sara Pitre-Durocher returns as well, working mostly on Bumblebee’s story, but Anna Malkova makes her introduction to Transformers in the opening pages. Malkova and Pitre-Durocher’s work is quite animated through their segments. Malkova illustrates Megatron well and is fairly expressive with her facial features. It’s nice to see Pitre-Durocher work on Soundwave, one bot she never really got to work on in the old continuity, while Hernandez does a good job differentiating each bot in the large crowds Rubble walks through. Joana Lafuente’s colours are vibrant, especially during Bumblebee and Soundwave’s meeting, and she displays a nice balance between the brightness of Cybertron and the darkness of its seedier areas.

While Transformers #5 is an improvement over the last couple issues, it is still hindered by some abrupt scene endings with information that doesn’t get picked up again. The story moves in the right direction though with some interesting character developments, particularly with Bumblebee, that is helped by the good artwork from Hernandez, Malkova and Pitre-Durocher. Ruckley is still playing the long game, but now there’s a bit more weight behind the brewing situation for all the bots and it is intriguing to think of where it can go from here.