Curve Digital and IronOak Games have announced that their strategy RPG For The King is now available on Playstation 4 and will be available on Nintendo Switch tomorrow.  An Xbox One edition will be available on Friday, however, those with a Games Pass can enjoy the game now.  A launch trailer can be seen below to accompany the release. 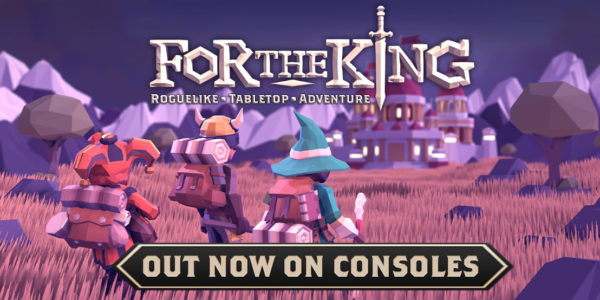 In this challenging RPG, the King has been murdered and now the once peaceful kingdom of Fahrul is in chaos, as a last resort to end the upset, the queen has requested her subjects rise up to stem the tide of impending doom.

Players will dive in to the world of Fahrul with each playthrough being a completely different experience thanks to the procedurally generated maps, quests and events.  The game’s most replayable aspect comes in the form of Lore which is generated through battles, story content and quests and can be used to purchase new characters, locations and much more.

“After a very huge success on PC we’re very happy and excited to bring the full For The King experience to console players – featuring all previously released content! Players now will be able to experience the world of Fahrul and fight to end the chaos.” Commented Michael Fisher, Product Manager at Curve Digital.

For The King is available now on PS4 and will arrive on Nintendo Switch and Xbox One this week.  All editions have a 20% launch discount available for 2 weeks.