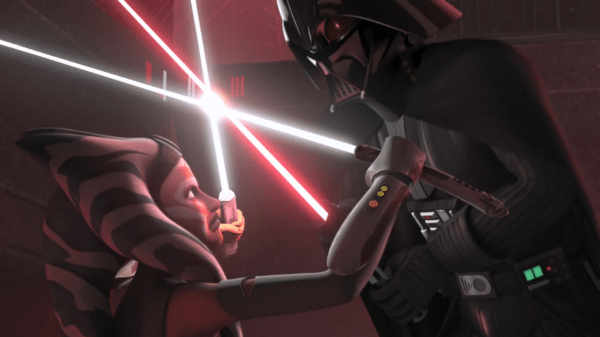 Since the end of The Clone Wars, fans wondered what happened to Anakin Skywalker’s apprentice after she left the Jedi Order. When she was introduced in the Season 1 finale as the Ghost’s contact to the Rebellion, it seemed only a matter of time until she came into contact with Darth Vader. The reunion finally happened in the Season 2 finale ‘Twilight of the Apprentice’ and it was just as tense and tragic an encounter as fans thought it would be.

At this point Ahoksa knew, or heavily suspected, who was underneath that mask as his presence felt a bit familiar. Refusing to help Vader in his hunt for Jedi and the Sith’s quest for power, Ahoksa fought him in a highly animated and very well choreographed duel, one that showcased both their impressive skills with a lightsaber as master and apprentice fought each other. It was a bitter sweet fight as there seemed to be only one possible outcome for Ahsoka Tano.

What was so great about wasn’t just the fact that James Earl Jones returned to voice the character again, but even Matt Lanter, the voice actor for Clone Wars’ Anakin, came back to deliver just one heartbreaking line to Ahsoka. It was a conflict filled with tense emotion that fulfilled the dreams of many Clone Wars and Ahsoka fans. 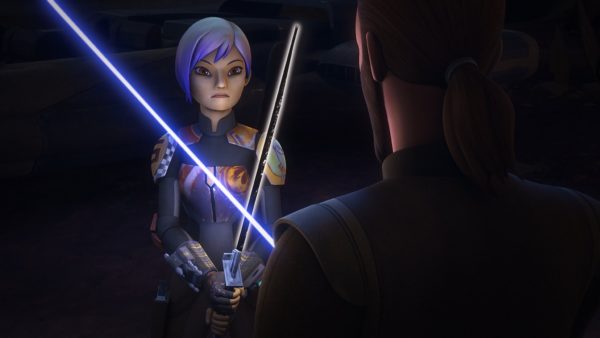 Sabine Wren is the one crew member of the Ghost who once had a role in the Empire after they occupied her home planet of Mandalore, even having what was said to be a promising career in the Imperial Academy. Her past was mysterious, however, with the only hints being that she felt remorse for some past action and wouldn’t follow orders blindly again.

Sabine’s past is fully revealed in ‘Trials of the Darksaber’ during an intense training session with Kanan. Finally letting her emotional turmoil loose, Sabine recounts how she developed weapons and bombs for the Empire during her time at the Imperial Academy. The Empire then used the very bombs she built against her own people, forcing her to leave. However her family, which prides itself on loyalty and honour, declared her an outcast.

The revelation from Sabine was incredibly emotional thanks to Tiya Sircar’s performance, being her strongest scene in the entire series. Sabine’s development from there – turning from a simple soldier to vital rebel leader and bringing hope once again to Mandalore – helped bring her arc full circle and this was the beginning of that amazing transition. 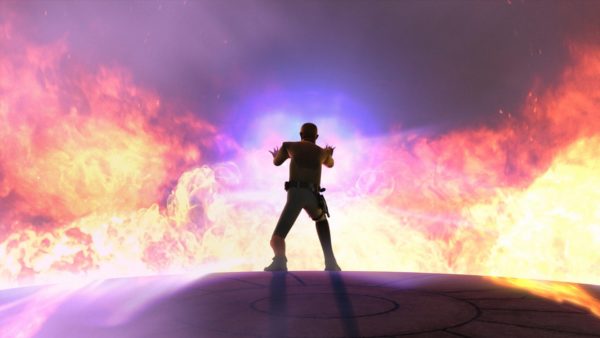 Given that Luke Skywalker is the only known Jedi Knight during the Original Trilogy, it was almost a forgone conclusion that Kanan and Ezra would be goners at some point in the series. While Ezra’s fate is a mystery, Kanan’s is pretty definite as he died heroically.

After Thrawn and Governor Pryce captured Hera in the Season 4 episode ‘Jedi Night’, Kanan, Ezra and Sabine led a rescue mission into the heart of Lothal to get her back. Just as they were about to escape in a shuttle, Pryce ordered her AT-AT to fire on the fuel tank the team stood atop of. Not wanting to see the others perish, Kanan stayed behind and used the Force to hold the explosion back for as long as he could while also pushing Hera, Ezra and Sabine’s shuttle away, sacrificing himself so they could live.

The scene was beautifully shot and animated with all the sound dropped out. Only the music played over the images as Kanan made the ultimate sacrifice. The animation on the facial expressions of the three survivors was outstanding as their anguish and helplessness was plain to see, as was Kanan’s determination. A great, subtle moment that I didn’t pick up on until I re-watched it was how Kanan, who had been blinded for the past couple seasons, regained his sight for just a moment through his connection with the Force. As tragic and painful as Kanan’s death is, it is the most impactful and devastating of the series.

Those are what I consider to be the top 10 moments in Star Wars Rebels! What were some of your favourites? Let us know in the comments below or tweet us @FlickeringMyth…