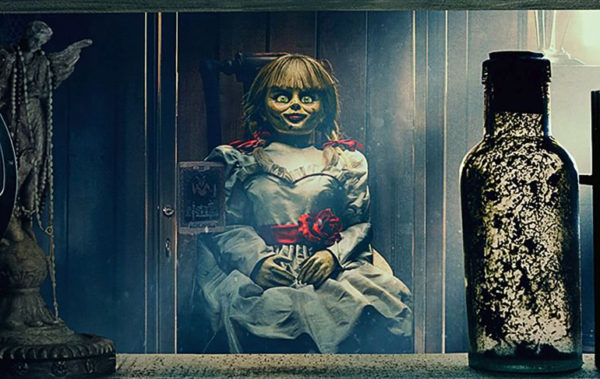 With less than a month to go until the release of Annabelle Comes Home, a new clip has arrived for the third instalment in the franchise which sees Ed’s (Patrick Wilson) life put in danger as the possessed doll causes him to be pushed in front of a moving truck.

Along with the clip, we also have a featurette which takes us behind the scenes of the movie and includes an interview with Judy Spera, the daughter of Ed & Lorraine Warren, and her husband Tony, where they discuss the real Annabelle who remains locked inside the Warrens’ occult museum to this day.

Determined to keep Annabelle from wreaking more havoc, demonologists Ed and Lorraine Warren bring the possessed doll to the locked artifacts room in their home, placing her “safely” behind sacred glass and enlisting a priest’s holy blessing. But an unholy night of horror awaits as Annabelle awakens the evil spirits in the room, who all set their sights on a new target—the Warrens’ ten-year-old daughter, Judy, and her friends.

Annabelle Comes Home is set for release on June 26th in the US and on July 10th in the UK and sees Patrick Wilson and Vera Farmiga reprising their roles as Ed and Lorraine Warren alongside newcomers to the franchise McKenna Grace (Gifted), Madison Iseman (Jumanji: Welcome to the Jungle) and Katie Sarife (Youth & Consequences).