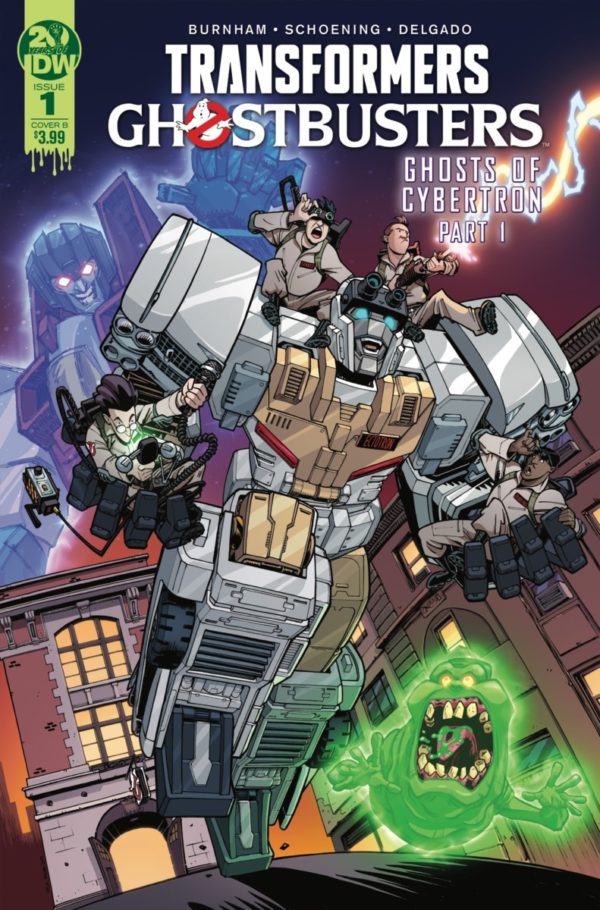 I was born in the late 80’s. Before I was old enough to get into a lot of the things I enjoy now, such as Batman, Superman or James Bond, I gravitated towards the original Transformers cartoon series and Ghostbusters. More than any other 80’s property popular at the time, the adventures of the Autobots and Ghostbusters drew my young brain in a way G.I. Joe or Teenage Mutant Ninja Turtles couldn’t. So imagine my reaction when IDW announced their plans to celebrate both franchises 35th anniversaries with a Transformers/Ghostbusters comic crossover written and drawn by IDW’s usual Ghostbusters team Eric Burnham and Dan Schoening. Coming off the recent Star Trek vs. Transformers crossover, does Transformers/Ghostbusters #1 offer something different enough while meeting some high levels of anticipation?

The story begins on Cybertron with a slight alteration to the G1 Transformers continuity. Just as the Autobots abandon the planet to escape the war with the Decepticons, Gozer the Gozarian arrives in Cybertronian form and destroys Cybertron along with Megatron and all the rest of the Decepticons. A millennia later, the Autobots detect a strange signal coming from Earth and send Eck – the new Autobot made specifically for this series – down to investigate, where he crosses paths with the Ghostbusters and a ghostly apparition of Starscream.

It becomes pretty clear within the first few pages how well Burnham captures the voices of the various Transformers. From the banter between Bumblebee, Cliffjumper and Eck to Megatron berating Starscream, Burnham utilizes the cheesy G1 spirit in a fun and endearing way that would fit right in with the original series. The new bot Eck is given the majority of focus over the more recognizable ones, but Burnham makes him fairly enjoyable to read. He comes across as a mix between Bumblebee and Perceptor – a very intelligent, well-spoken rookie yearning for a little bit of adventure. He definitely makes an impression and Burnham already has some nice chemistry between him and Bumblebee.

On the Ghostbusters side, perhaps it shouldn’t come as any surprise, but having never read any of Burnham’s previous Ghostbuster series for IDW over the years, he captures the voices of the team very well. Just as he does with the Autobots, the banter between the Ghostbusters is funny and very much in line with the characters. You can almost hear the original cast’s voices as they battle a ghost and try salvaging Ecto-1 from an accident. It’s pretty entertaining even if Burnham keeps both franchises largely to themselves in the issue, but the slow burn to get the Ghostbusters introduced to a Transformer isn’t a bad one.

The artwork from Dan Schoening is nicely illustrated and animated with a great G1 look to the Transformers scenes. One memorable sequence is the introduction of his Cybertronized versions of Gozer and Zuul. Not only are their looks adapted to Transformers neatly, there’s also some inclusions here as to Gozer’s possible connection with some other longtime Transformers villains that should make it interesting. And while the Ghostbusters obviously take more influence after their IDW versions rather than the films or even The Real Ghostbusters, Schoening makes each of them look distinct and allows some nice choreography between them as they bust a ghost. Luis Antonio Delgado elevates Schoening’s art with some vibrant colours throughout the issue, but in particular the Cybertron sequence (which also contains a couple subtle references to the G1 cartoon and The Transformers: The Movie). It’s not just a fun book to read, but a good one to look at too.