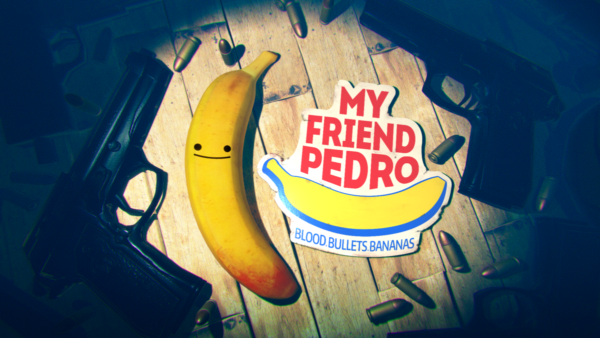 The low-fi indie shooter is certainly a crowded sub-genre these days, so what better way to stand out in a busy field than compel players to slaughter hundreds of anonymous goons at the command of a disembodied, sentient banana? That’s pretty much all the set-up you need in this plot-light, action-heavy romp that, while at times inelegant, delivers the expected goods with frantic panache.

My Friend Pedro is a simple, snappy side-scrolling shooter where players battle across 40 inter-connected levels that last roughly 5 minutes a-piece. You’ll work your way through large warehouses, sewers and high-tech facilities while firing at endless swarms of Bad Guys…pretty much just because.

And with such a diverse array of combat options available, that’s plenty impetus. You can shoot while diving through the air like Max Payne, even employing generously doled-out slow-mo for precision, or alternately do any of the following; ricochet bullets off platforms, kick explosive objects, smash through windows and, if the occasion presents itself, split your aim with two weapons (which is decidedly less fiddly than it initially seems). The more stylish your kills, the more points you’ll accrue.

As things ramp up you’ll receive more advanced weapons such as shotguns, automatic rifles and even a sniper rifle later on, and occasionally you’ll gain use of a skateboard to pull off some especially John Woo-worthy kills. 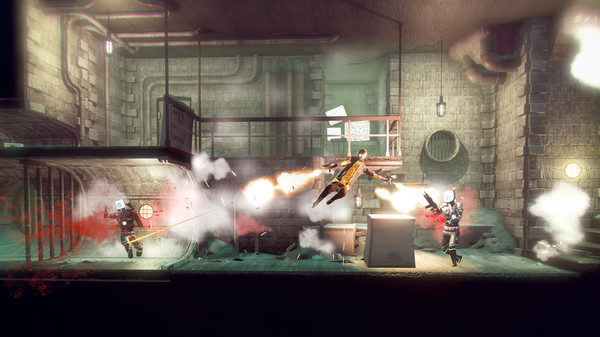 Traditional shoot ’em up levels are periocally interrupted by more surreal and unconventional sorties, such as a motorcycle chase or a boss fight. It’s fair to say that enemy strategy doesn’t really change all that much throughout the game no matter the form a level takes, but the later introduction of physics-based platforming and other non-human obstacles such as mines and lasers add a few fun wrinkles.

In addition to online leaderboards for every stage of the game, there’s also a GIF automatically generated at the end of each level, because if there was any lingering doubt, this is indeed a game made for social media boasts.

And indeed, it’s the thrill of the sleek carnage that ensures My Friend Pedro stays fun even when the occasional feeling of repetition kicks in. Thankfully, between the bite-sized nature of the levels and a roughly four-hour length for a single playthrough, it rarely sticks around in one place for too long.

This is where the game’s scant plot more-or-less becomes a positive; there’s no Hotline Miami-esque downtime here, and beyond the very occasional three or four lines of text, it’s pretty much wall-to-wall action all the way to the finish line. It’s definitely fair to say that the story is so not-there that developer DeadToast Entertainment needn’t really have bothered at all, but it’s unobtrusive and, if you really desire, easily skipped. 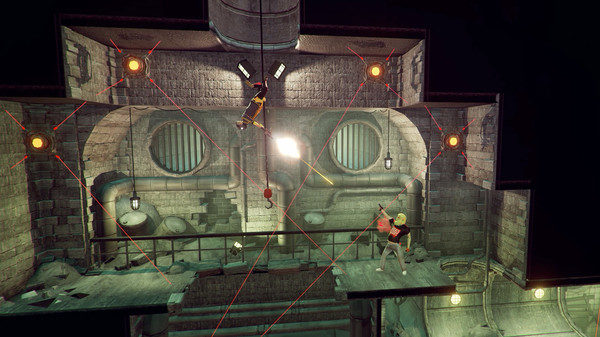 The biggest surprise here, however, is that My Friend Pedro is uncharacteristically forgiving compared to other games in the genre. There are no one-shot deaths here, and the player has a tripartite health bar which, on Normal difficulty, will regenerate and cause infrequent deaths for most players until the later stages of the game.

You can also dodge to waltz through hails of enemy gunfire, and the plentiful doling out of slow-mo certainly lets players focus on causing as much balletic mayhem as possible rather than obsessing over a dwindling health bar. Even when you do die, checkpointing is extremely generous, usually only throwing you back to the end of the last enemy encounter (so, maybe 15 seconds?).

While many similar games will keep things punishing even on lower difficulties and ramp up to nigh-on impossible, My Friend Pedro is an admirably accessible offering, and one which presents Hard and Bananas difficulty settings for those who prefer some extra challenge (as many inevitably will because, honestly, the game’s general ease on Normal is really quite surprising).

The most nagging flaw throughout, meanwhile, is surely its presentation, which is undeniably on the cheap side. Granted, this is clearly an indie title created on a budget, but even the text font used throughout the game looks hilariously cheap; a minor nitpick, for sure, but one all the same. 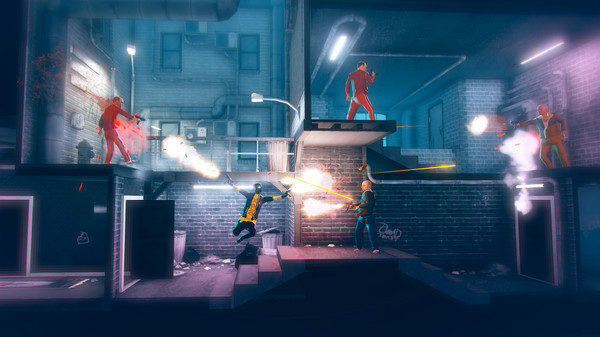 The game’s general art-style isn’t particularly attractive either; it’s fair to say that indie shooters have thoroughly abused neon to death, but there are only so many times you can be wowed by these fairly bland industrial settings. Things thankfully get slightly more surreal and intriguing later on, but the graphics and art are absolutely not the reason to play this game. The same can also be said of the relatively generic, pulsing electronic score and the total lack of voice acting for the game’s brief story beats.

This threadbare approach also occasionally seeps into the gameplay; close-up aim feels frustratingly imprecise at times, though that’s clearly not the direction the game is steering players, indicated by the ability to alternately kick enemies who get too close for comfort.

The boss fights also feel mildly janky and hurriedly thrown together, especially a promising yet rather lacklustre motorcycle chase that might frustrate were it not so easy. The game at least ends strong, with a barmy final boss encounter sure to leave fans grinning maniacally as they do battle.

My Friend Pedro doesn’t reinvent the wheel, but its big success is taking a genre known for its punishing difficulty and paring things down at the lower end. There’s still plenty to be challenged by higher-up, resulting in an uncommonly democratic offering for a game of this type. It’s not particularly dazzling to look at, but mechanically sound and a whole lot of grisly, moreish fun. 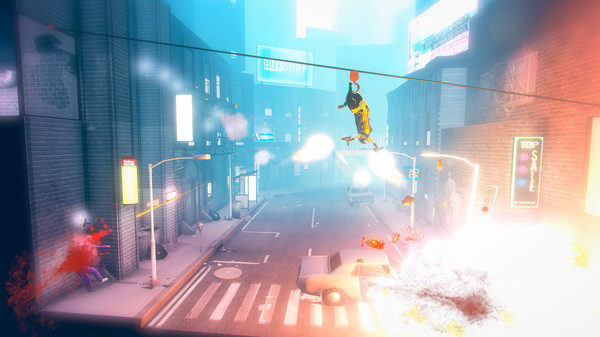 Cons:
– Presentation and art style are unremarkable.
– The low-effort story is totally unnecessary.
– Close-up aim is rather wonky.