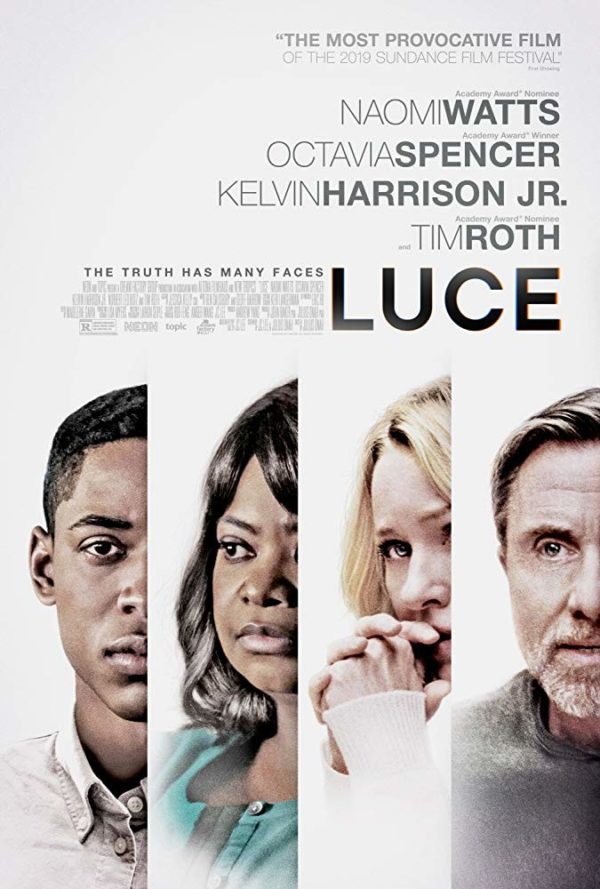 A married couple is forced to reckon with their idealized image of their son, adopted from war-torn Eritrea, after an alarming discovery by a devoted high school teacher threatens his status as an all-star student.

Unpacking Luce (both the character and the movie) is nearly an impossible task. Stripped-down to its bare minimum, co-writer/director Julius Onah’s (adapting the recent stageplay from J.C. Lee that’s timeliness continues to rise) psychological thriller pits the titular former child soldier turned all-star high school student (exemplary grades, impressive athleticism, confident public speaking, assured counterpoints during competitive debating, etc) in an escalating rivalry with his stern/bitchy (characters use both of those words with part of the script’s brilliance coming from the various ways we perceive people without actually knowing much about them) world history teacher Harriet Wilson (Octavia Spencer, delivering an explosive performance of her own).

He’s a model student, while she thinks he is hiding sinister motives due to a provocative and convincingly worded school assignment encouraging violence as a societal cleansing. The nature of the essay was to choose a historical figure and pen a speech using their voice; how much of this result is Luce and how much of it is fiction? Using these unsettling events as a motive, Harriet searches Luce’s locker (she is unaware that students share lockers and sometimes might even hide risky items there as no would suspect him of foul play) finding illegal fireworks apparently as strong as a shotgun blast. Who does its ownership really belong to? 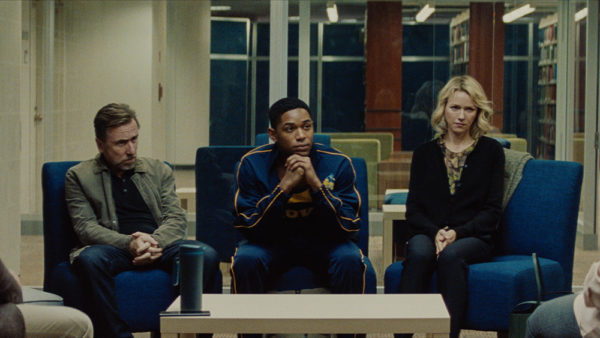 There really is no key to figuring anything out here for good (there’s even a sexual abuse scandal going on within Luce’s circle of friends adding more fuel to the fire, and yes, Luce could be considered a suspect himself considering we are never really sure what his mind is thinking), but Kelvin Harrison Jr. is scorchingly good at keeping us guessing. At times, you can tell there is absolutely a façade he is bringing to his dialogue, manipulating those around him with borderline sociopathic mannerisms. He’s verbally confrontational, and the kid might be too intelligent for the world around him. Scarier, he might even be dangerous.

That’s without getting into the numerous dialogues brought up regarding race relations, expectations, flawed liberal sainthood, privacy, identity, and trauma. Naomi Watts and Tim Roth play the adoptive parents of Luce, and whether or not Harriet is attempting divide and conquer them or not to turn them against their son, it becomes clear that they don’t know their own son. To be fair, Luce might not even know himself; he is without a doubt mentally unstable regardless of his countless accomplishments, with the only question being how unstable. But for every moment you think he’s going to snap and burn down the school, there are reminders of his excellence and promising future. Kelvin Harrison Jr. is incredible in the sense that no matter what we try to decode, we are left with few answers despite a solid understanding of Luce’s seemingly bipolar personality.

Slow-motion shots of Luce performing track running are punctuated by an invasive thumping synthetic score (the kind that would fit right in during a Halloween movie) grounding the mounting tension into the vein of a horror movie. Luce breaks down, confessing that the world has made him feel as if there are only two choices; becoming a monster or a saint. The outstandingly tight script (J.C. Lee contributed to the adaptation) never wastes a second in elevating the dynamics between all of these characters, but we ourselves consistently wonder which of those labels Luce will become. Most people are somewhere in between; the circumstances of Luce’s life and treatment from everyone around him lead him to believe there’s only one option for him.

Make a mistake about it, Luce’s parents and especially Harriet (who is dealing with a drug-addicted, mentally insane sister that has an uncomfortable hysterical public breakdown bringing on questionable police brutality sure to spark conversation, as is just about everything in the movie) are not villains. The word miscommunication gets thrown around a lot, but it’s not so much miscommunication other than individuals pressuring Luce to become whatever is ideal or fitting to them. In certain aspects, the thoughts they bring up with make sense, others not so much. 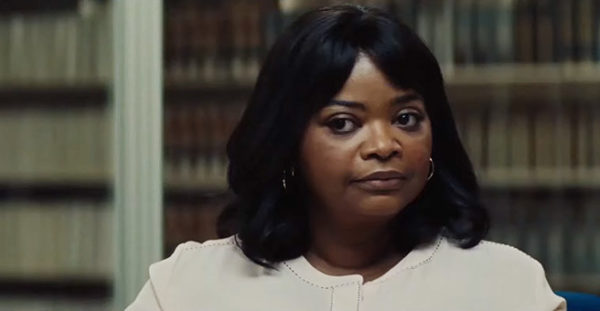 Save for one interaction between Luce and a stoner buddy/black peer discussing the unfair ways the faculty treats him due to stereotypes and perceptions while Luce automatically gets a pass for everything symbolically representing the kid that can do no wrong, not enough is done with the student drama, although that’s really the only negative thing I have to say. It’s a case of sometimes too much ambiguity being a detriment more than anything but still functions as transfixing drama.

If you haven’t been following along, Luce is not conventional storytelling on the road to a definitive ending, but rather a thriller with a heightened sense of maturity. It refuses to fall into predictability or a formula, using its theatrical foundation and captivating script to launch off from one poignant dialogue exchange to another. Fortunately, the killer ensemble crushes the material; it’s a series of debates with the ferocity of fireworks exploding in your face.