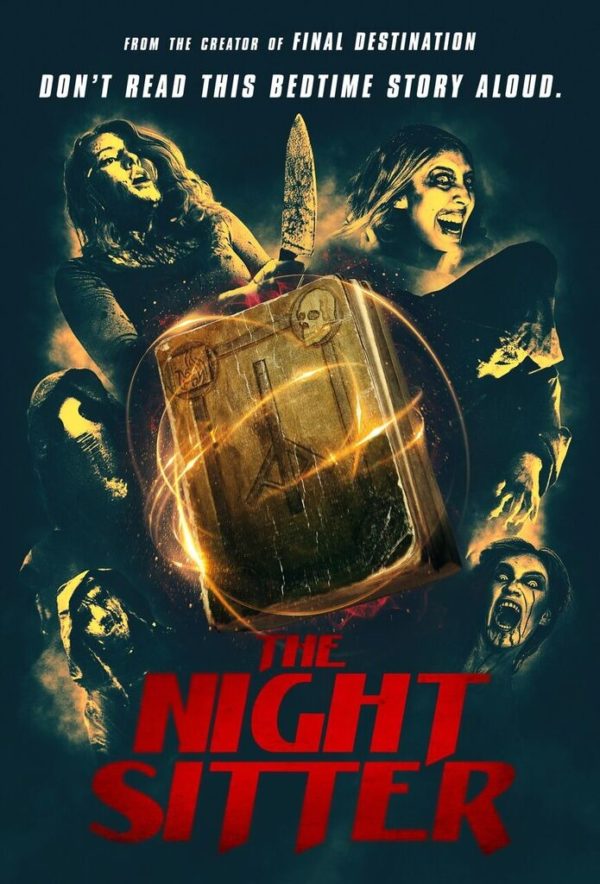 A con artist poses as a babysitter to steal from a wealthy occult enthusiast. One of the kids she’s sitting summons a trio of witches known as The Three Mothers. 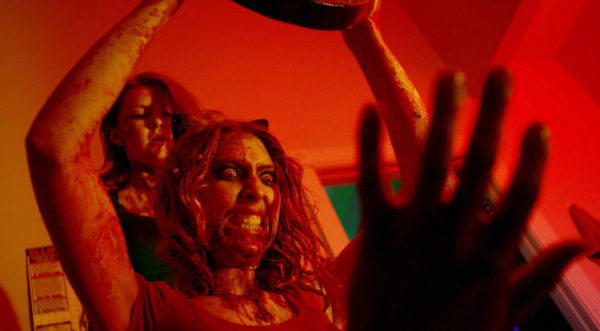 Crafting a solid horror-comedy isn’t as easy as one would think. Usually trying to blend vastly different genres into one perfect blend of insanity proves too much for most films. The Night Sitter sadly struggles to find its groove and only providing mild scares and even fewer laughs. Thankfully the film does boast one hell of a visual style in an attempt to make up for those shortcomings.

Directors Abiel Bruhn and John Rocco took the familiar “babysitter deals with spooky things” and puts it through Giallo filter. You can tell Dario Argento is an inspiration for this work, not only with the color palette of the film but with the witches plot and insane amount of gore. While those additions make The Night Sitter aesthetically pleasing, it doubles down on the lack of originality in the movie. When homaging, you never want to make the viewer turn off the current film and throw on a work of the artist you are referencing. I found myself wanting to do that often here, craving a film like Suspiria or Deep Red instead of this.

The Night Sitter follows “Amber,” a young woman taking a babysitting job while having more darker motives. She plans to rob the family of Kevin, the 13-year-old she’s watching, and walk away from this unscathed. Nothing could prepare her for three witches (even more Suspiria inspiration) that come during the night, brought on her by meddling and all the occult objects Kevin’s paranormal investigating father owns. This incident forces her and Kevin to form an unlikely bond in an attempt to banish the witches and make it through the evening alive.

One of the biggest highlights of the film is the commitment to using practical effects. While not always the easiest to use, especially on indie films, it’s terrific to see the production wanted to add that extra bit of flair with such significant effects. The blood runs like rivers, and you will see quite a few different ways to dispatch of the cannon fodder characters.

Setting the film at Christmas could’ve easily slipped into the holiday horror tropes, think Gingerdead Man or Santa’s Slay, but thankfully they never leaned on those tired gimmicks. Yes, you notice the holiday season, and there are some moments of cute Christmas horror. But it doesn’t weigh itself down trying to make an evil Santa or people eating presents. Any other script could’ve set this same story at Halloween, but the Christmas touch seems like the style of directors Abiel Bruhn and John Rocco.

On the negative side of things, the script does present some issues like lack of clear motives. As villains, I don’t know what drives The Three Witches to do these type of killings. They felt like a placeholder for any monster and didn’t have any real reason to be in the film. Again, glad it wasn’t some generic Christmas monster but adding a bit more to their story could’ve allowed for more engagement. Same goes with the character of Amber. Elyse Dufour does great with playing the role, but she’s given very little to work with in terms of fleshing Amber out.

Christmas came early this year, and while The Night Sitter isn’t the exact gift you asked for, it serves its purpose. The movie is no lump of coal, but more like those socks that you get every year, it’s just there to fill up space.

Are you craving some holiday escape in the middle of summer? Want a quick and painless horror movie? Then The Night Sitter will efficiently serve you well.