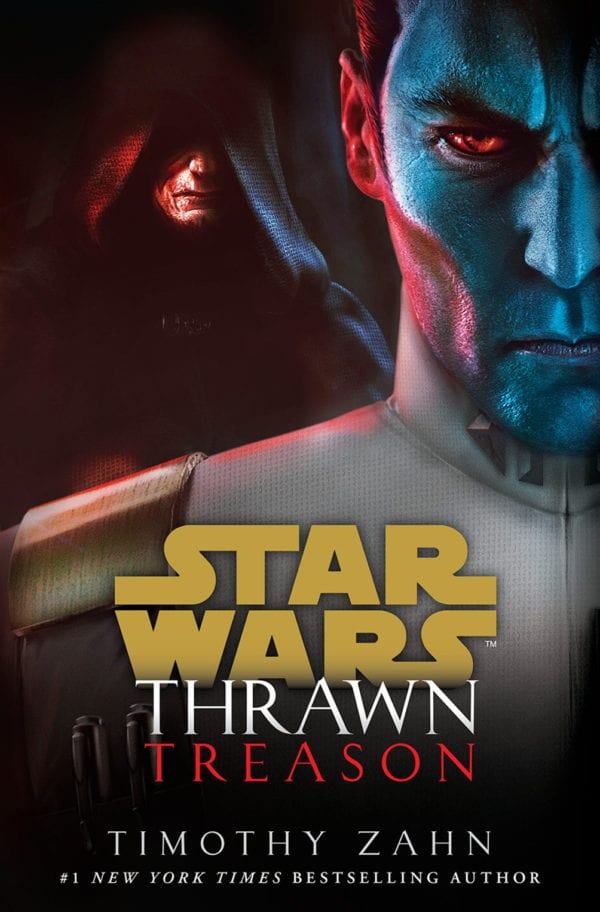 Timothy Zahn’s return to the galaxy far, far away with his latest novel, Star Wars: Thrawn – Treason, tells a fairly compelling tale involving the Grand Admiral that serves as a close to the trilogy of new Thrawn books. Zahn’s characters are interesting as he presents a unique mystery for them to solve, but while the book is engaging and keeps the pages turning it doesn’t tie up all the loose ends completely. It’s still a satisfying conclusion to the trilogy with some solid characterization of Thrawn and the supporting characters, but the story perhaps leaves too many threads dangling by the end.

Taking place in the latter half of Star Wars Rebels‘ final season, Grand Admiral Thrawn is called away from Lothal and pulled into the political battle between Grand Moff Tarkin and Director Krennic over control of the Death Star, which is still being constructed. After one of the Death Star’s supply lines faces a unique problem, what seems like a simple enough task for Thrawn to solve turns into something much more complex as a vast conspiracy is uncovered. Complicating matters further for Thrawn is the return of Eli Vanto and a Chiss warship, testing his loyalty to his people against the Empire.

Zahn does a pretty good job at the characterizations presented throughout the book. Thrawn is just as meticulous and cunning as he is in Zahn’s previous novels and Rebels. It’s interesting to see him toe the delicate line between helping his people and serving the Empire, especially under the watchful eye of Krennic’s loyal aide. The interactions between Thrawn, Eli, Admiral Ar’alani and other members of his crew are well written and show off the ways Thrawn inspires loyalty and admiration from his allies and scorn from his enemies.

What is interesting, though, is that Thrawn – Treason doesn’t have it’s title character as a POV character for much of the book compared to the previous instalments. Rather, the POVs mostly come from Eli, Thrawn’s second-in-command Commodore Faro and Krennic’s aide Ronan. Each one offers some interesting insight on Thrawn and how he’s viewed within the Imperial hierarchy, but the narrative loses something without his own perspective. Zahn still does well with the other characters, particularly with Eli Vanto as he returns from the Chiss Ascendancy. The difference in Eli between Thrawn and this book is great as Zahn shows how his overall confidence has grown, even going so far as to improvise some impressive lies while undercover, while also showcasing his worries with how the Chiss view him. Seeing how the Chiss work through his eyes is one of the most intriguing aspects to the book. The only downside is how there isn’t quite enough of him with the Chiss warship or of him and Thrawn together. On the other hand, though, Faro gets quite a lot more to do in the story as one of the more competent figures in the Imperial military. Zahn gives her a nice arc as she comes into her own as a commander while teetering the line between remaining loyal to Thrawn and to the Empire at large.

The other memorable perspective from Treason is Ronan, a complete loyalist to the Empire who thinks the world of Krennic so much that he even copies Krennic’s fashion sense with a log, flowing cape. Ronan’s zealotry makes for a good foil against Thrawn and Eli’s more analytical and logical minds as he does whatever he can to hinder Thrawn’s investigation. In fact, Ronan’s perspective is pretty humourous sometimes as he misjudges a situation or theorizes in the complete opposite direction. What is also interesting in Ronan is his disdain for the Imperial hierarchy and bureaucracy, With the sole exception of Krennic, Ronan hates how the politics in the Empire is played and has contempt for nearly every authority figure from Tarkin to even Emperor Palpatine himself. While some Star Wars material have seen Imperial officers often complain about the chain of command, it’s a refreshing and compelling aspect to see such a devoted Imperial follower have this view on the system.

The story moves along at a fairly good pace with some unique problems for Thrawn to face. Zahn merges two separate threads together fairly well as he also brings back the aggressive Grysks from Alliances back to complicate matters even further. There’s a good balance between the central mystery and the escalating tensions with the Chiss and Grysks where Zahn creates some exciting and imaginative space battles between a number of people. However, though one of the book’s central themes is that of loyalty, specifically Thrawn’s divided loyalty to his people or the Empire, it’s not quite as well examined as it could be. Perhaps it’s because of his lack of POV, but Thrawn’s loyalty never feels truly in question. There’s also a lack of closure for some plot points in this concluding chapter of this trilogy. That could be because of Thrawn’s fate in Rebels but even with knowing what lies ahead, some things just don’t feel finished, especially with a couple of the supporting characters. It still ends in a satisfying way, but not quite as strong as it could have been.

Despite the lack of closure on some story elements and a deeper examination of Thrawn’s loyalty, Thrawn – Treason is still a pretty enjoyable book from Zahn. The mystery and the complications that arise are engaging and the return of Eli as well as the introduction of new characters are served well. Even with some flaws, Zahn delivers a book that will have most fans of the Grand Admiral pleased.