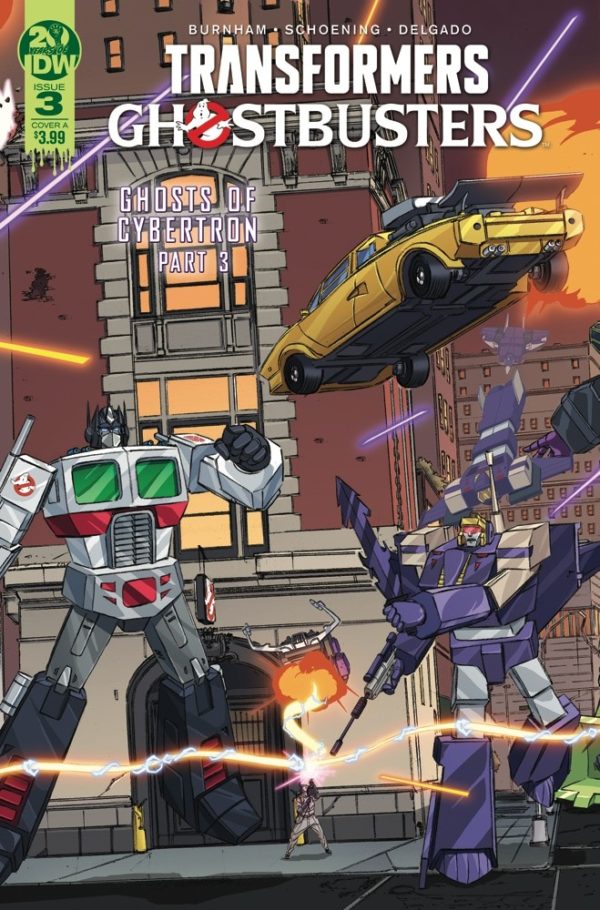 While the story doesn’t progress a whole lot, what makes the third issue an enjoyable page-turner are the relationships between the Ghostbusters and their alien guests. Ectotron and Janine had a pretty fun rapport at the start of the issue as Janine tried coming up with a simpler name for Ectotron (much to the relief of not only the Ghostbusters, but Optimus himself) while Peter and Starscream had some fun banter. Burnham is able to make each character sound distinctly like their counterparts in the original cartoon or films. Starscream in particular stands out among the cast with his sarcastic comments, high opinion of himself and disdain for the humans. There’s a lot of neat character work done throughout the issue.

The biggest development to the story is the arrival of the big bot himself, Optimus Prime, to the Ghostbusters fire house. It’s pretty humourous and totally in line with the Transformers cartoon that Prime wound up being vandalized after he naively thought a New York City alleyway would be a good place for a nap. Burnham’s script balances the humour and character moments pretty well throughout the story. Even as the Ghostbusters and Ectotron attempt to catch a ghost, Burnham doesn’t lose sight of the lightheartedness or the little character beats. It also helps that he still makes this series easily accessible for anyone not fully familiar with either of these franchises. Nothing in Transformers/Ghostbusters so far requires extensive knowledge of both franchises history, offering just the right amount of basic information to catch any newcomers up to speed.

Dan Schoening’s art is once agin quite detailed. The imagery is clear during the big ghost-catching scene and Schoening does well with the figures on all the characters. especially on the Ghostbusters’ facial expressions. He also includes some subtle Easter Eggs to various Transformers and Ghostbusters stories here, such as the huge painting of Ghostbusters II‘s Vigo the Carpathian or all the graffiti on Prime’s body. Luis Antonio Delgado’s colours nicely compliment Schoening’s art, giving the visuals a very vibrant look and feel.

All in all, Transformers/Ghostbusters #3 is another solid entry into this miniseries. Not much may have happened in the overall story, but Burnham’s character work shines and Schoening and Delgado’s artwork is one of the most appealing aspect to the book. It should make any fan of Transformers and Ghostbusters very happy to see these characters crossover in such a fun and intriguing series.