While Transformers is known best for robots in disguise and the eternal battle between the Autobots and Decepticons, there are two names who have become synonymous with the franchise: Peter Cullen and Frank Welker, the original voice actors for Optimus Prime and Megatron. The two have had long careers within Transformers and have been so popular among fans Peter Cullen ended up playing Optimus in Michael Bay’s live action films with Welker returning as Megatron later in the franchise. The two also reprised their roles in an animated series for the first time in over 25 years with Transformers Prime. Needless to say, Transformers would not be the same without Cullen and Welker. 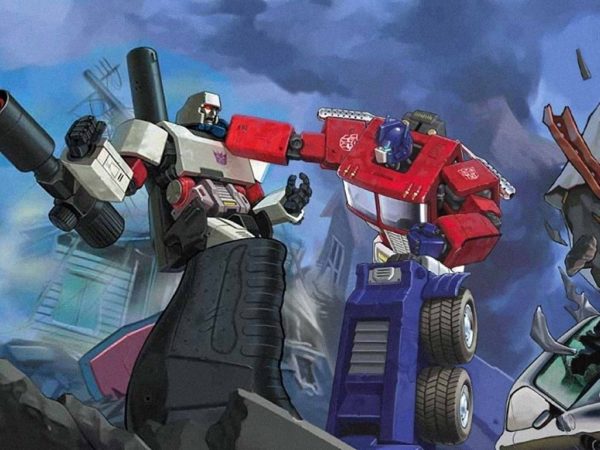 At the Fan Expo convention in Toronto, the pair held a panel for fans where they discussed their roles as Optimus Prime and Megatron and how they made the characters their own. They also took time to discuss some of their other famous roles, such as how Peter Cullen came up with his iconic sounds for the Predator and Welker as Scooby-Doo and Garfield.

“There’s something really special about going back to 1984,” Cullen said, “and for all those that do go back that far I can certainly say there is something dramatically special about that because we all went through the movie in 1986…” Here Cullen looked around awkwardly and gave a massive shrug, referring of course to Optimus Prime’s untimely death in Transformers: The Movie. “There are people here that were kids at that time as I suffered in another way. I went ‘What? I’m getting what on page 17? I’m not coming back?!'” 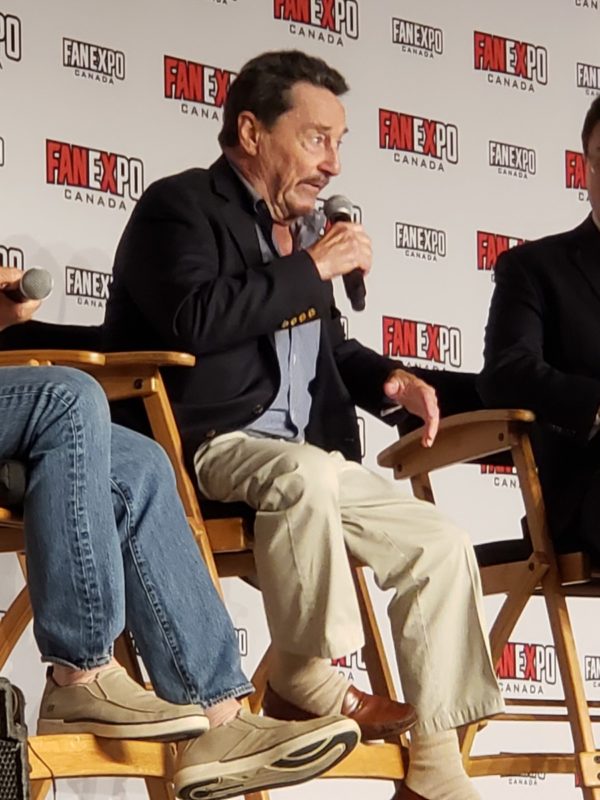 “Oh, Peter was so many different shades of blue and grey, you wouldn’t believe,” chirped Welker, referencing Optimus’ discolouration in his death scene. “I was shocked. I thought who am I going to fight? And then I turned into Galvatron so I was replaced.”

“There was a lot of sadness and a lot of joy that transpired over those years, but that was traumatic for me and a special part about that was to be brought back because it was so traumatic was one thing, but to get rid of me again I said ‘I’m getting tired of this!’ What do you have to do to be Optimus Prime? And then when Michael Bay’s movie came out I had to audition for the part I created. Hollywood! That’s the way of it.”

Despite the craziness of Cullen having to audition for the part that he originated, he did end up playing Optimus throughout all the live-action films. Welker puts it down to the massive campaigning from fans for Cullen to play Optimus since he is, as many have thought, the one true voice to Optimus Prime. “It’s important to remember,” said Welker, “that really you are the boss and the studios make the product for you so if you’re not happy with what you’re seeing and what you’re getting, let the studios know because they do it for you and we do it for you. You are so great keeping us in the loop. I mean, it was the internet where we originally found out there was you people out there. We didn’t get fan mail.” 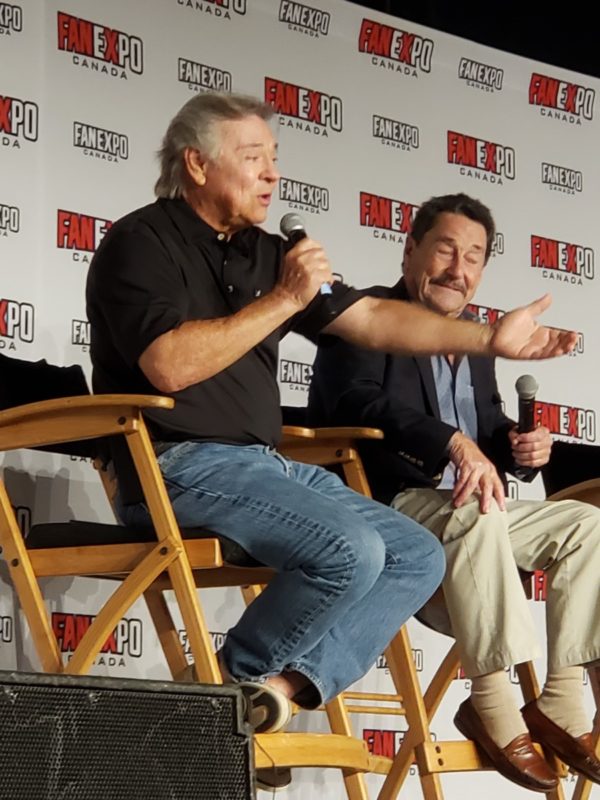 One thing that has changed with voice acting since they began their careers is the nature of recording sessions. Today, the norm for animated films or series is actors perform their lines in a booth individually, sometimes never even meeting their cast members, but this wasn’t always the case. “In the old days, a few years ago, most of the sessions we recorded with a full cast,” Welker said. “There were benefits to that. It was so much fun because we were all friends and would get to know each other and play off each other. Even during the down time you joke with each other so it was never boring. It was always fun.”

Cullen, however, revealed Welker was one to indulge in the fun a little too much during their recordings. “He was always the one to try to make me laugh during a very important silent period and his main ambition was to do it when I was drinking some water so it would come through my nose and my eyes and my ears,” Cullen said. Even with the light-hearted sabotage, Cullen also agreed there was more tangible about working with a full cast instead of in isolation from everybody else. “So many spontaneous things happen between actors and actors usually like to turn on other actors by being at their best. There’s always magnificent performances that take you by surprise, especially different from when you’re just reading a script at the very beginning and going through it and then actually taping it. The performance levels are sometimes sparkling and glorious and very funny.” 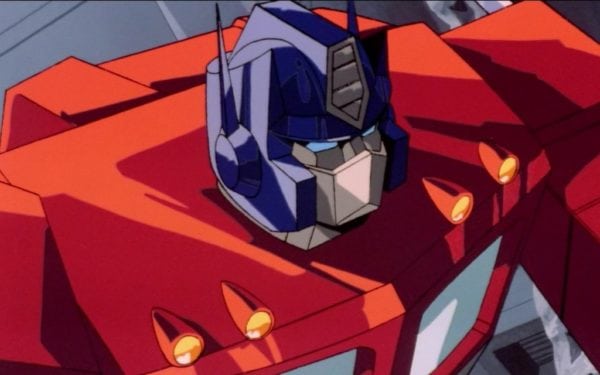 One of the most interesting stories behind the Transformers lore is the creation of Optimus Prime’s iconic voice. Cullen didn’t have to look too far for inspiration as he based Prime’s voice – as well as several of his characteristics – off his older brother Larry Cullen, a military veteran and personal hero to Peter. “My brother was a Marine. He’s passed, passed away several years ago. He served in Vietnam as an officer in the Marine Corps. K Company, 3rd Battalion, 5th Marines 1st,” Cullen told the audience. “He came home with a Bronze Star with a V and Purple Hearts and a changed man. He was always a great man, always my hero. Six inches taller, smarter, great athlete, professional football player, he taught at school, was a commercial airline pilot. He was just my hero. Nobody better than he was. When I told him the day I was going to audition for Optimus Prime, he asked ‘Where are you going, Pete?’ I said ‘I’m going to audition for truck’. He always thought my working in the theatrical world was questionable at the beginning, but I said ‘But Larry, he’s a hero truck!’

He said to me ‘Well Peter, if you’re going to be a hero be a real hero. Don’t be a Hollywood phony. Don’t go yelling and screaming and pretending you’re a tough guy and doing all that Hollywood crap. Be a real hero. Be strong enough to be gentle and be trustworthy and accountable and compassionate’. The tone of his voice was down here like this and he said ‘So be a real hero. Good luck’. So I went with that in mind and I got to the audition and looked at the page and there it was: ‘My name is Optimus Prime, leader of the Autobots from the planet Cybertron’. I could have easily just as said ‘My name is Larry Cullen. K Company, 3rd Battalion, 5th Marines’ and it just came out. I read the whole page and by the time I got to the bottom I said ‘whoa, I’ve never heard that before. Thank you, Larry’ and I walked out and a week later I got the job.” 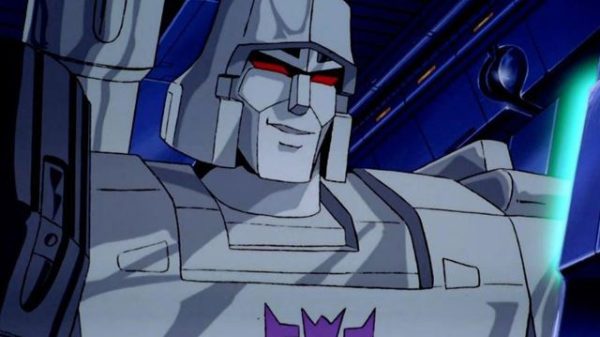 Unlike Cullen’s inspiration, Welker had to create Megatron’s iconic voice all by himself. He may not have had a direct person to play off of, but he did have a lifetime of making up voices and sounds that he used to think of Megatron’s raspy and intimidating voice. “Because all my life I made noises, sounds and impressions, I’ve always had this weird cave voice that was multiple sounds,” Welker explained. “I tried to make a bunch of voices at the same time. So I thought maybe I could use a little of that and put some sort of Barry White bass to it and kind of combine those into: I am Megatron, leader of the Decepticons!”

The conversation eventually turned towards the future of the Transformers franchise, particularly the live-action films. Beginning in 2007 with Michael Bay directing, several of the Transformers films have succeeded at the box office, but have also been largely derided by critics and fans. It’s a common consensus among Transformers fans that Bay, Paramount and Hasbro strayed too far from what made Transformers great as the films lack the tone and feel of the what was most adored from the original cartoon series as well as its various reinterpretations. Even characters like Optimus Prime feel quite dissimilar to their original counterparts with their characteristics and certainly their appearances. However, the one thing that has seemingly changed the course for the film franchise is the spin-off film Bumblebee. 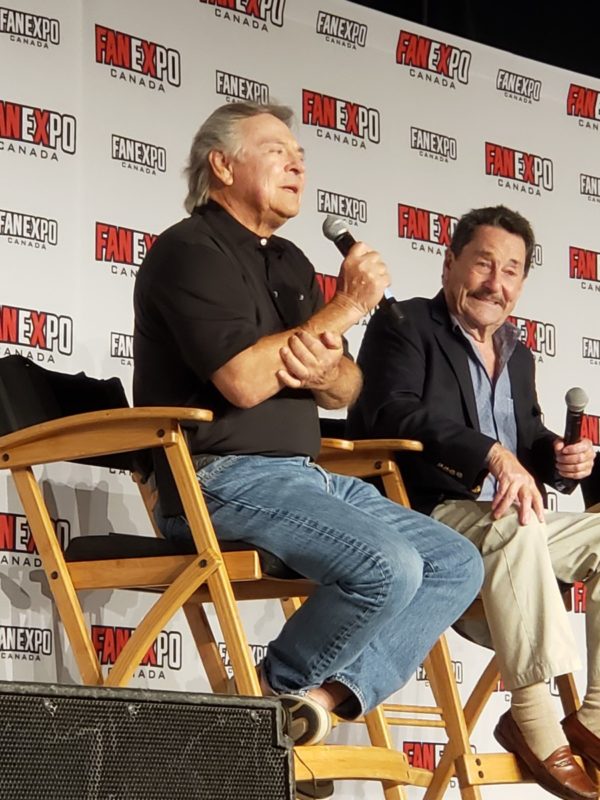 Bumblebee, which was directed by Travis Knight instead of Michael Bay, delivered the same type of feel from Generation 1 as it focused more on its characters than it did explosions. While it didn’t make a ton of money at the box office compared to some of its predecessors, it earned a lot of goodwill from fans for utilizing Generation 1 so heavily in look and feel with its heartfelt story. IT did so well in that regard that Paramount revealed the film will act as a soft reboot for the franchise with future films following that formula. This was something that made both Cullen and Welker quite happy to hear even if they don’t know the full particulars of what the films have in store.

“I’m really happy they’re going back to Generation 1 and that sense of feeling,” Cullen said. “This is our family. Generation Oners, we all have such great, fond memories of that and we’re like a family. I think the more that’s expressed to the powers-that-be at Paramount Pictures and Hasbro, the more they understand Generation 1 is the heart and soul of their industry will they become convinced that going back to the roots would be the answer for the continued success.” Welker elaborated further not just on the nostalgia of the Generation 1 series, but on the possibility of a reunion with the original cast.

“Another thing too that, along the same lines we’re talking about, we’re hoping – we’ve heard rumours but you never know – would be to have the G1 characters and voices from the originals because a lot of us are still around and can do those voices. We’re hoping that maybe Hasbro or Paramount would put out a full-length feature animated version so you’d see that whole beautiful family. That’s the hope so let them know if that’s interesting to you, but really the franchise will continue on but in what shape we don’t know.” If a live-action or full-length animated film featuring Cullen, Welker and the rest of the cast sounds appealing to you, do as the Decepticon leader suggests and make some noise!

Do you hope to see more of Cullen and Welker in future Transformers media? What are some of your other favourite roles of theirs and what would you like to see from the Transformers franchise? Let us know below and at @flickeringmyth…