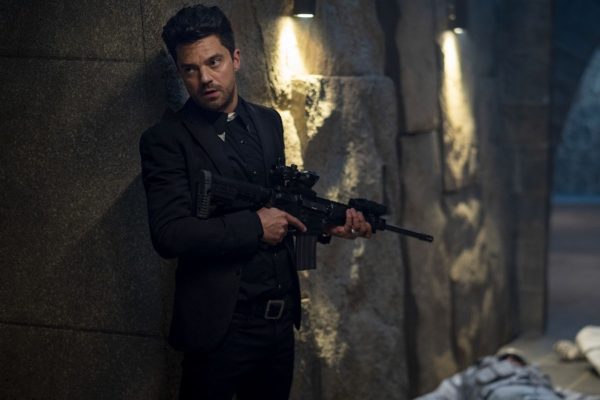 Rarely do you get four minute fight scenes with classical backing tracks which segue into swing guitar, before pulling back to reveal bodies piled high and slow motion bloodletting aplenty. Neither is it common for an automated meat slicer with foreskin removal adaptions to set the tone as slithers of man flap are repeatedly removed from a hapless victim. Counterpoint that gruesome spectacle with renditions of Irish standards while an angel feather floats down from on high and you get the picture for episode three. Challenging sells the whole enterprise short as we bounce between drama, black comedy and pathos before sidestepping into revulsion for a change.

As Jesse sets foot over the threshold to meet Jesus De Sade there is a hallucinogenic quality which implies debauchery, defilement and unsavoury activities for those willing to pay. Behind each door whips are being cracked, pleasure or pain emits from between the cracks whilst others just get their picture taken. On the other side of the world a blonde Tulip O’Hare wages war with bed pans and fists flying, before a Rorschach test gives her another option to explore. Herr Starr meanwhile indulges in superficial matters injecting some much needed levity into proceedings, quizzing those closest to him on matters of vanity. Pip Torrens might have been ill-served of late regarding screen time but himself and Julie Ann Emery’s Featherstone continue making essential contributions nonetheless. 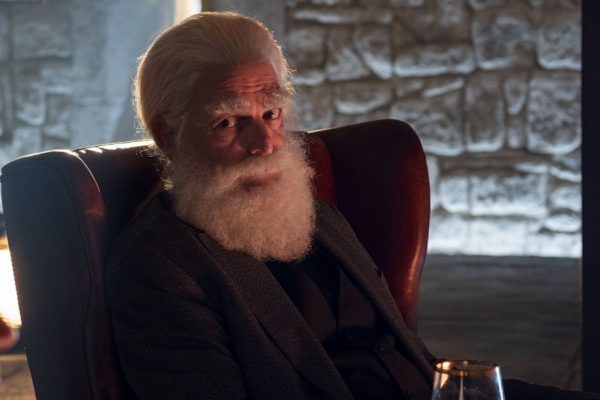 Elsewhere a maudlin Cassidy is racked by guilt which throws open the doors to a chunk of back story depicting an Ireland in turmoil during the Easter uprising of 1916. This period flashback gives a hint of the reasons behind Cassidy’s emotional trauma, whilst exploring the repercussions of those lost during the battle to end England’s occupancy. As one of two subconscious sequences in episode three it proves invaluable at imbuing depth and a sense of reality. Something which Preacher demands when hellhound cowboys and disfigured unfortunates are walking this earth.

Paired up and passing through they may be but conversation is thin on the ground. Aside from segues into a roadside diner which end badly, our odd couple fail to have a deep and meaningful about anything of worth. However with Bensonhurst looming for Cassidy, God looking on in his Dalmatian onesie and Jesse flying back business class it feels like a confrontation is definitely on the cards very soon.