Spider-Man has been one of the most popular superheroes in the comic book industry since his creation in 1962, resonating so much in pop culture that mainstream audiences turn up in droves to see his films. Over the last 18 years, Spidey has appeared in 8 films of his own, 11 if you include his appearances in Captain America: Civil War and the last two Avengers, with each appearance gaining anywhere from a decent box office earning to dominating cinemas for a lengthy period of time. Even after so many films, the wallcrawler’s latest adventure, Spider-Man: Far From Home, has become the highest-grossing Spider-Man film by crossing the billion dollar threshold not even a month after its release.

There have been a lot of great – or, rather, amazing – moments throughout Spider-Man’s cinematic adventures. This list covers what I think to be the most amazing scenes in each Spider-Man film, ranging from fights with supervillains, emotional performances, thematic significance or all of the above.  Needless to say, he’s definitely got some of the most memorable and awesome moments in the superhero film genre. So let’s swing in and discuss the most amazing scenes in the Spider-Man franchise. 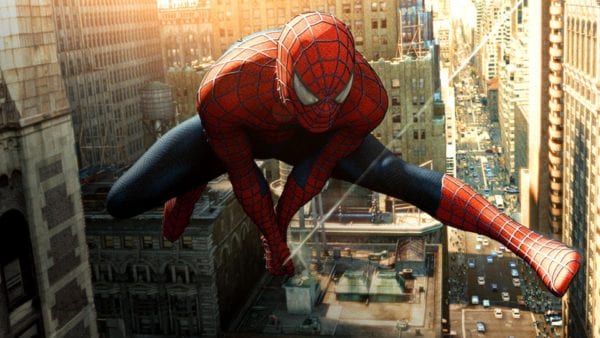 Spider-Man’s first foray into live-action feature film came in 2002’s Spider-Man with Tobey Maguire portraying the webslinger and Sam Raimi directing. Spider-Man was a huge success and praised by both audiences and critics. It broke the box office record at the time for the amount of money it earned in its opening weekend, a title it kept for several years. Many even place Spider-Man as the reason for the growth of the modern superhero film genre for its serious and entertaining take on the Marvel fan-favourite.

After wishing to see Spidey brought to the big screen for so much of my childhood, Spider-Man was a great experience for me and was one of my favourite films throughout high school. It had a lot of awesome moments, from the seminal ‘with great power comes great responsibility’ scene, the fights, the focus on Peter Parker as a relatable figure, even the way Spider-Man swung through New York City. There are so many good parts to Spider-Man, but the best moment comes towards the end.

After learning Spider-Man’s secret identity the Green Goblin has kidnapped Mary Jane Watson and taken her to the Queensboro Bridge, where he also takes a tram car full of children hostage as he forces Spidey to make a terrible choice: either save MJ or the group of innocent kids. Raimi does a variation of the infamous issue Spider-Man #121, where Goblin killed Gwen Stacy from atop a bridge. Rather than ending in a tragic disaster like that issue though, Spider-Man saves both MJ and the kids while making his own safety secondary as he cannot defend himself against Goblin’s attacks for fear of dropping the tram car everyone is loaded onto. It’s not until a group of civilians who have been watching help fend off Goblin that Spidey is able to rescue everyone. It’s a scene that speaks to Spider-Man’s selflessness and determination in the face of one of his most sadistic foes.

As much as I love Spider-Man, Spider-Man 2 is the better film and is still considered by many to be one of the best comic book films of all time. The return of Spidey to the big screen brought a new villain to life in Doctor Octopus, one of Spider-Man’s oldest and most recognizable enemies. While there are many stand-out scenes in the sequel, none matched the intense fight Spider-Man and Doc Ock had atop a speeding train throughout New York.

One of the great aspects about Spider-Man 2‘s train sequence is how it mixes so much practical effects and CGI, such as Spider-Man being pushed through the train’s window or Doc Ock ripping through the doors. Even just beyond that, the way Spidey moves and swings as the fight takes him on top, inside, on the side of and below the train is insane. The choreography really improved from the previous film as Spidey has to fight against a villain with four extra limbs and showcases how much of a physical threat Doc Ock is. Even with everything going on at a fairly fast pace, the action is never a confusing mesh of imagery as Spidey and Doc Ock move all around the train. It’s a very smooth and easy to follow set piece and thanks to the blend of practical and special effects the fight’s visuals still hold up to today’s standards and is even better than some of the film’s in the MCU.

Its ending is a little cheesy, but also rather endearing as Spidey saved everyone on the train but at the cost of his secret identity to dozens of people. However, instead of selling him out the people actually show gratitude and give him back his mask. Given how badly Spidey is treated by the Daily Bugle, cops or some citizens, it’s definitely nice to see some of his goodwill paid off.