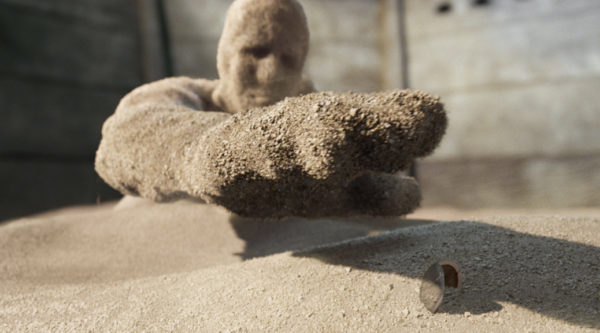 I’m going to be honest. I hate Spider-Man 3. It was perhaps the first real disappointment I had coming out of a theatre, especially after the high of Spider-Man 2. From the studio meddling, doing an injustice to its villains, stilted performances to some pretty corny scenes, it didn’t match the previous film’s feel at all.

If I had to pick my favourite scene from the film, however, it wouldn’t be emo-Peter strutting down the street or the jazz number that seems to come out of Anchorman, but the creation of Sandman. The visual effects in this sequence are actually pretty stunning as Flint Marko slowly begins to materialize himself from sand, especially the beginning of the scene as it focuses on one moving grain of sand before zooming out to show the millions that now make up his body. The strength of the scene comes in its wordless execution as Flint silently sees what he’s become and tries to obtain the picture of his daughter, willing himself back together to help her. What also elevates the scene is Christopher Young’s evocative score that hints at Spider-Man composer Danny Elfman’s style. It’s a pure Sam Raimi scene that makes you feel for the villain. It’s just too bad the rest of the film couldn’t be like this.

So this is a bit of a cheat since it’s three scenes in one, but the thematic through-line makes it one of the strongest parts of The Amazing Spider-Man. In this rebooted film, we see the traditional Spider-Man origin, albeit skewed, of Peter Parker having the chance to prevent a robbery but letting it slide only for the robber to fatally shoot Peter’s Uncle Ben moments later. That’s the moment Peter recognizes he can do so much more with his newfound powers and help people, but in The Amazing Spider-Man he at first uses his abilities to hunt down Uncle Ben’s killer.

Meanwhile in his search, Peter has been making a connection with Gwen Stacey and goes to her home for dinner. It turns pretty awkward though when her father, a police captain with the NYPD, voices his disapproval of Spider-Man’s tactics. When Peter tries to speak in his defense, he learns from Captain Stacey that his actions interfered in an ongoing police investigation where Spidey assaulted an undercover cop and, from what Stacey has put together himself, is out on some revenge quest since all the people Spider-Man has targeted share similar physical attributes. It’s a well acted scene from Andrew Garfield and Dennis Leary as they argue over the table and Garfield in particular sells the moment where he realizes Stacey may be right. The look on his face at the dawning realization that he may not be acting as selflessly and heroically as he thought speaks more than words can say.

It leads to a pretty great moment where Peter reveals his secret to Gwen. Garfield and Emma Stone share excellent chemistry together throughout both Amazing Spider-Man films, but Garfield again does well with a silent performance as he sees trouble off in the distance and puts the needs of others above his time with Gwen. It’s a moment that shows how much of Stacey’s words he’s taken to heart as he races to save a bunch of people from The Lizard’s attack on a bridge, going so far as to take off his mask to comfort a scared child and encourage them to trust him and climb out of a vehicle. The thematic significance of these three scenes displays some excellent character development as it leads to the moment Peter truly starts to become Spider-Man. 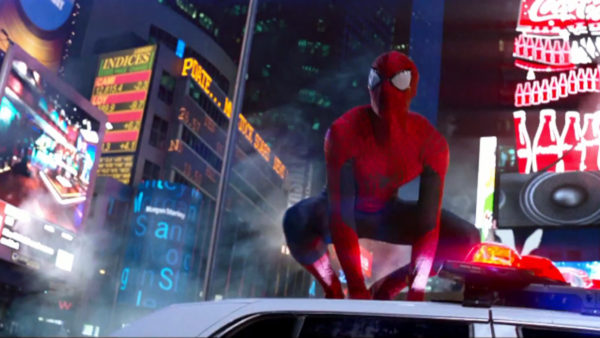 Though The Amazing Spider-Man 2 is a much weaker film than its predecessor, there are still some great moments within its story. The best one among them is Spider-Man’s battle with Electro in the middle of New York’s famed Times Square.

After Max Dillon’s accident turns him into a being capable of manipulating electricity, he stumbles into Times Square to feed and causes a fair amount of panic. Before police can do anything too drastic, Spider-Man shows up and attempts to calm Max down. It shows how deep Spidey’s compassion runs as he tries to help Max and understand what happened to him, but it’s not long before Max’s powers are triggered and causes the whole thing to spiral out of control, threatening the surrounding civilians who have gathered to watch. The fight sequence between Spidey and Electro is just another example of how adept Peter has become as Spider-Man, using both his classic Spider-Sense and intelligence to save numerous people from people electrocuted or getting crushed by cars. It also shows off how well Amazing Spider-Man 2 captures Spidey’s web-slinging abilities, from the quick jumps, swings and evasions he makes from Electro’s attacks. The way Spider-Man web-slings in this is honestly something neither the Raimi films or the current Marvel Cinematic Universe have done nearly as well as the two Amazing Spider-Man films.