We chat with Jeremy Nathan Tisser about Battlewake… 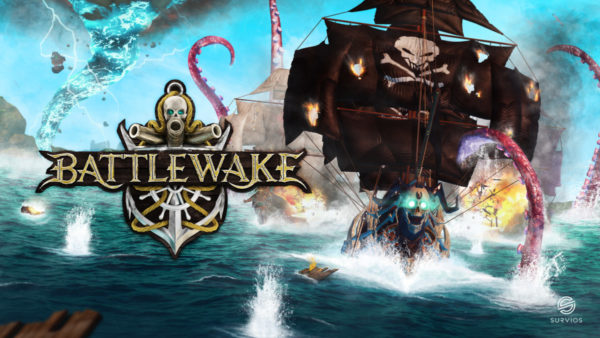 With titles under their belt such as Raw Data and Sprint Vector, virtual reality game developer and software publisher, Survios, has proven to be a force in the VR gameplay world. Last month they delighted gamers with the news that their upcoming ship battling multiplayer game, Battlewake would be released on PlayStation VR September 10th. The game was previewed at E3 back in June, but more info is now being released about the title, including the game’s composer Jeremy Nathan Tisser. Jeremy has quite the resume when it comes to the VR world, scoring games such as Zombies on the Holodeck, Wild Skies, Tricklab and the Survios hit Raw Data, which was the first VR game to break $1,000,000 in sales in a single month. His score for Raw Data in particular was unique in the fact that he combined his heavy metal background with orchestral flares, really enhancing the player’s gaming experience through the music. So it will be interesting to see what he brings to the table for Battlewake. Below is an exclusive interview with Jeremy discussing his work on the upcoming game.

How did you get become involved with the video game Battlewake?

I’ve been working with Survios since before the company’s inception, when it was still a student project at USC called Project Holodeck. I wrote the scores to their original games, Wild Skies and Zombies on the Holodeck. They then called me for Raw Data. In that time we’ve developed a solid working process, so they called me back for their next original IP, Battlewake.

How would you describe your score for Battlewake?

I would describe this particular score as a culmination of all my years playing in metal bands, combined with my years of studying proper orchestration and film scoring. I took my two biggest passions (orchestra and metal) and fused them together to create something new and unique. 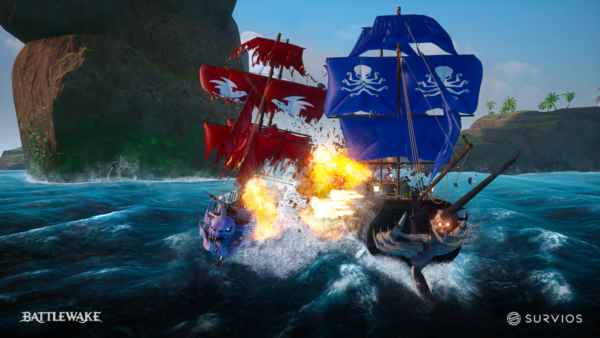 Battlewake is not your first VR game, you also scored the 2016 Survios game Raw Data. Is there a big difference between scoring regular projects vs. ones in VR? If so, can you explain?

Absolutely! In traditional film, you’re locked to the picture and the dialogue. Everything you write is in support of the actors’ performance and in service to the film. It’s a linear story, so the music remains linear and follows essentially a “guideline”, with timings, cuts and dialogue to sync up with.

In VR, we go the complete opposite direction. I draw my inspiration from the gameplay mechanics. That sounds strange, but I’ll explain. When I’m brought in to score these VR games, I’m often brought in at the very beginning, when the game is nothing more than a rough demo showcasing what the “fun” aspect will be. They first walk me through the concept art, and the vibe we want the player to feel, and then they throw me into the rough demo to start playing. I feel like for VR, I’m scoring the “experience” that I just had when I played the demo. The melodies and the energy are inspired by that initial sensation. Then the concept art and backstory inspire my instrument and rhythm choices. It’s quite a unique way to work that presents its own fair share of challenges, but I’m completely addicted to this process!

On VR games such as Battlewake what is your production process like? Do you have to wear the glasses while scoring to make sure everything is lining up properly?

I actually only get to play the game when I go into the office to meet with the production team. But beyond that, I work off of the story bible, concept art, playthrough videos, and whatever else they need to send me. Usually our meetings will be once every few weeks. In those meetings, I’ll come in with research I’ve found, or musical examples, or if I’ve begun writing, I’ll bring in different pieces of music to “show and tell” my creative director. At the end of the meeting, they’ll throw me into the HMD (head mounted display), where I’ll get to play the latest build of the game in order to get some fresh inspiration. 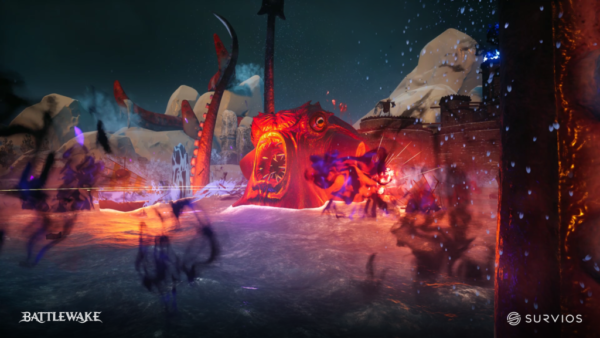 What did you do to prepare for Battlewake? Before starting a project like this do you prepare a palate of sounds you want to use?

My preparation for Battlewake was a unique one for me. It involved a ton of research and many discussions with the game’s producer Chris Donley, as well as the creative director James Iliff. Chris told me from the beginning he wanted big drums, big orchestra, and maybe some guitars. The word that kept getting thrown around was “fun”. We want the player to have a great time, and the game should always feel exciting. I knew immediately that I was going to have to start with percussion. So I got a couple of friends together, and we spent a day grooving on various instruments, and essentially creating our own percussion loops from which I could build my score upon. The next conversation with the team was about the look of the game. I don’t want to say too much because I’ll give away the various elements of the game. So I’ll say this. The score features a wide range of music from talking drums and taikos, to metal guitars and drums, to full orchestra. I even went so far as to hire my good friend and anthropologist Paul Parrett to be a “Cultural Consultant” on the score. I researched different Caribbean cultures and religions, some of which have no written information and require the knowledge of someone who has visited and studied the cultures directly and their traditions.

You have a very long history with heavy metal beginning with an internship in 2005 at Hopeless Records and helping out on the Warp Tour. Do you think that history influenced your “Battlewake” score?

OH yes! I bought myself a 9 string Ibanez electric guitar just for this game. I began listening to and playing metal on my drums around 1998 or 1999. The first three metal bands I fell in love with back then were Killswitch Engage, Meshuggah, and Slipknot. And the first two metal songs I taught myself to play on the drums were “Just Barely Breathing” by Killswitch Engage, and “Heretics Anthem” by Slipknot. Just Barely Breathing was the first time I ever heard crazy fast double kick drum like that, and I was immediately hooked! I’m still a huge KSE fan to this day! By the way, I was 12 years old in 1999…

On the Battlewake score, I experimented with polyrhythmic guitar patterns, polyrhythmic percussion grooves, fast string lines and runs (emulating guitar sweeps), soaring and epic melodies, and a lot of fast drums. It was quite exciting to finally draw on my years of inspiration and passion in metal and apply it to my favorite medium. 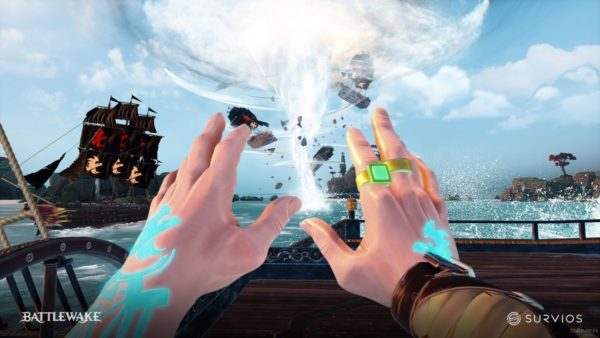 In your bio it says that you had a minor on screen role in La La Land. Can you discuss this and what that experience was like?

I did indeed! I was one of the four musicians playing in the blue truck in opening freeway musical number. Unfortunately, the take they chose had a darker shadow inside the truck, so you can’t see me TOO well, but if you look close, you’ll see a goofy guy smiling and playing a marching bass drum behind the timpanist. That goofy guy would be me! It was one of the more memorable experiences of my career. Where else in the world will you get to experience being shuttled onto a closed off freeway at 4 in the morning, and spend all day playing music with 50 dancers jumping on cars…again, ON A FREEWAY! It was crazy. But more than that, we all knew something really special was happening. I had the privilege of meeting Damien Chazelle (director) and Justin Hurwitz (composer) on the set. They were both so gracious and so humble. It was truly an honor to have played a small part in such a special project like that.

What would be your ultimate video game to score?

I honestly don’t have any specific game in mind that would be my dream game. For me, the ultimate game would be one that inspires and gives people something to remember. It would be a game that I have a great time playing, and an even better time creating the music. 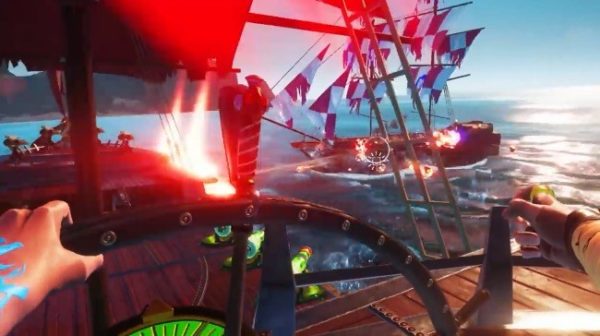 I’ve got two feature films coming out later this year. The first is called We Stand Corrected: Dannemora. It’s a documentary about the 2015 prison break from Clinton Correctional Facility in Dannemora, New York. For the film, I wrote about 70 minutes of score, utilizing a lot of synths, pianos, and strings. It’s quite different from Battlewake. However, I had the privilege of collaborating with the great Tommy Rogers on a song for the end credits. Tommy is the frontman for Grammy nominated metal band Between the Buried & Me. You’ll hear his vocals on the song. The second feature coming out is called Chameleon, from director Marcus Mizelle, and features a dark synth score, with Eru Matsumoto playing cello on top of the synth. I also scored an animated short film for Disney Animation Studios titled Hair Jitsu, which just finished a one-week run at the El Capitan Theater with The Lion King.

Many thanks to Jeremy Nathan Tisser  for taking the time for this interview.