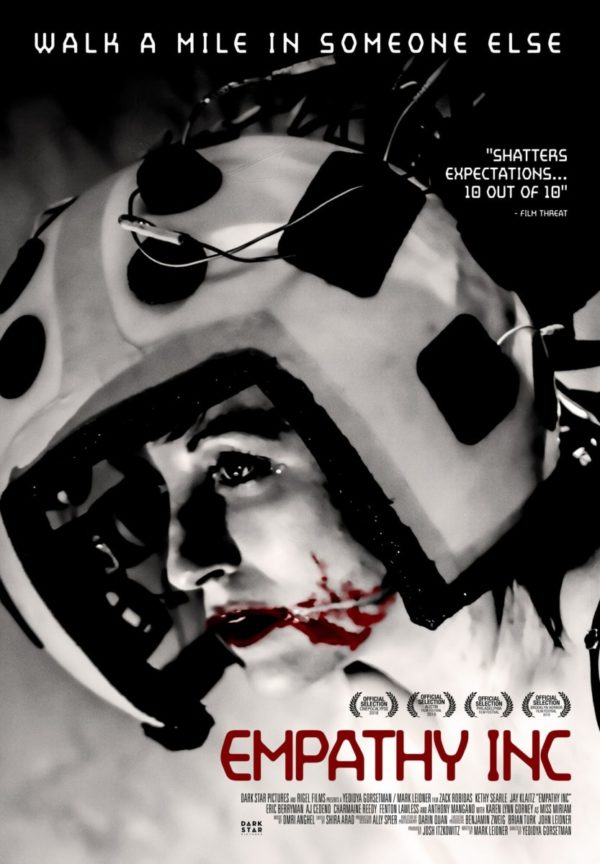 An investor in a VR startup discovers that the reality the company provides isn’t virtual.

Yedidya Gorsetman’s Empathy, Inc. evokes a breed of low-fi fantasy cut from Primer and Escape From Tomorrowland nanofibers. An earnest, monochromatic body-swapper that (assumedly) spends its largest budget percentage on craft services, yet fries brainwaves as science fiction exploits rampant societal classism. A film less concerned with the bells and whistles of “How’d It Get Made: Human Experiment Edition,” more vocally charged by virtuous pursuits of happiness – driven by greed, of course. It’s a story often told, but Gorsetman’s indie auteurism engages augmented evilness. Not the most dazzling tech offering, still worth assessing for the low-budget allure.

Corporate investor Joel (Zack Robidas) has just suffered a professional black eye after losing his job amidst financial scandal. Without work, his in-law’s estate becomes home until he and spouse Kathy (Jessica Searle) figure things out. It’s at a local bar where Joel runs into old friend Nicolaus (Eric Berryman), who proposes a lucrative tech opportunity. Too good to pass up, Joel sinks Kathy’s father’s nest egg into the hopeful endeavor dubbed “Empathy, Inc.” Wealthy clients pay for a virtual encounter where they’re reminded what it’s like to have nothing, living someone else’s life with no consequences…or so Joel thinks.

Mark Leidner pens a script that both ponders big questions and delivers straightforward thrills. Why would millionaires drop top-dollar to indulge a life less desirable? As Nicolaus bakes into his sales pitch, because those more fortunate don’t want to take their lifestyle comforts for granted. CEOs and stock market gurus log into a second life where they “remember” what it’s like to endure disrespect, or wander homeless, or wallow in filth. Aw, how sweet. Empathy, Inc. permits mortal appreciation and self-assurance, right? Enter the film’s conflict, hinged on violence and consequence as users experience out-of-body enlightenment at a price beyond dollar signs.

Black and white color removal services a Twilight Zone-esque vision rooted in disassociation from normalcy. Technology props made from bike helmets and cheap tubing appear believable without details highlighted, aiding in a sufficiently bare-bones production heightened by visual representation. Gorsetman understands how to hide bargain-bin designs while amplifying character performances merely by choosing grey filters. Such is a gamble in today’s 1080p, super-saturated world of hypercharged cinematography – especially for an indie. Credit where credit is due, it’s a choice that’s only ever beneficial. No gimmick; a tonal tweak that infects mood and temperament.

Joel’s downfall, rise, and inevitable re-downfall is a tragic character study, and Empathy, Inc. leans on performance-based provocation. More than effects-heavy competition might. Zack Robidas as Joel and Jay Klaitz as Empathy, Inc.’s inventor Lester are the film’s bellcows, while supporting roles exist to advance plot with varying command. I specifically mention both names above for a reason I won’t spoil. Empathy, Inc hides tricks up both sleeves. Exposed at the right time.

Robidas is an effective leading man who embraces paranoia but doesn’t beg sympathy while his house of cards comes tumbling down. Joel makes his mistakes, Joel suffers, and Joel’s happy ending bucks Hollywood trendiness. Klaitz, boorishly, provides the antithesis to Joel’s personality in the main character’s throes of passionate reclamation. Lester ever the schlubby scumbag with a loud mouth and brash attitude. Together, their chemistry ping-pongs back and forth, fighting against one another with enough presence to sell an otherwise angsty story of the 1% exploiting lower classes to a perverse degree.

Vagueness represents my only weapon, so I’ll leave you with this: Empathy, Inc. is a thought-provoking fantasy world about problems that loudly reverberate throughout today’s social ecosystem. Nothing new, but Yedidya Gorsetman proves a handyman DIY director who morphs restrictions into advantages. Enough to elevate this logged-in science fiction aggressor above lesser composed productions that’d expose cheaper qualities as distractions. A few strong performances do most the work, minimalism catches fire, and we’re left with an ickiness that lingers. Positive praise in my neck of the critical woods, mind you.