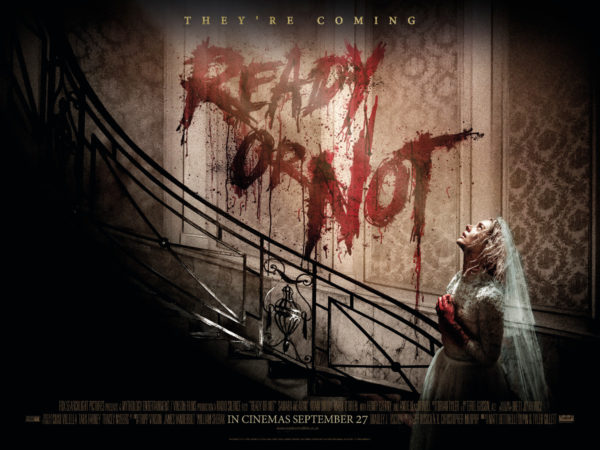 A bride has the wedding night from hell when she is thrust into a deadly game of hide and seek. 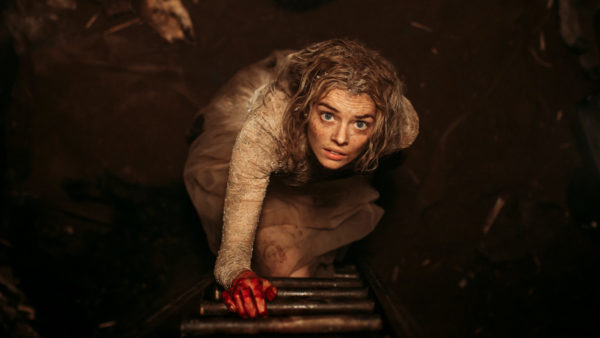 Families, right? One minute you’re happily marrying the love of your life, and the next you’re running desperately through his family mansion while your in-laws try to blow your head off. It’s just like when Nan loses at Scrabble on Christmas Day.

The above predicament, minus the Scrabble, is pretty much the exact experience of Grace (Samara Weaving) in the raucous, wry slasher Ready or Not. She has just married into the Le Domas clan of board game millionaires – they prefer “dominion” to “dynasty” apparently, according to Grace’s new husband Alex (Mark O’Brien). Grace is reassured by new mum-in-law Becky (Andie MacDowell) that she’s a part of the family, but the glowering face of matriarch Helene (Nicky Guadagni) gives her understandable pause for thought. Grace, we learn, is a foster child, who craves what she calls “a real, permanent family” and just wants to fit in. 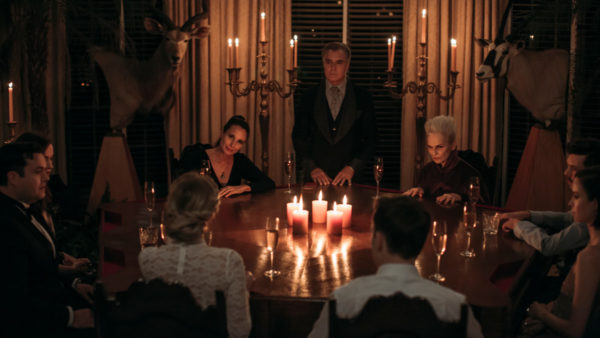 As part of an initiation ritual, she has to play a randomly selected game with her new family. Other married-in members of the Le Domases say they played chess and Old Maid, without really understanding why, and Grace draws the card marked ‘Hide and Seek’. She runs off to hide, concealing himself in a dumbwaiter, while the Le Domas family arm themselves with shotguns, pistols and crossbows. Unbeknownst to Grace, that particular card is different. The family now believe they must kill her before sunrise, or risk fatal consequences themselves.

If there’s a central theme running within the blood-soaked madness of Ready or Not, it’s that “the rich really are different”, as one character so eloquently puts it. This is a movie about the isolating effect of privilege and the suffocating nature of a family you can’t choose. Grace is set adrift in a world of opulence in the face of a ritual that positions her, the outsider, as an implicit threat to the established order. These people cling to tradition out of a desperation to maintain their status at the top of the societal heap. In this world, wealth is a sickness, transforming people into monsters. It’s basically the opposite of what Downton Abbey is selling. 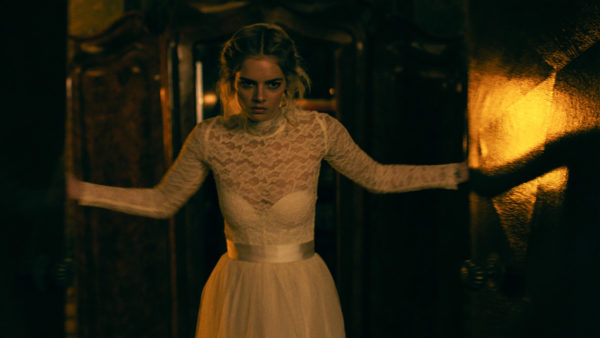 Weaving is simply terrific as the woman at the centre of the action – a ‘final girl’ who immediately joins the pantheon of the genre’s great heroines. It’s a performance of vigour, physicality and commitment that becomes something truly special through her exquisite comic timing and megawatt charisma. Whether she’s laugh-snorting in the face of absurd bloodshed or unleashing a blood-curdling scream of anguish, desperation and aggression as she brandishes a glinting knife, Weaving is never anything other than a dynamite screen presence. It helps that she’s surrounded by a very colourful cast, with Guadagni’s psychotic, axe-wielding pensioner and Melanie Scrofano’s underachieving, coke-sniffing daughter the most memorable of the bunch.

Directing duo Matt Bettinelli-Olpin and Tyler Gillett certainly put Weaving through the wringer. The film is a lean, mean odyssey of blood, with some seriously gnarly violence – watch out for a ‘Chekhov’s Nail’ scene to rival A Quiet Place – and a vicious sense of humour. Guy Busick and R. Christopher Murphy’s sharp script is regularly inflected with gallows comedy, carried off beautifully by Weaving, as the archaic tradition of the Le Domas family clashes with the very modern energy of their new addition. 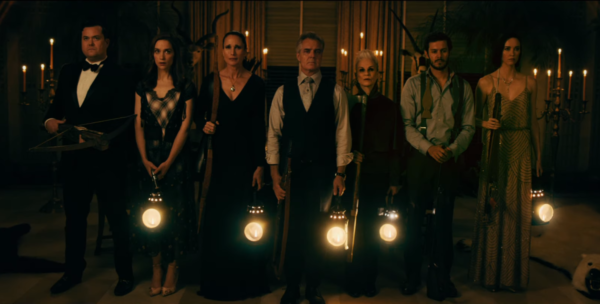 The film is unafraid to pepper its tense set pieces with moments of comedy and, often, the gags are so offbeat and left-field that they make the audience even more unbalanced. This is most notably true when it comes to the final reel, which delivers an entirely unexpected and wildly enjoyable conclusion to a story that seems primed for a far more generic climax. It’s a final flourish that will stay with viewers for days and puts the perfect cherry on the top of a delightfully gory cake.

Ready or Not is a straight-up horror crowd-pleaser. It plays to the rafters with its punch-the-air gore and casts Weaving as one of the most rootable protagonists in the genre’s recent past. So get ready to play, because here it comes.