Paul Bettany and Elizabeth Olsen have further teased what to expect from the upcoming Marvel TV show, WandaVision, and offers some clarity on the sitcom/marvel epic approach. 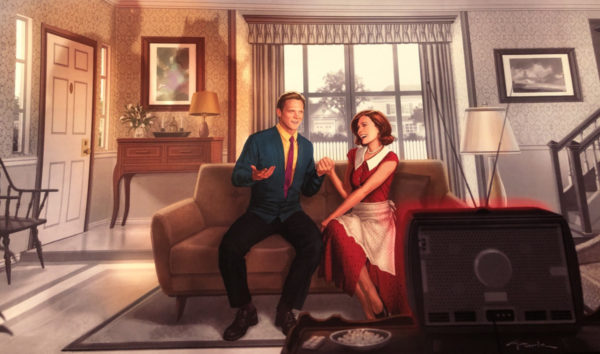 In a recent interview with Entertainment Weekly, Bettany and Olsen discussed the transition between the sitcom and regular MCU epic movie we have come to expect from Marvel Studios:

“That’s where it starts. and then it sort of snowballs into an epic Marvel movie that you’ve grown to know or love,” Bettany said. “I think there’s been a real progression in the characters and the relationship and to actually be able to spend the time on that. Each time there’s more exciting stuff for us to do… The scripts we are reading so far are so bonkers.”

“It is a mash-up between American sitcoms throughout the decades and Marvel film with these characters,” Olsen added.

Whether you are for or against this mashup, this is a unique and original approach in the Marvel Cinematic Universe, using already established superheroes.

What do you think of the mashup of sitcom and Marvel epic? Are you looking forward to WandaVision? Let us know in the comments below or tweet us @flickeringmyth…

WandaVision will take place after Avengers: Endgame and stars Bettany and Olsen reprising their roles as Vision and Scarlet Witch, Teyonah Parris (Empire) as a now-adult version of Monica Rambeau from Captain Marvel, Kat Dennings and Randall Park reprising their Thor and Ant-Man and the Wasp roles as Darcy Lewis and Agent Jimmy Woo, along with Kathryn Hahn in an as-yet unrevealed role.