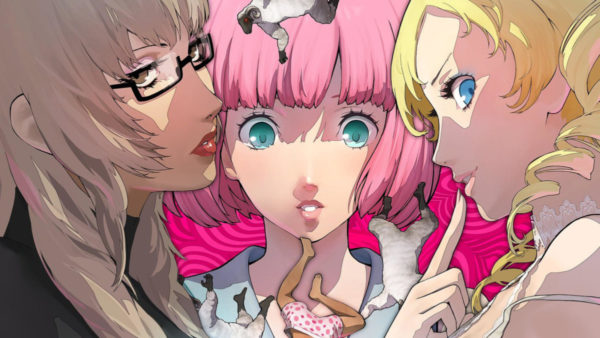 Atlus’ stridently singular puzzle-platformer Catherine passed many by – this critic included – upon its original 2011 release, but anything beyond a cursory glance at the game’s cover art or gameplay confirmed it to be an eye-catching offering, both in spite and because of its controversy.

Ever since its release, Catherine is a game that has opened up a dialogue – sometimes constructive, often not – about the utility of sexuality in video games, and how a scantily-clad female character need not be strictly fan service. And while Atlus’ game walks a very fine line with its depiction of women and especially its engagement with LGBTQ themes, it does offer up an oft-mature stab at what could so easily have been another also-ran visual novel for the anime crowd.

Eight years on the world has changed a lot, and Atlus’ attempt to refine their game for 2019 is sure to be met with both praise and derision from various quarters, though for both newcomers and old fans, the new Full Body treatment is largely an entrancingly strange experience.

Take one look at the game, though, and you might consider it a title you’d be embarrassed to show your auntie; indeed, much of the story focuses on impossibly cute, comically proportioned young women skating around in skimpy clothing. But Catherine is mercifully more self-aware than it initially lets on, surprisingly.

The story takes place over nine days, with commitment-phobic 32-year-old protagonist Vincent getting the five-year-itch with his girlfriend Katherine, who is eager to get married and settle down. After a bleary night, Vincent finds himself embarking on an affair with the gorgeous titular love interest, while also considering the attentions of the adorable, pink-haired Rin, a new addition for Full Body who throws another spanner in the works. Haunted by nightmares that reflect his waking anxiety, while hearing horror stories of similarly beleaguered young men dying in their sleep, will he find a way to course-correct his existence? 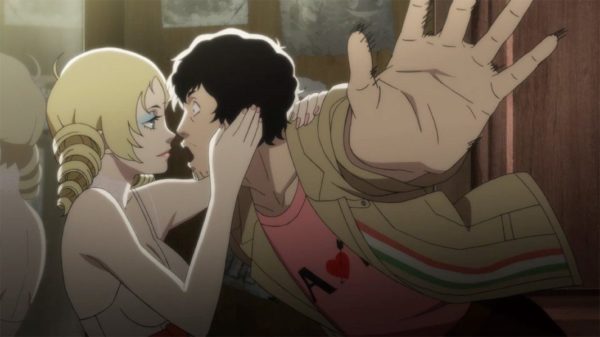 Knowing precious little of Catherine‘s story before diving in, I firmly expected a video game confessional decrying the man-child’s inability to just live his life with pesky people who dare love him holding him back. But thankfully the through-line is more complex and rewarding than that, arguably serving as a paean to feminine independence – while admittedly taking a sometimes-questionable path there.

The game makes no attempt to disguise Vincent’s terrible behaviour – embodied through a good/bad bar adjusted according to your behaviours and answers – though presumably for fear of alienating players, the story is perhaps a little too generously sympathetic to him at times.

The general tenor of the game is so tongue-in-cheek – even featuring random “drink facts” as you sink beers with your pals at the local bar – that it’s easy to give Atlus the benefit of the doubt for the most part. For major chunks of the game both Vincent and his lovers act so cartoonishly stupid it’s tough to know what we’re supposed to take away from it – is it, as it appears to be, a parody of overwrought relationships dramas? What it isn’t, mercifully, is either outwardly misogynistic or misandrist.

The storytelling gets zero points for subtlety, however, so if you’re craving genuinely robust writing there are far better games to tackle. It shamelessly wears its emotions on its sleeve to the point of comedy, anime-style, but is effective in its own charmingly weird way.

And at this point I should finally talk about the actual gameplay of this thing, which is focused on several-dozen nightmarish platforming levels sprinkled throughout the story. Players must ascend cascades of blocks, pushing and pulling them in order to find a safe route to the summit, while blocks beneath you will periodically drop into the abyss below to ensure a sense of urgency. 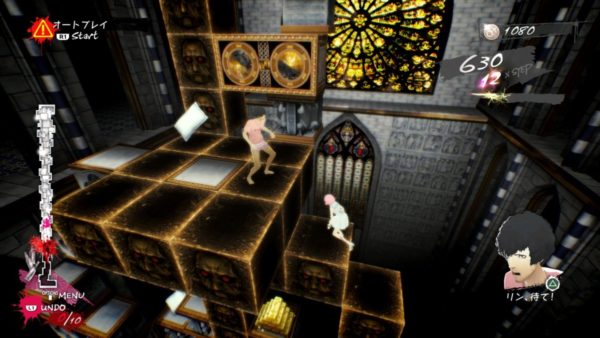 Throughout the game new types of blocks are introduced – ice, weighted, bombs and so on – while each of the game’s nine days concludes with a surreal boss fight, a sprint-of-sorts where you need to ascend fast in order to avoid being squashed, cleaved in half or otherwise brutalised by one of the grotesque manifestations of Vincent’s fears. In-between stages you’re able to learn new techniques and purchase pick-ups – like drinks which allow you to jump two blocks at a time – while talking to some of your fellow suffering men, who appear in the form of sheep, because of course they do.

Between days, you’re usually inundated with a solid wealth of story, through both cut-scenes and hub-world sections, the latter allowing you to waltz around your local bar, chatting to both your friends and the colorful cast of characters within, while also checking your phone for messages. Pro-tip; drinking excessively at the bar will buff Vincent’s speed when climbing.

The platforming element was relatively divisive with both fans and critics upon the game’s initial release, its deceptive depth praised but the high degree of difficulty deemed offputting to less-skilled (or less-patient) players. To Atlus’ credit, they’ve taken this fully on-board and made Full Body a wholly more accessible game; an easier Safety difficulty has been included where the platforming is auto-completed by the CPU, allowing players to simply soak in the story should they wish.

Handily, players on other difficulties are also able to strategically employ auto-play to their advantage; if you get stuck on a section, select “retry” and the CPU will complete the preceding entirety of the puzzle under perfect conditions before handing control back to you, giving you the best shot possible of reaching the top.

It’s a shame there’s no option to skip this CPU-controlled perlude, though, because it can become rather numbing if you use it multiple times during one level, but it is nevertheless an admirable compromise for those struggling with some of the trickier sequences. And even with these facilities available, it’s still enormously rewarding observing your own skills improving, especially once the game throws a few oppressive difficulty spikes at you. 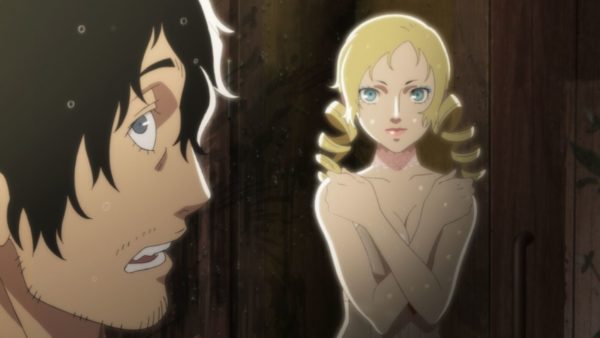 Presentationally, Full Body is a handsome remaster that’s clearly far above and beyond a merely satisfactory touch-up job. The new visuals are crisp and detailed, while Studio 4 °C has reportedly added more than 20 new anime cutscenes to the game, all of which are gorgeous to behold no matter your esteem – or lack thereof – for the medium.

Aurally, the vocal performances contribute significantly to the game’s unexpected ability to be taken vaguely seriously as a piece of relationship fiction, with Troy Baker in particular lending a certain weathered humanity to Vincent that elevates him behind pure cartoonish dickishness. And this is all backed by a terrifically dynamic musical score from Shoji Meguro – complete with original compositions created for this new version of the game.

But as remarkable a package as this all might be, the game isn’t without its issues. First and foremost, repetition makes even the game’s fairly svelte 10-hour playthrough feel occasionally like a slog. The central gameplay isn’t varied at all, and though the platforming does introduce new wrinkles, the loop of platforming, bar-hopping, chatting and sitting through 20 minutes of story feels a little more transparent than it probably should.

This repetition also transpires occasionally into the core gameplay itself, with sound effects being shamelessly recycled with an infuriating regularity; you’ll never want to hear the word “edge” spoken aloud ever again after beating the game. Technical issues do abound occasionally, particularly when scaling around a block, which often results in the camera awkwardly and violently jutting around, as though it doesn’t know how to give the player the correct perspective. And save points could probably be a little more frequent, because in true Atlus style, there’s no auto-saving here.

Catherine: Full Body is an indelicate yet thoughtful game, a messy and at-times eyebrow-raising precis on gender and relationships, but a unique and worthwhile experience all the same. For newbies, its eccentric appeal to open-minded players will be evident within minutes of playing, while the polished remaster and solid suite of extra features – including both local and online multiplayer modes – should make it a persuasive revisit for those who played the original on release. 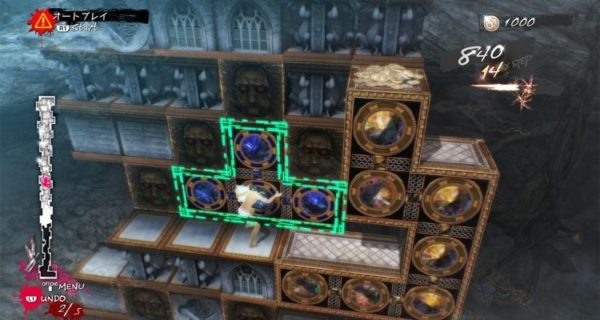 Cons:
– The gameplay loop is rather repetitive.
– Some minor camera issues.
– The story’s tone may irritate some, if not offend.