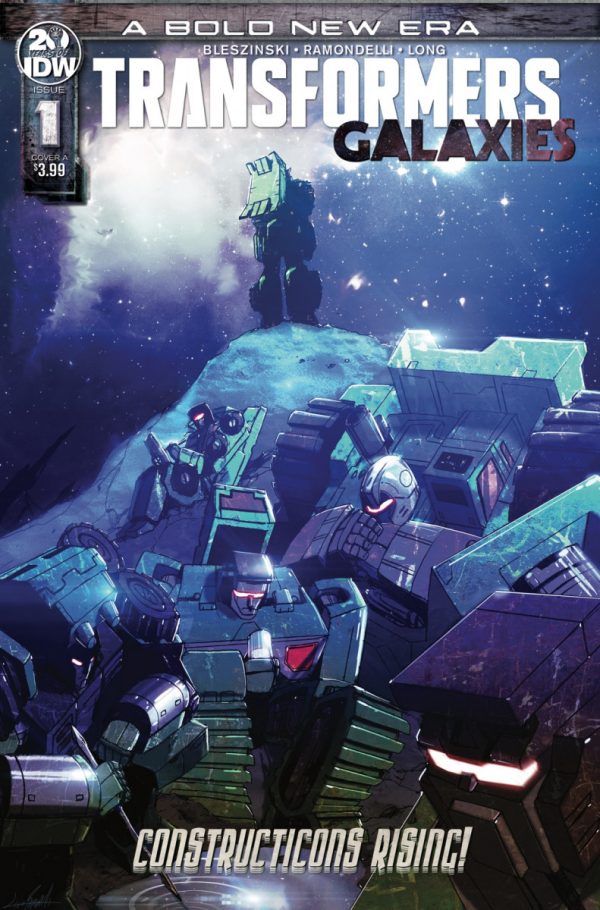 IDW’s Transformers series expands with the first issue of Transformers: Galaxies, a spin-off focusing on some other bots, both well-known and not, in the new continuity Brian Ruckley has set in pre-war Cybertron. For the first arc of the new series, Tyler Bleszinski explores the origins of the Constructicons and their transformation into Devastator in a fairly interesting tale that doesn’t really play with common tropes. Transformers: Galaxies #1 is an intriguing and promising start to the spin-off series.

The story takes place during two points in time, one just after Cybertron’s previous war and the other at a point in time in the future (presumably during or just before the start of the main series) where the Constructicons have essentially been exiled from their home planet for unknown reasons. Bleszinski’s use of a non-linear format is interesting for the very first issue, but he does well with it and makes the jumps between times clear. The only confusing element to the timeline is how the past sequences take place shortly after the War of the Threefold Spark, a conflict that hasn’t been fully explained in either this issue or the main Transformers series despite its significance for much of Cybertron’s current society. Despite that, Bleszinski focuses more on the Constructicons’ role in rebuilding Cybertron and how they view their purpose.

The Constructicons themselves are presented in a bit of a new light. They are pretty young bots at the chronologically earliest point in time and just want to rebuild the planet, often using unorthodox methods that don’t quite jive with Wheeljack’s way of thinking yet work splendidly. Out of the group Hook and Scrapper get the main focus of the issue, especially in the future where Hook is particularly bitter about their current situation and whatever forced them off Cybertron. Bleszinski does a good enough job individualizing them, though apart from Hook and Scrapper each one somewhat sounds the same, though he still puts his own mark on them and their history. In a bit of a change from typical continuity, the Constructicons weren’t built to merge in Devastator, but were rather chosen by the Enigma of Combination to become one. It’s a nice change that opens up some room into how each of the Constructicons feel about merging and the power it gives them – a power they apparently can only keep as long as they remain united in their purpose, which they seemingly no longer are. Already Bleszinski has planted several seeds for how and why the group will join the soon-to-be Decepticons and form Devastator again.

This also marks the first time we’ve seen the oft-mentioned Termagex in a significant supporting role rather than one brief scene. Bleszinski writes Termagex well and paints her as a supportive and thought-provoking teacher for the Constructicons and others, though there are also hints to a more manipulative side. The fact she withheld some vital information on what the Enigma can do, or what combining together would truly mean for the Constructicons, could be some early indicators she’s perhaps not as benevolent as everyone else seems to believe. Another interesting aspect to the issue is how Bleszinski uses some material from IDW’s previous continuity here, such as the Enigma of Combination (as well as its same physical look) and the fact that Cybertron once had a combiner that went mad from the process. Given that these two aspects played significant parts in the old continuity, its not much of a surprise to see them resurface, though they’re still quite similar to what came before.

On the art front, longtime Transformers artist Livio Ramondelli returns to tell the Constructicons’ origins and provides some very nice and clear images. It can sometimes be difficult to tell the Constructicons apart, but there’s one moment where Ramondelli lines up each of their unique faces to their names to make it less confusing to readers as to who is speaking. His character work offers a few nice subtleties in how each of the Constructicons carry themselves differently while his colours offer a nice palette to the story. In the past where the Constructicons are united and clear in their purpose, the colours are often bright and vibrant among their rebuilding efforts, yet this moment in time is contrasted by the future scenes where it is dark and moody despite the bright lights of a city they worked together to build. Ramondelli’s art is an interesting inversion of how the group view themselves during their prime and exile.

Bleszinski does well with the Constructicons’ beginnings, though right now the only ones who stand out are Hook and Scrapper. While there are some familiar elements to the story, Bleszinski places enough of his own mark on the characters to make this new take an intriguing one while planting some compelling seeds for future issues. The art from Ramondelli is quite good both in its visuals and thematic connections to the group. Transformers: Galaxies #1 is a nice start to the spin-off that doesn’t feel like an unneeded part of IDW’s main series.