After the death of their daughter, a married couple move to Venice after the husband takes up a job restoring an old cathedral. As they settle into their new home, the couple meets a clairvoyant who warns them they are in imminent danger. All the while a mysterious red-hooded figure stalks the city’s canals. 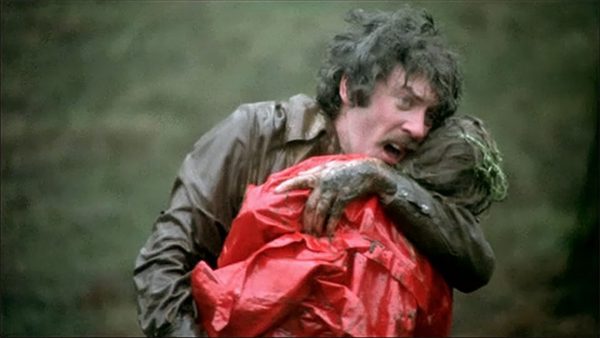 To say that the late Nicolas Roeg one of the most creative and unique voices in British cinema would be an understatement. Throughout his long varied career, Roeg created an idiosyncratic style of directing that regardless of which genre he worked in, it could be guaranteed that the results would be something memorable and, on numerous occasions, highly controversial. Thankfully for us, one such genre that Roeg dabbled in was horror, bringing us today’s film; Don’t Look Now, a film that true to form, might not be to everyone’s liking but is nonetheless a memorable experience.

While featuring a plot that deals with the supernatural, psychics, and a serial killer, Don’t Look Now is not a horror film in any conventional sense. If anything, one could make the strong argument that is isn’t really a horror film. Instead, the film is a weighty drama about the burden of grief and how the sudden loss of a child impacts a once happy marriage. The story’s supernatural elements are portrayed in a very different fashion than we might expect to see in other similar films. Instead of flashy effects-heavy seance sequences, many of the psychic visions experienced by a blind clairvoyant being relayed through dialogue exchanges intercut with flashbacks in conjunction via the innovative editing.

The serial killer plot, which in of itself could make for a decent film, doesn’t factor into the main plot that much aside from suggestions that something is amiss in Venice, such as police boats blocking off canals and fishing something from the waters. It only really comes to the forefront when John (Donald Sutherland) is questioned by a police inspector and even then it’s still downplayed somewhat. It’s a curious and rather novel approach, although its effectiveness depends heavily on viewers individual tastes and preferences. Some might find it just a tad too slow on the uptake to be entertaining or scary, while others might appreciate the more subtle “lurking in the background” approach that relies heavily on themes and recurring motifs rather than outright scares.

While the film might not work, in my view, as entertainment, on a technical and artistic level the film is a triumph. The cinematography is exemplary throughout with Roeg’s camera managing to capture Venice in both its spectacular tourist-friendly beauty while making it seem sinister and unwelcoming with the back alleys and canals being potential death traps to the unsuspecting and unlucky. The cinematography is also creative in the way that Roeg uses the colour red as a recurring motif throughout the film with it serving a double meaning as both a reminder of past tragedy and a warning of future danger. What stands out most about the film, as with many of Roeg’s films, is in his novel approach to editing. Working in with his editor Graeme Clifford, Roeg edits his scenes in a deliberately fragmented fashion that plays around with time and place often as a means, as in one infamous scene, telling us about where the character’s relationships stand in a much more creative and innovative fashion that tells us more than an exchange of dialogue might. The fragmented and distorted nature of the editing also creates a dizzying and often nauseous atmosphere that leaves us confused and disorientated, such as in the film’s infamously dark ending which shockingly reveals that some things have never been quite what seemed to be.

Cast in the lead roles of John and Laura Baxter, we have the brilliant pairing of Donald Sutherland and Julie Christie, both of whom excel in their roles, with excellent on-screen chemistry and natural charm making their characters’ marriage feel authentic making for a likeable and engaging pair of protagonists. The chemistry between the two is especially helpful (and the source of some controversy) when it comes to the scene that this is probably the reason why this film is infamous; the sex scene. Much has been said about the sex scene between Sutherland and Christie, the vast majority of it being sleazy tabloid gossip about whether or not they actually had sex (they didn’t). This tabloid obsession is especially irritating because it has unfortunately overshadowed what is a rather creative and brilliant sequence.

It’s a sequence that, while graphic, doesn’t for one moment come across as sleazy or exploitative. Instead, thanks to the brilliant staging, cinematography and, most importantly, the editing, which intercuts the pair making love and them getting dressed afterwards, is crucial to its impact. The scene shows that the couple is finally beginning to recover from their personal loss and, at least in my interpretation, have begun to fall in love with each other all over again. Don’t Look Now is a difficult film to rate. The slow and subtle approach that it takes with its story certainly holds it back a piece of entertainment with the film being much more of a domestic drama than an out and out horror film. However, on an artistic level, the film is a triumph, with the fantastic cinematography and innovative editing, along with a unique approach to its familiar story turning what might have been a conventional supernatural horror into something altogether more original. Check this one out if you’re curious.