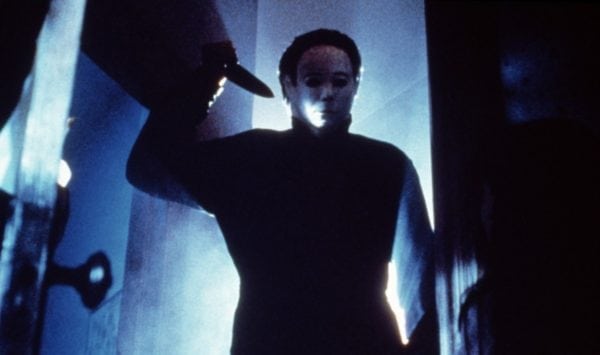 Though celebrated as the long-awaited return of franchise icon Michael Myers after a seven-year sabbatical, the fourth (third, really) Halloween movie sees the series take an irretrievable free-fall into truly generic slasher film territory. With a script cobbled together in just 11 days before an impending writer’s strike, it’s a most baffling, belated cash-grab of a horror sequel.

Quickly undoing the fairly concrete nature of Myers’ death in Halloween II, killing Laurie Strode off for good measure and making her young daughter Jamie Lloyd the new target of Myers’ knife, it’s a thrown-together sequel with a thick air of desperation about it.

The worst thing about this movie, though, is that from the horrid exposition dump opening onward, it’s just an intensely boring, dull offering. Director Dwight H. Little seems to realise it, too, splicing in naff kinda-nightmare sequences throughout the first act in order to compensate for how long it actually takes Myers to start doing anything.

Elsewhere, the script indulges in risible melodrama as adult protagonist and Jamie’s foster sister Rachel (Ellie Cornell) gets caught in a love triangle with her boyfriend and a young sexpot. An inexplicable amount of screen time is devoted to this dynamic for no other reason than to pad the movie out, which given its mere 88 minute runtime is pretty lousy.

The niece angle isn’t the smoothest way to continue the series without Jamie Lee Curtis, but Danielle Harris does give a credible performance as young Jamie, selling the sheer terror Michael poses with gusto in even the film’s sillier moments. It’s the ever-wonderful Donald Pleasence, though, who easily steals the show once again as Dr. Loomis, bringing a ton of unwarranted gravitas to the movie and letting you really feel his frustrated determination to stop Michael.

Sadly most of the movie’s characters are either dull teens, goofy weirdos or inane rednecks, forced to spout cheesy, portentous dialogue and be killed off in methods not interesting even in the schlocky sense. It helps not at all that Little’s direction is flat as a pancake and Curtiss Clayton’s spasmodic editing verges on incoherent at times, while creating infuriatingly long chasms of time where Myers is kept off-screen.

Musically it also does nothing particularly fresh or memorable, with regular franchise composer Alan Howarth mostly just dining out on John Carpenter’s original leitmotifs, which given Howarth’s unique work on the previous film is rather disappointing (if also thoroughly emblematic of the across-the-board low-effort production).

Halloween 4 gets a lot of praise for its ending, which is by turns comical and legitimately unsettling. Myers’ gunshot-induced plunge down a mine-shaft is rather silly, but the final rug-pull with Jamie inheriting Michael’s murderous tendencies is a genuinely shocking stinger, especially with Loomis’ instinctive response to blow her to hell. It’s a pretty perfect ending to a mostly rough-hewn movie, and probably should’ve ended the series (much like Halloween II should have, of course).

Michael Myers may return in the series’ fourth instalment, but the imagination and originality is mostly long gone.