In the wake of Joker’s success, Tom Jolliffe looks at similar cinematic examples of the disturbed outsider… 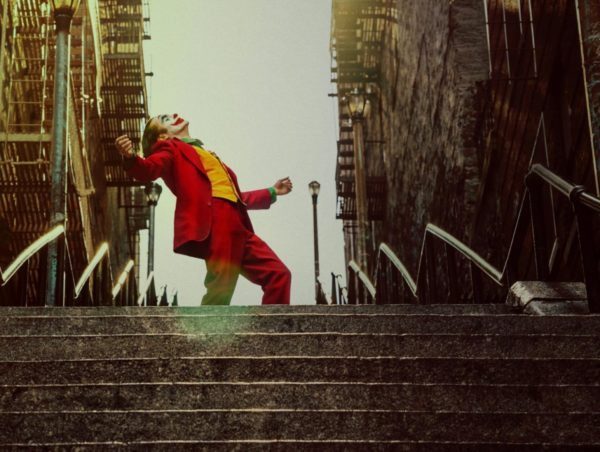 With a quarter billion in takings and counting, as well as divisive reviews, media attention up the wazoo, and a status (particularly among the 18-30 viewers) as a cinematic masterpiece, Joker’s depiction of disturbed isolation and disconnect from society was certainly interesting, and Joaquin Phoenix most certainly phenomenal, but it follows a well worn and fascinating cinematic path. There is something inherently interesting about the character who cannot connect with the world around him (particularly when it’s not merely ‘the villain’). Of course the most obvious film you might look at to compare, is one which directly influence Todd Phillips’ film, Taxi Driver but since that connection is well documented, I shall forgo that one.

Historically, cinema has a fairly routine equilibrium. It has a grounding. The protagonist is most often relatable at least, or perhaps heroic (dependant on your genre). It’s difficult to focus on a protagonist who might be sociopathic or psychopathic (or both). Maybe the distinction between reality and fantasy becomes blurred or even shattered. Aspects of that from The King of Comedy for example were repeated in Joker.

Lets look at a few other examples… 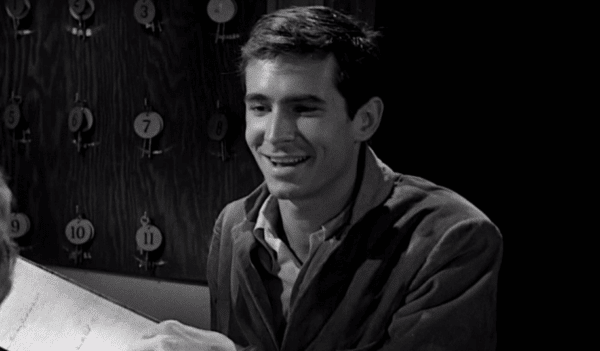 Master film-maker, Alfred Hitchcock shattered cinematic expectation in a tightly controlled, and disciplined Hollywood era with Psycho. A protagonist flip, midway was genius enough, but the introduction of Norman Bates gave cinema one of its most unassuming and unsettlingly creepy villains. As played by Anthony Perkins, Bates is the mild-mannered, amiable if odd Motel owner who looks after his bed-ridden mother. The infamous reveal of course is legendary but the total disconnection with reality and then looking back over the film and some of the finer subtleties in Perkins’ work really emphasise how well crafted the film and character are.

Jack has played his share of psychos. Lest we not forget his scenery chewing and brilliantly playful turn as the Clown Prince in Tim Burton’s Batman. There’s no subtlety or grounding there, but still, he gives his own memorable take. For more subtlety though you might look at the seemingly troubled but generally well intended, McMurphy in One Flew Over The Cuckoo’s Nest. He’s anti-establishment of course and rebellious but as beautifully unveiled, the more the film goes on, he’s unable exist out in free society. That constant need to bite back against a system, but an inability to really live outside the confides of an incarceration, McMurphy strives for a freedom and an escape he knows he can’t have.

That would lead us into Kubrick via Nicholson in The Shining. More overtly horror of course, Jack Torrance is regardless, an interesting character. There’s a simmering suggestion throughout of a lack of empathy, human warmth, to succumbing to dark thoughts and explosive anger. Whilst a dark spiritual invasion undoubtedly affects him, it’s a mind primed for the inception of homicidal thoughts. By the end he’s dragging an axe through snow, chasing down his young son. 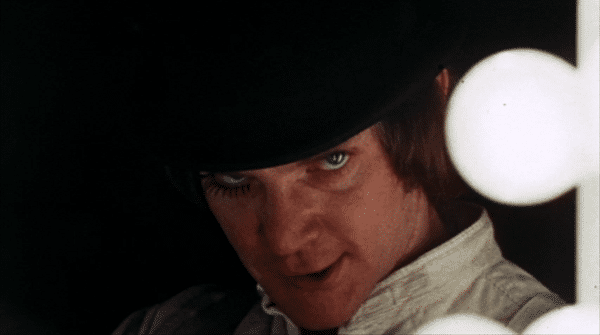 Sticking with Kubrick also brings us nicely to another controversial film deemed immoral by the press and a potential inciter. In fact it was banned initially too. A Clockwork Orange, a majestic masterpiece of exuberance with a disturbing approach to violence and a satirical sneer to societal expectations, rebellious youth, media and oppressive governments. Malcolm McDowell as Alex, a young gang leader with no empathy finds himself incarcerated and ‘reprogrammed’ to abhor violence and disturbing thoughts. 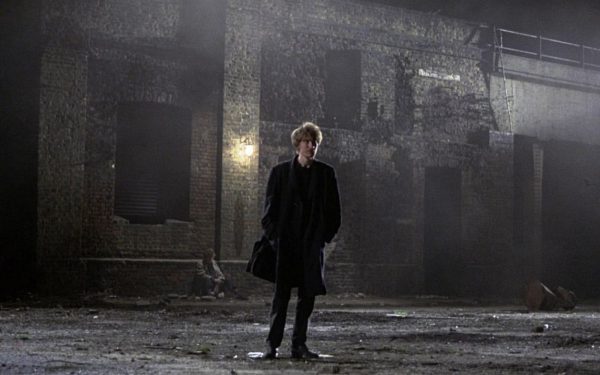 In a career of interestingly flawed, and authentic characters, Naked marked Leigh at his darkest and in a film that, whilst retaining a feeling of reality and his iconic kitchen sink drama, pushes as close to the realm of fantasy as he ever has. David Thewlis, flees the North after an aborted attempt at sexual assault and heads to London to seek out his ex-Girlfriend. Within 15 minutes of the film beginning we already know that Johnny, afflicted not only with acute physical symptoms (neuralgia) but psychological issues (not limited to narcissism, manic depression and obsessive behaviour) is disturbed. His brain cranks out thoughts in hyper speed, making him not only deeply intelligent, but uncontrolled, impulsive and emotionally unstable. It may only be an inability to control his own physical ailments that stop him lashing out more aggressively, more often. 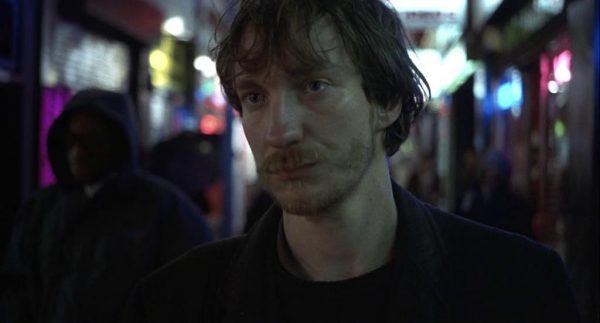 If Joker beautifully evoked the 70’s era depiction of the big American City at its most otherworldly (think those almost dreamlike rides through New York in Taxi Driver for example), then Naked does the same for London (and in particularly London by night). It’s a setting both familiar and cinematically alien thanks to Dick Pope’s wondrous cinematography. It also only acts to re-emphasise that Johnny exists in his own plane, such is his disconnect with the layperson (which is further driven home by a lot of his random encounters). He’s fascinated by fellow oddballs but still unable to really connect with anyone and if you like ambiguous endings, his chance of even just a temporary reprieve/salvation is left behind as he wanders off to whatever comes next. Thewlis too, it should be said is every bit as enthralling, if not more, than Phoenix as Fleck. 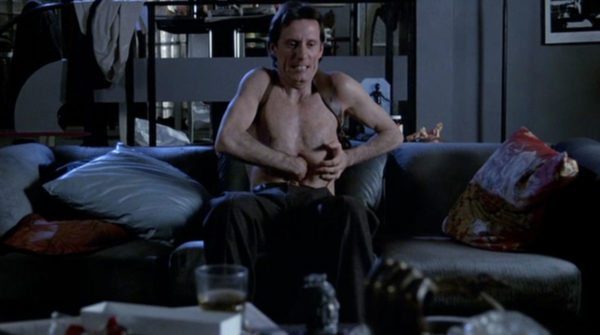 David Cronenberg has made a career out of portraying the alienated, or sociopathic. If there’s also a wry swipe at societal discord and media responsibility (or lack thereof) in Joker, then Cronenberg certainly winks intently at visual medias fascination with the macabre.

In Videodrome, Max, a heartless TV exec who strives to scrape lower and lower down the morality scale of entertainment, is most definitely a fascinating sociopath and, in more overtly horrific ways, loses his grip on reality. Max is the kind of guy who would kick Arthur Fleck down and then glorify his violent reactions back through his TV channel. He pulls the wings off flies, because it fascinates him to do so. If Fleck has nothing but the feeling of being shit on by every one above, Max is one of those above, but he’s equally devoid of an ability to connect as a human being to mainstream society. As Max finds himself progressively infected by Videodrome, suffering intense mental delusions, his reality is shattered. Again, Videodrome is a film many find odd but fascinating. It demands repeat viewing. It’s deliberately, playfully vague and leaves a lot of questions as to the reality within scenes. Regardless, it’s so insular, and enthralling, aided by a fiercely droning score, glorious cinematography and grotesque (but brilliant) visual effects. 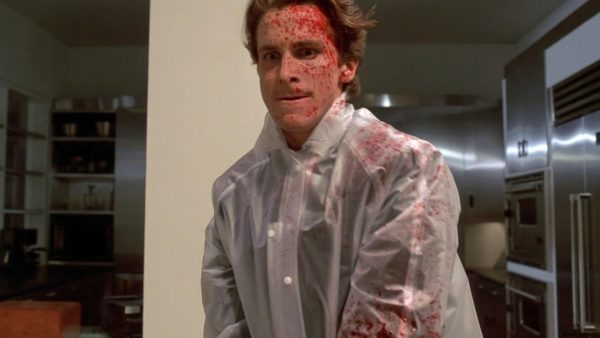 Two very cult films that amalgamate many aspects that we see in Joker are American Psycho and Fight Club. Aside from great central performances and a general playful dance with the reality of each piece, we have very distinctly deranged protagonists. Patrick Bateman, who lays his cards out from the beginning is a psychopath at worst and a sociopath at best. He despises people. He picks and chooses just when and who he will ‘act human’ for. He strives for material luxury, without particularly caring for any of it, he won’t deal with the less fortunate simply because he can get nothing out of them.

American Psycho is wry, darkly humorous and playful too. By the end, hooked into a majestic performance from Christian Bale, you’ll question how much of the violent explosions of murderous lust existed in Bateman’s mind and how many were real. 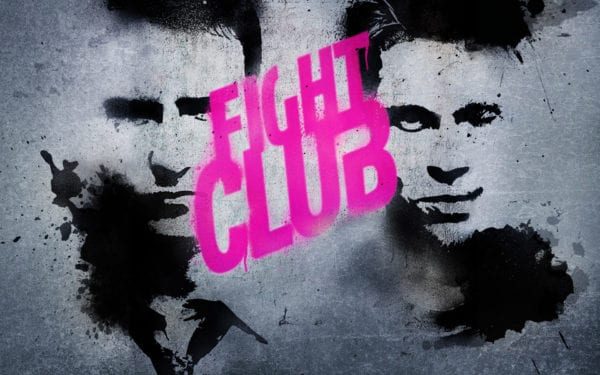 Fight Club of course has the marked difference in that our narrator, suffering a paranoid schizophrenic delusion has lead his audience one way, only to pull the rug out from us. Ed Norton’s ‘Narrator’ is a man living an ordinary 9-5 life, working to fund a material existence with shit he doesn’t want or need, and be among a society of people he despises. Connecting with outsiders and the rebellious, revolutionary Tyler Durden he becomes embroiled in an escalating plot to bring the whole societal system down. That is until we realise (and he finally twigs) that Durden is a figment of his imagination.

It’s not just men (although it mostly is)… 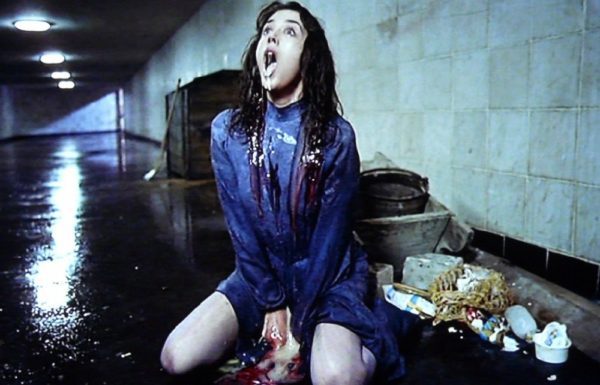 Check Possession for an exhilarating look at a mentally disturbed protagonist whose already fragile mentality is further afflicted by a strange creature. Like all of the above, it’s anchored by an exceptional central performance thanks to Isabelle Adjani which most famously includes an iconic subway sequence so raw, powerful and guttural that it will stick with you forever.

Margot Kidder, pre-Lois Lane was also superb in an early example of Brian De Palma’s horror prowess in Sisters and a great example of his love of Hitchcock. More recently, Natalie Portman’s gothic depiction of reality shattering breakdown in Black Swan was enthralling and a performance that hooks into you and doesn’t leave.