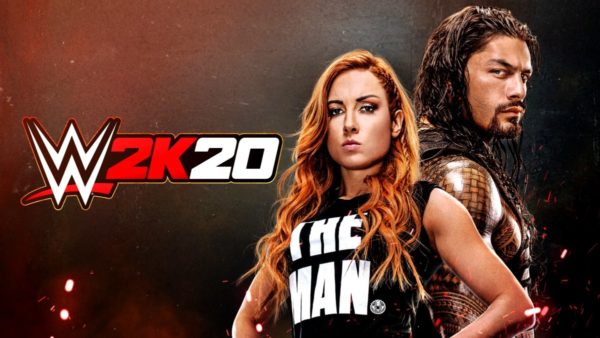 The WWE 2K franchise has never been known for its consistency, yet with last year’s 2K19 proving a distinct step up from the last few entries, there was hope that 2K20 would deliver further incremental improvements.

But this year’s entry unfortunately marks the sudden departure of series mainstay developer Yuke’s, leaving assist team Visual Concepts to complete the game solo. The result isn’t merely an underwhelming disappointment, but a shambolic embarrassment – a game so piecemeal and roughshod that it’s astounding 2K Sports let it out the door in such a state.

WWE 2K20 is in many ways a rather ironic emblem of the current WWE product itself; fundamentally misguided and showing little respect for a fanbase which, admittedly, needs to be far more eager to vote with its wallet (especially with so much superior competition on offer). But even accepting the famous loyalty of the “WWE Universe,” this game is shoddy enough that it’ll maybe be the one to finally put a dent in 2K’s coffers and demonstrate that this quality of product is unacceptable. Again, maybe.

The most basic test WWE 2K20 fails is that it’s not fun to play. Even a basic singles exhibition match is hamstrung by a number of curious decisions and flat-out failures of game design; targeting opponents and collision detection have never been the series’ strong suits, and yet, 2K20 is actively worse at both than any game in the entire lineage. 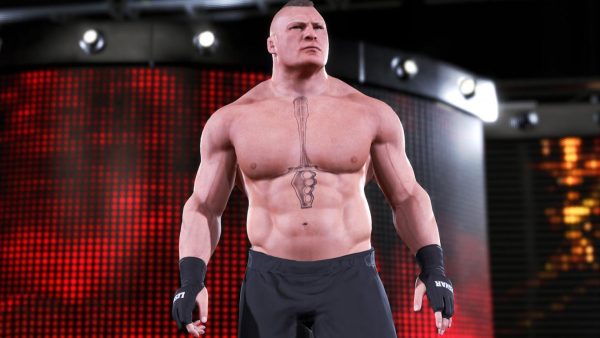 Something as basic as aiming an attack at the correct wrestler is fiddly and irritating, and countless times in one match, you’ll doubtless find yourself missing a splash or even a basic grapple because of the dissonance between your inputs and the floaty game response.

This is unaided by the introduction of a new and wholly unneeded control scheme, which in an attempt to streamline the controls for more casual players has become a baffling headache. Picking up objects in particular, especially ladders, is an exercise in self-chastisement, and to make matters worse, there’s no way for players to change the controls to a more “classic” scheme. On a wider level, this speaks to how oddly committed Visual Concepts is to some of their more ill-considered ideas. Options are a good thing, after all.

What isn’t good, however, is 2K20‘s clear lack of quality-testing of any kind. It shouldn’t be a surprise to fans of the series, of course; these games are riddled enough with bugs that many have long-speculated they’re actually deliberately left in for the sake of social media shares and ironic “hate-playing.” But this year’s edition transcends any entertaining awfulness to be genuinely insulting to paying customers.

Even with a day-one 13GB patch, the game is still overflowing with peculiar A.I. and physics bugs, from hair flailing in random directions to the ropes becoming seemingly possessed, and various visual elements of the creation suite turning inside out or disappearing completely. That’s just a few of the many that have been widely disseminated online already.

Most of the pre-release controversy, however, has focused on the visuals, and while the WWE 2K games have always felt at least several years retrograde, there’s a not-particularly-hyperbolic argument to be made that many of the facial models in this game wouldn’t look amiss in a PS3-era title – or in the very least, the recent shambolic Nintendo Switch versions of these games. 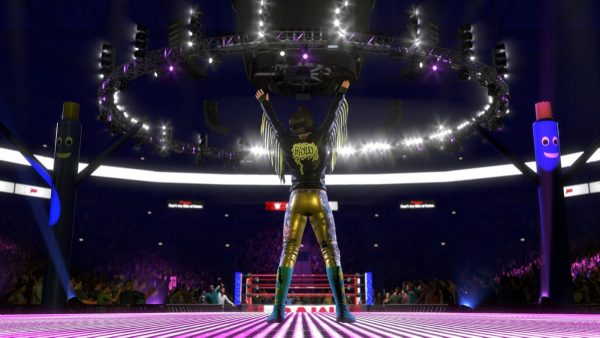 Though most of the wrestlers’ bodies look relatively decent – aided by some impressive glistening sweat effects – the faces look less like photo-realistic scans of the talent and more crude approximations thrown together in the game’s own Create-A-Superstar suite. But given some of the gorgeous creations committed fans have already rustled up in this mode – an easy highlight of the game, for sure – the comparison feels like a disservice, honestly.

Of the near-250 wrestlers on offer in the game, the overwhelming majority only scarcely resemble their real-life equivalents, with gormless, dead-eyed expressions which trip head-over-heels long before they can even be accused of leaping into the uncanny valley. Despite the expectation that more dev time would be devoted to making the higher-tier superstars look more authentic, there’s virtually no discrimination here; in fact, the likes of Becky Lynch and The Rock are among the most calamitous visual abominations in the entire game.

As usual, there’s a heap of different gameplay modes on offer, yet precious few of them are actually much interesting. You’ve got the usual exhibition slate, of course, though many of the kookier and more entertaining gimmick match types of yore are curiously missing – who doesn’t love an Inferno or Ambulance match?

For many the centerpiece will be the MyCareer mode, an hysterical 20-ish hour story “campaign,” in which the player takes control of a pair of wrestlers – goofball idiot Tre and determined Red – as they attempt to make it in WWE. Though it’s refreshing to see the franchise putting equal paid to male and female wrestlers, MyCareer is more a transfixingly awful curiosity than it is a genuinely fun time; the story itself is horribly written with even worse voice acting, and is just eccentric enough that it’s sure to have you laughing with an unintended regularity.

The formula is simple; watch an overwrought, ridiculous cutscene, wrestle a match with a series of convoluted objectives, rinse and repeat. In the interest of full disclosure, I could not bring myself to finish MyCareer before writing this review; the monotonous grind of the core gameplay loop, combined with an aggressive number of 30-second loading screens between every single cutscene and match, made it too much of an endurance trial to get through. But for a few hours, at least, it is the closest the game gets to fully embracing its own silliness, even if not always on purpose.

More “classy” but less compelling, however, is this year’s Showcase mode, which focuses on the Women’s Evolution of recent years, with the WWE’s Four Horsewomen – Charlotte Flair, Becky Lynch, Bayley, and Sasha Banks – taking center stage to recount their rise to superstardom.

The roughly 5-hour mode isn’t that dissimilar to MyCareer, honestly; you’ll sit through a horribly compressed video clip of one of the women discussing a pivotal match, recreate said match to a frustratingly slavish degree of accuracy – to the point that it’s no longer fun – and repeat. Given the importance of the Women’s Evolution, it’s a shame that it’s been given such a vapid, procedurally dull treatment here.

Outside of these main modes, there’s plenty on the periphery, though little of it interesting or entertaining. Universe mode gives fans a chance to book their own run of WWE programming – ala the classic GM mode – but despite some added assets from last year, largely feels like a staid, tedious slog for all but the most enthusiastic and committed fantasy bookers.

There are various superstar-centric Tower challenges to battle through, also; a series of matches with their own unique stipulations and goals, but honestly, this feels more like a chore than fun. As for the much-ballyhooed 2K Originals, despite their marquee presence on the game menu, they’re not available yet – and even when they do launch, most of them are icky paid DLC in a game that can’t even justify the base asking price. 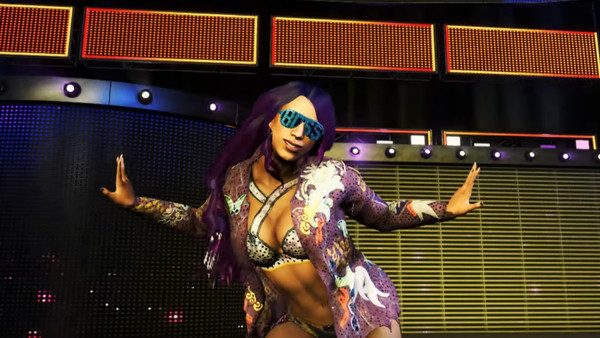 The array of creation modes are at least relatively in-tact for the most part, if you can forgive some of the aforementioned visual issues; the WWE 2K community is so stridently committed to crafting compelling ancillary content for fellow fans that, in the very least, it’s worth diving in to see what others have cooked up.

Perhaps the biggest and most consistent let-down across this franchise, however, is the online multiplayer. Any long-time wrestling fan has dreamed of the day where a WWE video game would allow extensive online matchmaking with leaderboards, rankings, tournaments and so on, but as elsewhere, WWE 2K20 is a sheer shambles in this department.

No matter the stability of your connection, online play is laggy and sluggish, and when matches involve six wrestlers, the match speed ramps down to agonising, near-unplayable levels. That’s not to ignore other peculiarities; entrances are disabled online, and you’re limited to a literal handful of ho-hum match types. And for those wondering, the years-absent online Royal Rumble is still M.I.A., sadly.

If loosely functional in the most basic sense that a wrestling game can be, WWE 2K20 is also a shameful disaster which fits only the loosest standards of “fit for sale.” It’s clear that Visual Concepts wasn’t ready to turn around a full game within a year, and the fault likely lies with 2K rather than strictly the put-upon developer. Perhaps had they been given a fallow year to re-adjust following the departure of Yuke’s, then we wouldn’t be wondering if 2K20 might finally be the straw that breaks fans’ backs.

As desperate as fans may feel to hand over their money for their annual October gaming ritual, the power is in all of our hands here; perhaps the only way to truly save this franchise is by voting decisively where it will be felt most by just re-playing last year’s entry instead.

Cons:
– Core gameplay is fiddly and unintuitive.
– Laughably poor character models.
– Even more glitches than usual.
– New control scheme is terrible.
– So many missing modes.
– Online multiplayer is a disaster.

Reviewed on PS4 (also available on Xbox One and PC).