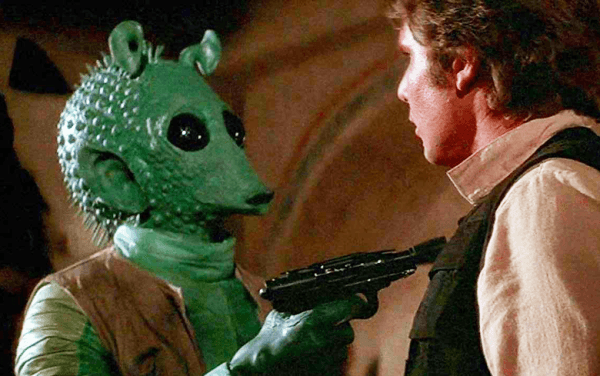 With the surprise arrival of the very first 4K versions of the Star Wars saga on Disney+ this week, it has been revealed that another change has been made to the infamous Han Solo and Greedo scene from 1977’s Star Wars: Episode IV – A New Hope.

Now, before you get too excited, Han still doesn’t shoot first; it’s simultaneous again, as with the 2004 reveamping of the 1997 Special Edition, and Greedo – a skilled bounty hunter – still misses his shot from point blank range. However, we do now get a brand new shot of the Rodian bounty hunter right beforehand, along with some non-subtitled dialogue – “Maclunky!” – which has already been heavily ridiculed online.

According to Disney, this latest change to the hugely controversial scene was actually made by George Lucas himself prior to the Disney acquisition of Lucasfilm back in 2012, presumably while he was working on 3D conversions of the Prequel and Original trilogies.

Will this be the last time we see George Lucas tinkering with his original films? Do you ever think we’ll ever get shiny 4K restorations of the original theatrical cuts from Disney? Let us know either in the comments or on our social channels @flickeringmyth…