Bandai Namco Entertainment, Outright Games and UK based development studio Funsolve have announced the release of Jumanji: The Video Game on Xbox One, Playstation 4, Nintendo Switch and PC.  A brand new adventure will see players take on the role of Jumanji’s greatest heroes, fight alongside their friends and seek to find the precious Jewels of Jumanji. The game’s launch trailer can be seen below and features the voice of Rhys Darby as your guide. 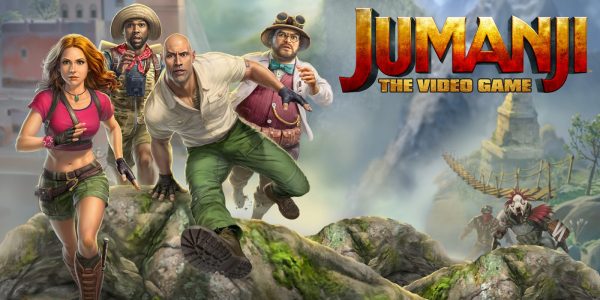 With Jumanji: The Video Game, players will take on the role of Jumanji’s greatest heroes, Dr. Smolder Bravestone, Ruby Roundhouse, Franklin “Mouse” Finbar and Professor Shelly Oberon and embark upon an adventure that will lead them through environments dominated by deadly marauders and plagued by vicious, exotic creatures.  Players will choose their favourite hero and master their unique abilities and weapons if they want to see home again.

Adventurers will be able to team up with friends in online or split-screen modes in order to seek out the precious Jewels of Jumanji and find a way back home.  As well as the jewels, players will also be able to hunt for Jumanji board pieces in the jungles, avoid the deadly traps in the underground catacombs and fight their way through the winding city alleyways.

SEE ALSO: Jumanji: The Next Level gets a new poster and trailer

“The day has finally come to release Jumanji: The Video Game into the wild and we couldn’t be more excited” said Outright Games CEO Terry Malham. “Since the beginning of the project we’ve been dedicated to bringing the fun filled, epic adventure from these iconic films to our video game and can’t wait for the world to be part of the action”

Jumanji: The Video Game is available now on PC and consoles.