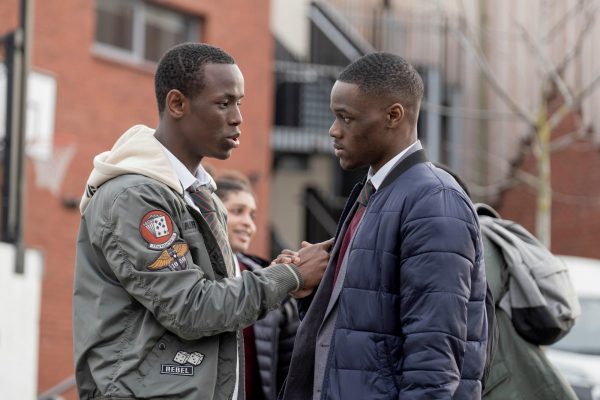 It’s been over a decade since the release of Kidulthood: Menhaj Huda and Noel Clarke’s hard-hitting British drama about youthful violence and lawlessness on the streets of London. In its portrait of a troubled, often underrepresented inner-city world, one that carried the same urgency of early ’90s American movies like Menace II Society and John Singleton’s seminal Boyz N The Hood, Kidulthood‘s gritty honesty made for a film that was both relevant and vital. In 2019, the fact that a film like Blue Story exists means that, sadly, such issues are still very much prevalent.

Written and directed by musician Rapman — real name Andrew Onwubolu — Blue Story is the feature length adaptation of his own YouTube series from 2014. Made in partnership with BBC Films and Paramount Pictures, and based loosely on Rapman’s own childhood, the film follows London teenagers Timmy (Odubola) and Marco (Top Boy‘s Micheal Ward), two school friends as close as brothers but, crucially, with different postcodes. Marco is confident and cocksure, with an older sibling already embroiled in street violence. Timmy, on the other hand, is sensitive and reserved, who soon finds young love with classmate Leah (Spence). Despite their friendship, Timmy and Marco seem headed in very different directions in life. But their relationship is laced with a lethal inevitability, which rears its ugly head when tragedy strikes and the pair are pitted against each other on opposing sides of a brutal gang war.

Narrated, in rap form, by Onwubolu himself, the film carries a reflective, if occasionally overly-sentimental quality. As the casualties begin to tally up on both sides, Rapman, like Singleton, Huda and Clarke before him, starts to paint a damning, topical picture of the stinging, cyclical nature of gang culture, while the archive footage that bookends Blue Story serves as a painful reminder of the reality that informs its narrative. The filmmaking isn’t always seamless, but there’s powerful, raw authenticity at work here, captured with assurance in both the impressively compelling performances of the film’s young cast (namely, its two leads) and Onwubolu’s skilfully aware screenplay: a script imbued with cultural nods aplenty (Game of Thrones; Netflix; British grime artists Stormzy and Dave) and such faithfulness to dialect that it runs the risk of alienating viewers not attuned to the distinct vernacular. Ultimately though, the painful truth of Rapman’s film lies in the futility of violence. A toxic blend of power, pride and status leads to tragedy, which breeds anger, which leads to revenge, which, in the end, only leads to more tragedy. While its morality tale might be a familiar one, the message Blue Story hopes to hammer home is no less impactful. And in Onwubolu, the man lifting the hammer, British cinema has an intriguing new voice.