Ricky Church reviews the third episode of The Mandalorian…

The latest episode in The Mandalorian held some fairly big moments as it balanced its focus on action and characters pretty well with Deborah Chow’s direction. It was another entertaining chapter in the series that expanded the backstory and lore behind the title character and furthered the Western feel the show has in its final act. By the conclusion, ‘The Sin’ proved to be another great step forward in the story.

One of the most prominent aspects to the episode was, once again, Pedro Pascal’s performance as The Mandalorian (going forward simply referred to as Mando now). Even without showing his face, Pascal conveyed much of the conflict within Mando over completing the job through his body language. Every head tilt, pause in motion or other subtle movement meant something. His line deliveries also felt strong and matched his body language. It’s pretty impressive how he’s able to do so much when he’s completely covered in a mask and armour throughout the series. While he still says little in ‘The Sin’, it gives a better idea about the type of man he is alongside some growth in character as he makes a significant choice that goes against his bounty hunting Guild. His arc throughout these first three episodes definitely evokes classic Westerns with the reluctant gunslinger anti-hero growing a bit of a conscience to do the right thing. ‘The Sin’ doesn’t rush his sudden change of heart, but does so naturally through his Mandalorian clan and hatred of the Empire.

‘The Sin’ is also notable for giving a better look at Mandalorian culture, or at least the culture he and his clan practice. Star Wars: The Clone Wars and Star Wars Rebels made it clear that there are several different sects of Mandalorian culture, especially after Clone Wars‘ Duchess Satine tried instituting a pacifist lifestyle which only led to a civil war. Last Star Wars fans saw of Mandalore, Rebels had a large group of them fighting against Imperial occupation for their planet’s freedom. Not much additional information is given here, but mentions of a purge and how Mandalorians seem to be scattered throughout the galaxy suggest things did not turn out well for them, adding just a bit more motivation as to why Mando decides to rescue the asset from Imperial cluthes. The little bits of backstory are intriguing and add to why Mando is so closed off as well as the mystery around him and his clan. It is also pretty cool for longtime fans to get further flashbacks to Mando’s childhood that include a Clone Wars battle complete with Separatist ships and Super Battle Droids.

On the action front, Debroah Chow certainly made her mark with ‘The Sin’. After the previous episode, and slightly the premiere as well, showed Mando getting a bit of a beat down, ‘The Sin’ established Mando’s reputation being more than simply his culture as he effortlessly took out Stormtroopers using a combination of deadly skill, stealth and brains to escape with his asset. It was really nice to see Mando flex a lot of his muscles, both mental and physical, and show off more tricks his suit is capable of. The action was fluid and clear and Chow certainly has an eye for presentation and creating some tense and emotive sequences (the scene where the Imperials took the asset away is definitely a memorable one). The final showdown between Mando, Carl Weather’s Greef and a ton of other bounty hunters was exciting, again calling back to the Western genre and fateful street duels, but the final few minutes are likely to be what ‘The Sin’ is remembered for. Without giving much away, the sequence seemed ripped from The Clone Wars or Rebels and brought to live-action in an astounding and jaw-dropping way. It’s enough to make one even more excited for the Obi-Wan series Chow is set to direct.

Other elements that helped make ‘The Sin’ the best episode so far were the supporting cast, namely Carl Weathers and Werner Herzog. Weathers gave a nice portrayal as Greef by adding some more layers to the Guild leader and showing he’s not one to mess around with while Herzog played his Imperial client with just the right amount of smug and coldness to make him even more compelling when he’s onscreen. Even Emily Swallow, the mysterious Mandalorian armourer and clan leader, added gravitas in her short screentime in how she commanded the clan and spoke about their ways. The visual effects also stood out due to their emphasis on practical effects while Ludwig Göransson’s score did much to elevate the tension and moody atmosphere. There really is just so much about The Mandalorian‘s production that is making it one of the best pieces of Star Wars to come along in the franchise. 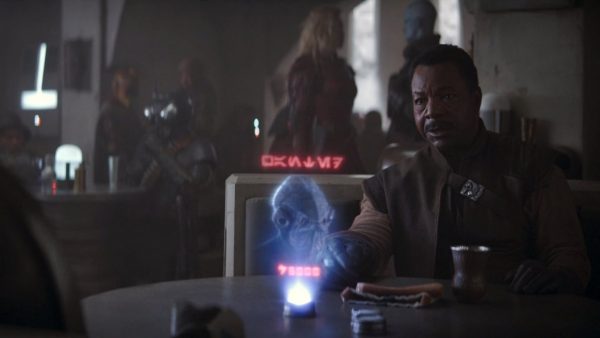 ‘The Sin’ just knocked The Mandalorian out of the parks on all counts. From Pascal’s acting to the score to, most of all, the action, there is a lot to enjoy and pour over throughout the episode. Deborah Chow made her mark well with this installment due to her eye for action and balance with the character development Mando achieved. It definitely doesn’t make the wait for the next chapter any easier.