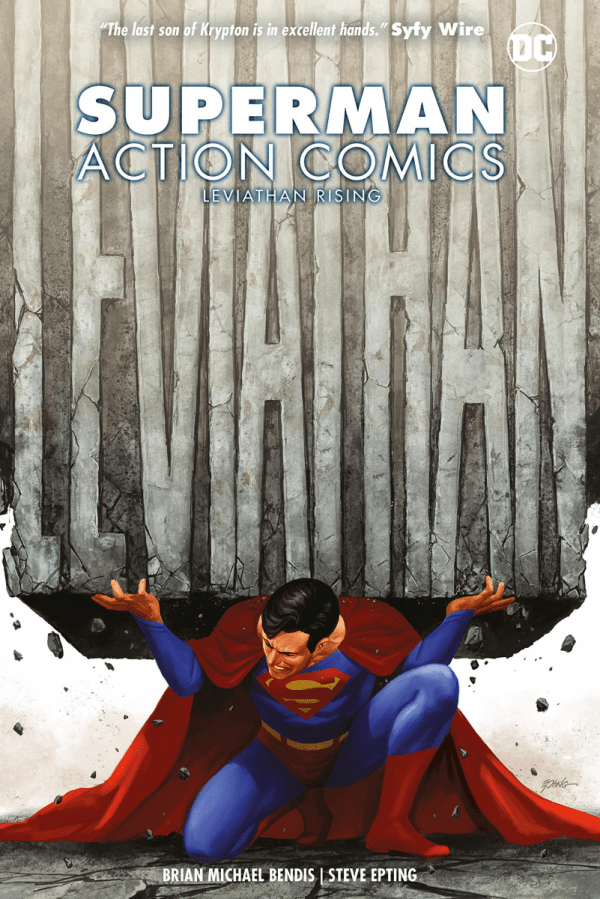 Brian Michael Bendis’ run on Action Comics takes a bit of a swerve from what the first volume was as Superman: Action Comics Vol. 2 – Leviathan Rising takes time to set up a big DC event that is literally named Event Leviathan. However, despite the build-up to the event, Bendis crafts a fairly engaging story with Superman and Lois Lane equally sharing the focus as they track down the terrorist organization Leviathan, previously led by Batman’s ex Talia al Ghul, and what their plan is. With art from Steve Epting, Leviathan Rising is an entertaining and visually compelling story even with its flaws.

Whereas the first volume of Bendis’ series was very Metropolis focused, featuring a secretive group of criminals operating in ways to remain off Superman’s radar, Leviathan Rising is an expansive DC globe-trotting story as the mysterious organization strikes at all of DC’s government entities dedicated to meta-humans and near dismantles them completely. There’s an air of mystery to the events as Superman and Lois try figuring out who and what caused all these attacks to the point where its less of a Superman action adventure and more of a Clark Kent and Lois Lane investigative thriller.

Seeing Clark and Lois work together in this way is one of the book’s best aspects. Bendis does a great job capturing Lois’ voice throughout the story. The interactions between her and Clark are both entertaining and in character, especially how she teases him. Bendis also does a nice job at emphasizing how revered Lois is throughout the DC universe, whether its through her colleagues at the Daily Planet, people in the government or even Superman’s enemies. One element in the story sees Clark and Lois go undercover to find out more regarding the history of Leviathan and its connection to some of the government agencies around the world.

The focus on Clark and Lois is very nice to see, though some things get a bit lost as the story goes on. Lois makes a pretty big decision that changes her relationship with her father, General Sam Lane, but once it happens its barely even brought up afterward. Lois doesn’t even tell Superman what she told Lane, nor is there any kind of meeting between Superman and Lane since it changes their dynamic as well. Other supporting characters get pushed to the sidelines and shrugged off after a while, such as Jimmy Olsen, Amanda Waller or General Lane. While Bendis’ focus on Superman and Lois is nicely done, the placement of the other characters are not given much purpose beyond advancing the story in some way or providing a twist. Leviathan Rising also suffers from the fact it is purely set up for Event Leviathan. The book doesn’t really answer any of the questions it presents, instead leaving them as teases and red herrings that aren’t as tantalizing as it thinks. Because of this, it doesn’t stay afloat off its own merit.

Steve Epting’s artwork is pretty detailed throughout the book. His character work is well done as he shows nice movement and subtle facial work between the panels. His Superman looks every bit as mighty as he seems while Lois looks feisty as ever. The chapter where they both go undercover in different identities is memorable because he makes the pair look like Lois and Clark without making them look like Lois and Clark. Brad Anderson provides a lot of nice colours that compliment Epting’s art and makes it a fairly vibrant book, though he makes several panels a little too dark in their nighttime settings. The book also include the Superman: Leviathan Rising special with Yanick Paquette on art duty and Nathan Fairbairn on colours. Paquette’s artwork is gorgeous through his characters and creative panel layouts while Fairbairn’s colours make the artwork pop.

Superman: Action Comics Vol. 2 – Leviathan Rising is a fun and entertaining story with Superman and Lois playing investigators, but you can’t shrug off the feeling that this is just set-up rather than a story of its own. Bendis writes Superman and Lois well enough, but the fact other characters are pushed to the side, sometimes rather abruptly, leaves it feeling disjointed. The artwork from Epting, Anderson, Paquette and Fairbarin make the visuals stand out, but Leviathan Rising, though enjoyable, is not quite a good book to read on its own.