Xbox Games with Gold for February 2020 has been announced and it’s a month of thrill packed action.  This coming month players will be able to experience a month of racing around the Isle of Man, Loftcraftian horror, hack ‘n’ slash adventure and sci-fi battle among the most famous of war among the stars. 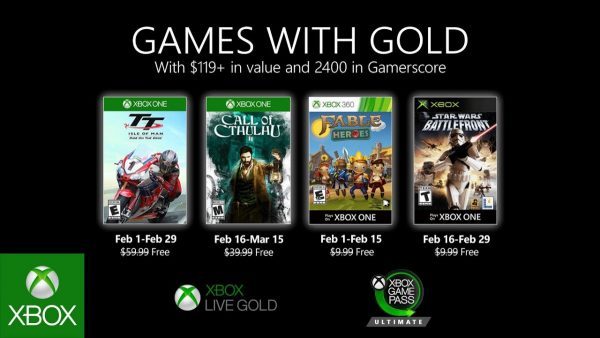 From 1st February, Xbox One gamers will be able to get on their bikes with TT Isle Of Man: Ride on the Edge.  Developer KT Racing provides players with 2 wheeled excitement as they take part in the gruelling, yet legendary, Snaefell Mountain course and all its faithfully reproduced 37.73 miles.  Choose from 38 motorbikes to become the champ of the track as one of 25 official riders.

February 16th also brings the Lovecraft survival horror Call of Cthulhu from Cyanide and Focus Home Interactive.  In this role-playing survival horror, take the role of private investigator Edward Pierce as he sets out to the eerie Darkwater Island to look into the case of the Hawkins family, who mysteriously died in a fire.  Darkwater Island is home to a strange and suspicious people and players will need to tread carefully while they uncover the truth of the deaths.

Xbox 360 players will get the chance to play Fable Heroes,  this hack and slash adventure game from Lionhead Studios will have players take the role of one of 12 characters from the four Fable games and journey through Albion fighting enemies, such as Chesty, Hobbes, Beetles and Hollow Men, to collect coins that can be used to buy new characters and items.  Finally, from 16th February is Star Wars: Battlefront from the days of the original Xbox.  Both this and Fable Heroes are available for Xbox One thanks to the much loved backwards compatibility feature.

Leave a message below or on Twitter @FMyth_Gaming and let us know what you think to this month’s selection of games.