Kabam has released new details for their upcoming real-time mobile Action RPG MARVEL Realm of Champions.  This action RPG will whisk players away to the Battleworld where they will ally themselves with one of several Marvel inspired houses, each themed after a particular Marvel hero. 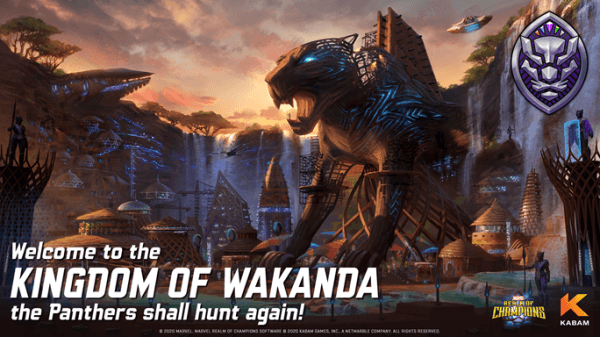 The latest details revealed provides information on the Kingdom of Wakanda, the home of Black Panther.  After Wakanda was abducted into The Battleworld by Maestro the land was thrown into chaos and after challenging Maestro to ritualistic combat, King T’Challa was killed.  With a political chasm suddenly adding to the chaos caused by Maestro’s BANISHMENT, it fell on Queen Shuri – daughter of King T’Chaka and Queen Ramonda and sister to King T’Challa to lead her people and preserve what remains of Wakanda.

Under the guidance and leadership of Queen Shuri, the people of Wakanda are setting out to reclaim what was theirs and to rectify what was lost.  The other houses can only dream of what new breed of Black Panther prepares for its next hunt.

The Battleworld is a forbidden planet behind the Space-Time Barrier, where factions supporting other Marvel heroes exists.  Players will be able to kit their character out in heroic gear and align themselves with one of the other houses, including the House of Iron (Iron Man), Spider-Guild (Spider-Man), Patriot Garrison (Captain America), Pyramid X (X-Men), and many more.  Then ally themselves with friends and explore the Marvel-inspired landscapes, or battle it out in localised battle arenas across a variety of Player vs. Environment (PvE) and Player vs. Player (PvP) modes.

Look out for MARVEL Realm of Champions coming later this year.