I don’t really consider myself “up to speed” when it comes to speakers on my PC.  Don’t get me wrong, I’m not ignorant when it comes to what makes a nice noise – I grew up with a room surrounded by Bang & Olufsen perfection, which were attached not to a Hi-Fi deck but individual units to make sure the music sound edamazing.  So I know noise, it’s just PC noise I never considered to be, well that important. 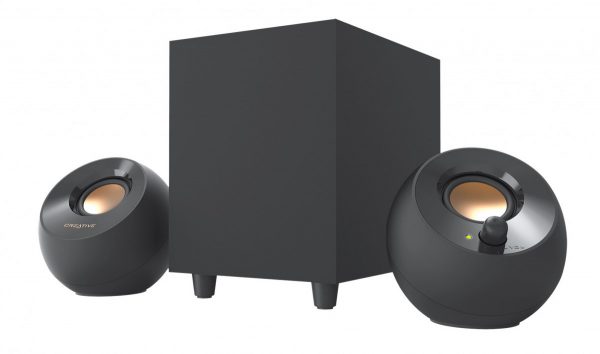 I’ve known all the iterations of PC speakers too if I really cast my mind back.  I’ve gone from having to make sure they were shielded for they were screwed to the sides of the monitor, to puny ones that try their damnedest even though all they’ve got to work with is little more than “bell wire” to power them.  I’ve seen them all – so I thought – and it’s due to these past efforts I’ve always considered PC music (along with sounds effects) never honestly really requiring anything special. So when I was asked if I wanted to try the Creative Pebble Plus 2.1 Speakers, I thought, ‘Sure I’ll give them and go, though… they’re just speakers’.

As said above, I’m used to both the simple & basic things.  Two speakers plus wire, perhaps a plug to power them up and there we’ll get a bit of noise, but when the Creative Pebble Plus Speakers arrived and I opened the box I was already thinking, ‘Is this really for the PC!?’.  I was already, before I set it all up, impressed with what I was seeing here. Two great looking speakers and solid wooden subwoofer, all ready to deliver some nice noises.  Mere minutes later, after tearing out my old speakers and setting up these new Pebble Plus ones I was ready to go, but what do I test them on? 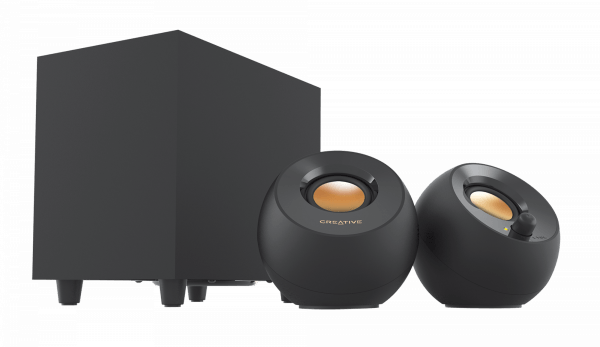 Loading some good old fashion Heavy Metal (hello Slipknot) and stupidly having the Creative Pebble Plus Speakers turned up midway, believing them to be around the same power as my old noisemakers my desk became alive!  It literally roared! Trying something a bit more timid, I went to a few YouTube videos and this is where it all became slightly more interesting.  Voices which initially were flat now seemed to have depth or found themselves leaning to one side of the desk rather than the other, clearly depending on how the creator recorded their video.  It was truly fascinating to hear so many old voices in a new light.

Now to gaming and this is what really showed the speakers off. Before – as said – I’ve happily put up with the flat noise, but here I was treated to what the musicians and sound developers have created for me to really enjoy.  In the past I’ve turned (and I’m sure a lot of us have) music to low (or off) and sound effects to low, for I’ve found either irrelevant or irritating, but here with the Creative Pebble Plus Speakers showing them off, I was wondering why I’ve been silencing the background noise for so long.  Then I remember – I had poor speakers. 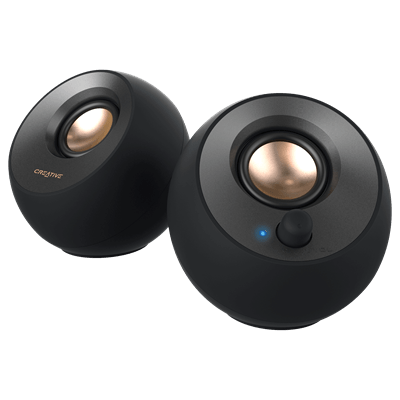 There are however two minor irritations with these speakers and they are minor.  The first being there is no place to plug in a set of headphones, which to myself is a common want at the PC.  The second is there is no way to control the Bass or Treble. Though this may not be a concern for the rest of the world, I personally like to alter my own levels on occasion.  If the people at Creative ever do deliver an updated version of this unit, it would be great if they thought about these two additions.

For those that like technical specifications and I know there’s a lot of you here they are:-