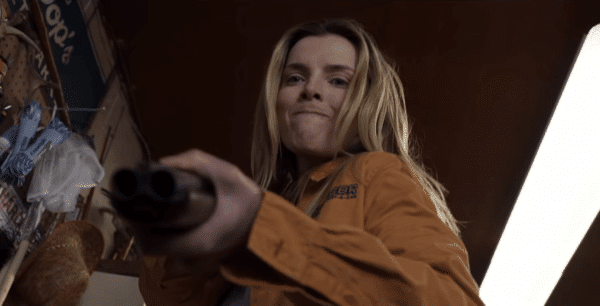 Yanked from being simply another no-budget-to-box-office Blumhouse success by an unfortunate set of real-life events that caused Universal to pull its release, The Hunt is finally dropped into cinemas with the kind of marketing befitting of the video-nasties of old. Ooooooh, this is the film that was banned? Was it too political? Why are MAGA America so upset about it? How extreme is the violence?

Ultimately The Hunt isn’t really a film too concerned with any of those questions, and nor should you be. It’s simply a scuzzy little survival flick, one that gets to poke fun at everyone and everything, and has a literal blast doing so.

It’s also not worth getting too attached to any actors or characters you might be fond of, because most of them are caught up in said blast and scatter to the four corners of the screen. The Hunt takes great delight in the Looney Tunes way in which it dispatches with its archetypes, to which you’ll react with varying degrees on the WTF scale. It’s all very cartoonish and silly, a little bit like a Walking Dead splatterfest, or Shaun with his cricket bat, but Nick Cuse and Damon Lindelof’s script just about stays upright walking that fine line between comedy and horror. Grounding the gore is the excellent Betty Gilpin: sporadically snarling, potentially unhinged, a little like a Mississippi Lara Croft who didn’t inherit the mansion. Her asides and mannerisms are delicious, and amongst a roll-call of canon-fodder, she’s worth rooting for in terms of character, and a desire to achieve some form catharsis from her arc.

She is certainly more interesting than the overriding mystery as to why this group of disparate ‘deplorables’ have been selected for execution. The payoff is a lovely little sleight-of-hand, but along the way it feels like a seen-it-all-before extension to The Purge universe, by way of the superior Cabin in the Woods and Ready or Not.

As for the subtext, sorry, straight up on-the-nose text, The Hunt is like below-the-line comments manifested as screenplay – “snowflake”, “redneck”, “climate change”, and “constitutional rights” are just a few of the stock-phrases to make up the social-media timeline bingo.

However, it’s not as one sided as you might expect, with woke views also taking a bashing, and largely because almost everyone on display, hunters or prey, are a quite loathsome set of beings not really worth taking seriously. If you’re offended by any of it, just keep telling yourself that it’s only a movie, and a few weeks down the line we’ll all have something else to be upset about.

Tackling keyboard warriors, cancel-culture and every sociopolitical touch-point you can imagine, and wrapping it all up in a hardcore Hunger Games that’s the very definition of ‘won’t be for everyone’, The Hunt is a lean, nasty kick to the moral compass, all buoyed by a terrific performance from Betty Gilpin.